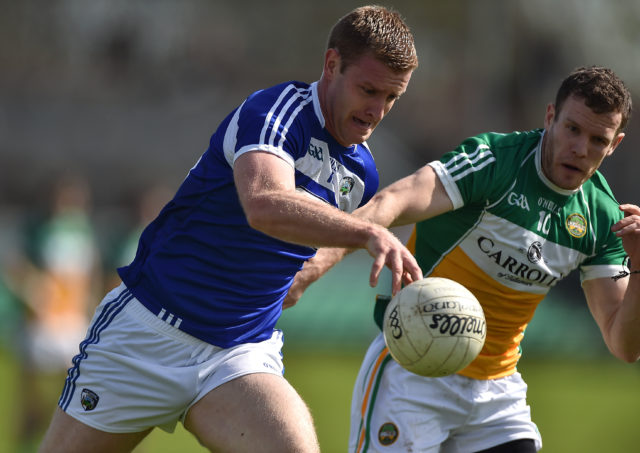 The Laois footballers still have a chance of gaining promotion from Division 3 as two second-half goals saw them past Offaly in Tullamore.

Laois played against the wind in the first half and trailed at half time but goals from Evan O’Carroll and sub Paul Cahillane saw them turn things around and win.

Laois made a decent start to the game with Eoin Lowry linking up with Evan O’Carroll for the game’s first score.

Anton Sullivan responded for Offaly but Laois were very slick in the opening 15 minutes as points from Donie Kingston, Kieran Lillis and Ross Munnelly moved them three points ahead.

But just like in their previous away game when they went down to Westmeath, Laois lost their way in an attacking sense as Offaly turned them over and counter attacked.

Laois also struggled at midfield with three of their own kick outs going astray and allowing Offaly gain primary possession where Cathal Mangan, Bernard Allen and Peter Cunningham all pointed to level matters after 20 minutes.

Allen then gave Offaly the lead and although Eoin Lowry replied after 23 minutes, this would be Laois’s final score of the half.

Laois’s shooting let them down with six consecutive wides while Offaly finished the half with scores from Allen, Paddy Dunican and Niall Darby.

They could have had a goal too but Shane Horan shot wide after a fine run and Offaly led 0-8 to 0-5 at half time.

The rain began to fall at the start of the second half and Laois instantly cut the deficit through Ross Munnelly.

Bernard Allen and Evan O’Carroll then swapped points before a Ruairi McNamee score made it 0-10 to 0-7 after 42 minutes.

Evan O’Carroll landed a free and then Kieran Lillis pointed before Laois got a great goal after 47 minutes.

Donie Kingston floated in a high ball and Evan O’Carroll rose like a salmon to catch it before burying it into the net.

Ruairi McNamee left one in it but a rare Benny Carroll Point gave Laois breathing space as we entered the final quarter.

Laois then got their second goal when John O’Loughlin executed a brilliant turnover and picked out Conor Boyle who found fellow sub Paul Cahillane who scored.

Colm Begley put Laois six ahead but Offaly refused to go away and kicked three in a row to leave three between them with six minutes remaining.

Bernard Allen cut the gap to two but a Paul Cahillane mark stemmed the flow for Laois.

Three minutes of injury time were signaled but Laois held on.

Laois will now play Carlow next Sunday in Laois’s final league game but the picture will only become clearer on the permutations after the rest of the Round 6 games.

Longford defeated Sligo to move to seven points while Down were taking on Carlow. The game between Westmeath and Louth was postponed because of an unplayable pitch.