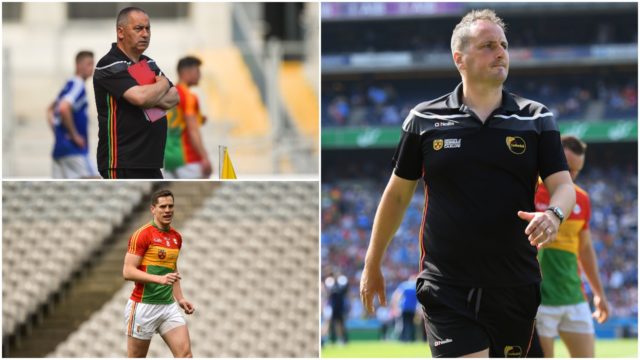 The Carlow footballers have been dealt a huge blow ahead of the upcoming Leinster championship with the news that three of their members are facing lengthy suspensions.

Manager Turlough O’Brien, coach Stephen Poacher and midfielder Brendan Murphy have all been hit with GAA bans following their loss to Down in the penultimate round of the National League.

The trio were due to be suspended for the meeting with Laois in O’Moore Park but they were allowed to take part as they appealed the initial suspensions.

And following a meeting in Croke Park last night, all three have been handed bans by the Central Hearings Committee following incidents at the end of their loss to Down involving referee James Bermingham.

All three were originally charged with “Minor Physical Inference with a Referee” and “Threatening conduct towards a Referee”.

However, the CHC found that only the second charge of ‘threatening conduct towards a referee’ could be proven and decided that the first charge could not in all three cases.

Midfielder Murphy and coach Poacher have been hit with 12 week bans while manager O’Brien has been given a 20 week ban.

However, if they are unsuccessful, the trio will miss Carlow’s Leinster football championship quarter final which will be against the winners of Meath and Offaly.

Should Carlow come through that game, and Laois defeat Westmeath, a repeat of last year’s Leinster semi final showdown would be on the cards.

However, all three would be banned for that game too.