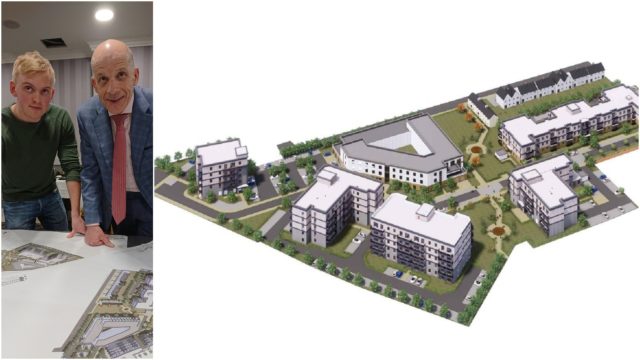 A concept masterplan for the latest major development proposed for Portlaoise has gone on public view.

Commuters who crave a car free lifestyle will be tempted by the scheme which is just across the road from the railway station, off Coote Street on the Mountmellick Road and a hop, skip and jump into the town centre in the other.

The developer is Pat Flanagan, who has established a special purpose vehicle, The Maltings and Granary Ltd, for the purpose of delivering this particular project.

Pat Flanagan is no stranger to projects of this nature or scale as along with his brother Seán, their company Owenass Developments were responsible for the construction of Fairgreen, Esker Hills and Bellingham in Portlaoise, as well as taking over the then incomplete ghost estate of Rinuccini on The Dublin Road and finishing it out properly.

The proposals for their latest undertaking went on view at a public information event in the Midlands Park Hotel this week and there was a steady flow of interest from residents and representatives of the local St Peter’s Church of Ireland as the development will be in close proximity to the church, to the rear of its property.

The Maltings, not to be mistaken for other developments of a similar name, are envisaged to be a series of apartment complexes to be built in a number of phases contingent on public feedback and subsequent planning applications.

The development is to be built on a six and a half acre site, off Coote St. on the Mountmellick Road, with vehicular access via Harpur’s Lane.

There will be pedestrian and cycle access only from the Coote Street side, with the train station then literally across the road.

This site previously got planning permission back in December 2004 for a retail development and 9-storey office block on the same parcel of land.

The developers, Maryborough Construction, with an address at Main St. Roscrea, did not proceed at the time and that permission has now lapsed as the five-year duration has expired.

The Council imposed a total of 29 conditions on that development including a development charges levy of €1.5m and two further charges of €176k contribution for the Portlaoise Orbital Route and €111,760 towards the Portlaoise Main Drainage Scheme. 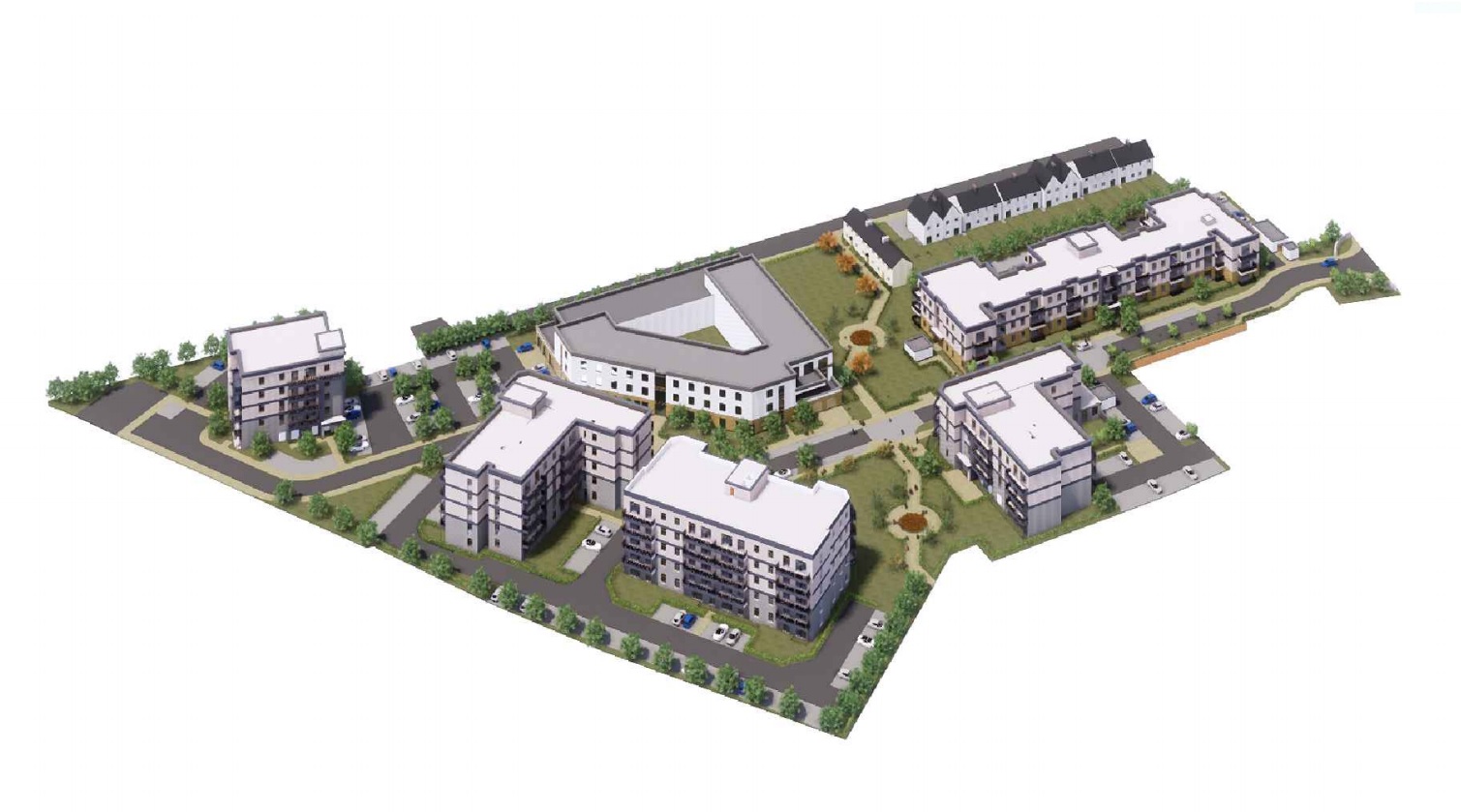 This new development does not include the landmark red brick building to the front and that is so familiar to those passing by just at the railway bridge on the Mountmellick Road.

This distinctive building is a preserved structure and for years operated as a depot for malting barley, with long queues of tractors drawing grain being a familiar sight during the busy harvest season.

The edifice used to also house a large clock, which is no longer functioning, on its façade.

This structure is in the ownership of a separate company, Holli’s Corner, and is the subject of their planning application currently before the Council for change of use from industrial to residential, to refurbish the existing protected structure and to incorporate 8 new apartments. The architect for that project is Leon Kruger.

Meanwhile the Flanagan brothers and Owenass Developments have a live planning permission for thirty-one 3-bedroom semi-detached houses at Roselawn, off Harpur’s Lane, which would front on to this latest proposed development at the Maltings.

It is not yet decided whether or not these houses will proceed independently or be constructed in tandem with the first phase of 40 apartments.

The developers are at pains to emphasise that their overall proposal is a concept masterplan and that they are actively engaging with the public and all interested parties for their views and feedback as part of this consultative phase.

Pat Flanagan and his son Tony were both on hand this week to meet with members of the public, to show them the various plans and drawings and answer any of their questions.

They said that at the earliest no construction would commence until at least five months after permission was granted.

Overall the project envisages 176 apartments in 3 and 5-storey blocks, a crèche and childcare facility and a 100-bedroom nursing home.

As some of the apartments would be running alongside in close proximity to the railway line the company have engaged acoustic engineers to advise on the fabric of the buildings. 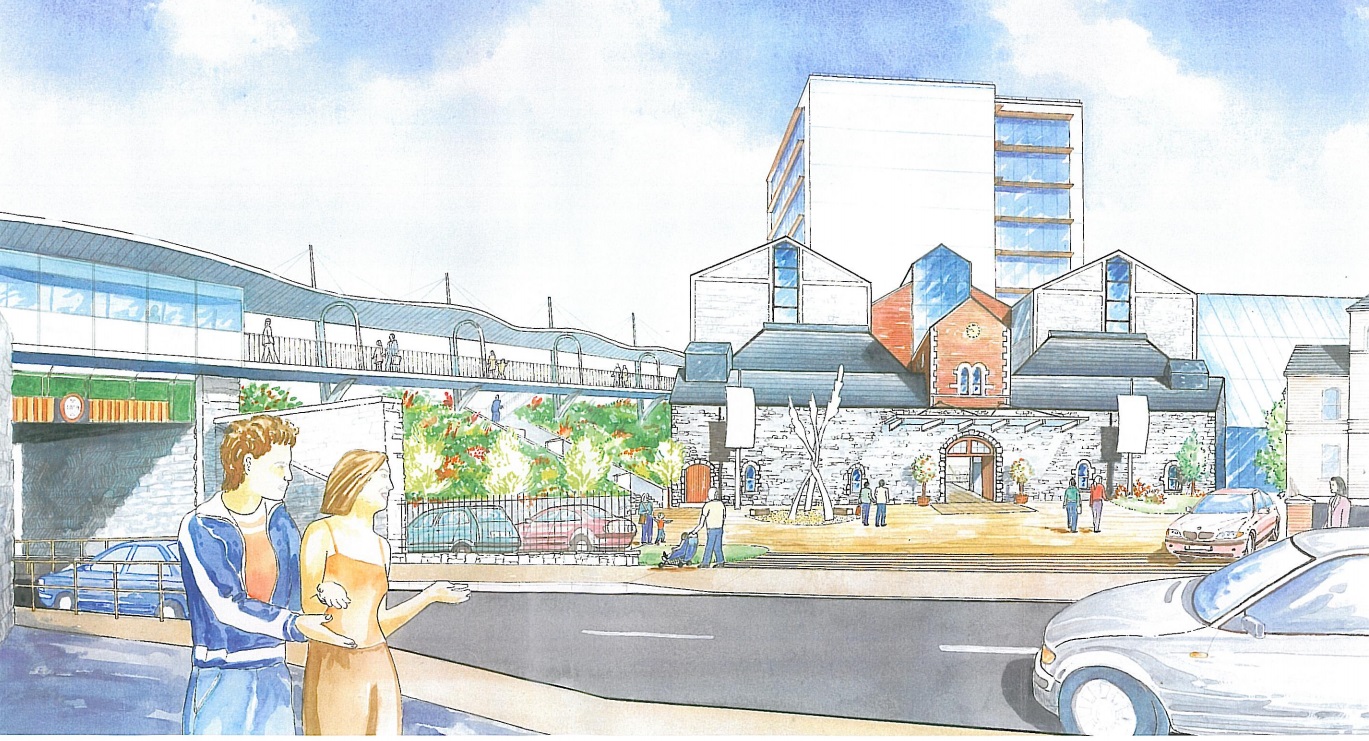 The apartments planned will be predominantly 2-bed with some one-bedroom options.

There is no immediate guide price, but the development is one of a number of new projects proposed for previously derelict or disused sites within or near the town centre, with others mooted for the old convent, the formers CBS site and the derelict County Hotel on Main Street.

At the public information event Pat Flanagan outlined that each of the apartments would have their own individual car parking space, although due to their location he envisaged many of the occupants would not have cars.

The apartment complex would be operated by a management company he said for best practice and good standards.

The first phase of this new The Maltings development is seeking planning for 40 purpose built apartments exclusively for the elderly and disabled.

These would be provided in partnership with an approved housing body and would fulfil the developer’s Part 5 social obligations on the overall project.

The estimated overall cost of the entire development is in the region of €35m and the architects are Melville Dunbar Associates.