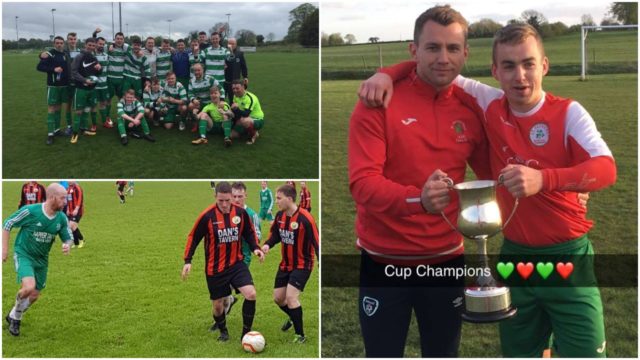 It was a very busy weekend on the local soccer front with St Patrick’s Boys and Mountmellick Celtic collecting silverware.

Stradbally Town reached the Combined Counties Cup semi finals where they will play Derry Rovers. Mountmellick United will face Monksland in the other semi final.

Check out a roundup of all

There were two big successes for Laois clubs who play in the Carlow League this weekend.

On Saturday, St Patrick’s Boys B claimed the Whites Total Health Pharmacy Division Cup by defeating Parkville United B 2-1 in the final.

St Patrick’s Boys, who are based in Graiguecullen, fell behind early on but came back brilliantly to win.

Jamie Malone and Peenie Whelan scored the goals which helped them claim the trophy.

On Sunday, Crettyard United were in action in the quarter final stage of the LFA Cup where they faced Dublin side Usher Celtic.

They emerged 1-0 winners and now march on to the last four of this Leinster cup competition.

This meeting in Mullingar saw both clubs contesting the first cup finals in their history.

This was a very tight affair that Celtic were able to win with a first half goal that was set up by Gary Hofmeister.

He won the ball and released his brother Sean to beat the Kenagh United defender and keeper to the ball and finish calmly.

The second half began with great pressure from Kenagh pushing for an equaliser but they found the defence of Stephen O’Neill, Michael McDermott, Kurt Clover and Stephen Conroy all in inspired form.

When they finally broke through they found man of the match Eugene Nolan unbeatable in the goals.

He made three out this world saves in the second half to keep the Celtic lead intact.

With Paul Allen and Jordan Williamson sitting in front of the defence and Jamie Clover and Oran Murphy running themselves into the ground, Celtic managed to hang on and bring back the cup.

A Jody Dillon hat-trick fired Stradbally Town to the semi finals of the John Farrell Combined Counties Cup in Offaly this morning.

Stradbally started the smarter and were unlucky not to go ahead with a good Jack Langton effort crashing off the crossbar after good work from his uncle Jimmy on the right.

Horseleap went ahead on 12 minutes totally against the run of play which kicked Stradbally into fifth gear.

A fine finish from Benny Lawlor on 24 minutes and then a Jody Dillon header seen the Laois men go in 2-1 up at the break.

Stradbally started off the second half the way they finished the first and Jody Dillon scored a fantastic second before finishing off his hat trick in the 62 minute with a fine finish.

Jack Langton finished off the scoring after some good work from Benny Lawlor.

A great overall team performance from Stradbally who look forward to another Semi-Final against Derry Rovers.

But before that, its Stradbally and Gentex next Sunday in the CCFL Division 2 Cup Final in Tullamore.

Clonaslee got off to a dreadful start and conceded ten minutes into the first half. The gap was two after 20 minutes following an error by keeper Seamus Rosney.

Clonaslee finally settled on the half hour mark with Bob Downey going close and they almost scored on the stroke of half time but Paddy Hyland’s effort just went over.

The Laois side remained on top on the resumption of play but they just couldn’t find the net.

Derry Rovers made the cup safe with two goals in the final 15 minutes to send the Paddy Cotter Cup to Offaly for this season.

SEE ALSO – Cow problems, the smell of Supermacs and ancient headstones – it’s our Tweets of the week