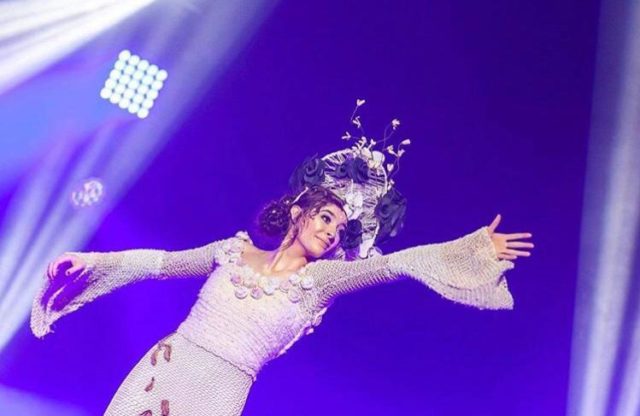 Huge news for Laois has come out of the national Junk Kouture as it was revealed that one group won the Eastern regional final stage at the grand finale of the competition on Thursday, May 2.

‘The Truth Lies Within’ from Scoil Chríost Rí came away with a coveted prize at the prestigious design competition.

‘The Truth Lies Within’ is made up of model Grace Kearney, Rachael Lewis and Amy Doyle. The front of the dress is hand knitted from different twines and crocheted flowers.

One spectator told LaoisToday, “It was incredible. It’s great for the school and to see the group do so well out of 80 final competitors on the day is fantastic.”

Also representing Laois on the day was the Mountrath CS team of Fianna Byrne, Roisin Scully and Orla Brickley with their creation, ‘The Butterfly Effect’.

Junk Kouture is a competition to inspiring young designers in second level education to use everyday junk materials to create striking works of wearable art.

Reaching the final is an enormous achievement, particularly given that the Junk Kouture competition captivated 24,000 students this year.

Over 50,000 people filled the 3Arena for this year’s competition which saw 80 dresses take to the stage.

Well done to both ‘The Truth Lies Within’ and ‘The Butterfly Effect’.