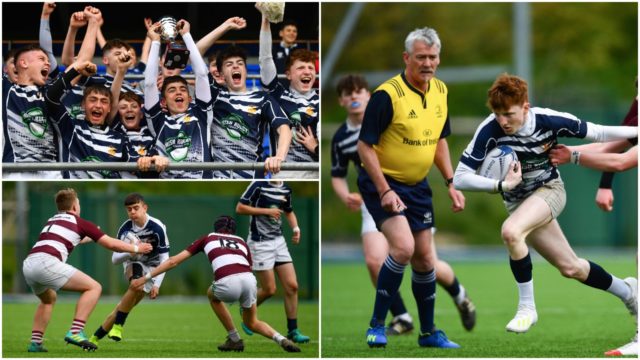 Portlaoise U-16s travelled to Donnybrook on Monday May 6 to play Tullow in the Leinster Plate Final and completed a remarkable victory.

A previous meeting in the year had seen Tullow winning by a cricket score so Portlaoise went into this game firmly as underdogs. This was not an easy game for Portlaoise and they had a lot to prove to themselves after their previous encounter.

Portlaoise Captain Ben Dempsey kicked off in the bright sunshine and Tullow’s powerful pack were on the attack. Instantly they were met by the Portlaoise forwards in what became a feature of the game from both sides, a crunching tackle.

Portlaoise overturned the ball with some impressive work from Michael Rigney at the break down. Portlaoise were pressing hard and looking for the first score of the game. Perhaps it was nerves on the day but the final ball with the try line gaping just wasn’t happening, yet.

Tullow’s big men lead by an impressive 10 started firing quick ball out the wings and with some neat play and an overlap they were in for the first try of the game.

Tullow kept the pressure on and exploited the wings again and were in for what was a certain try but for an outrageous try saving tackle from Ben Reddin.

Portlaoise were now under real pressure but never lost composure or dropped their heads. Portlaoise won the ball back and went on the attack again led by Eli Heffernan whose powerful runs all day were one of many highlights from this Portlaoise side but again fell short by impressive tackling from the Tullow men.

Time for Tullow to turn on the style and that they did. Their Loose Head prop received the ball inside his own 22 and ran with frightening speed along the touch line crashing into several Portlaoise players leaving all of them on the ground to score an incredible individual try.

Portlaoise were back on attack again and their never say die attitude brought them back inside the Tullow half lead by the ruthless running of Mick O’Brien who was smashing through the Tullow backs as if they were skittles with Reece Campion barging his way through the Tullow line time and time again making the yards that would eventually suck the energy out of Tullow. 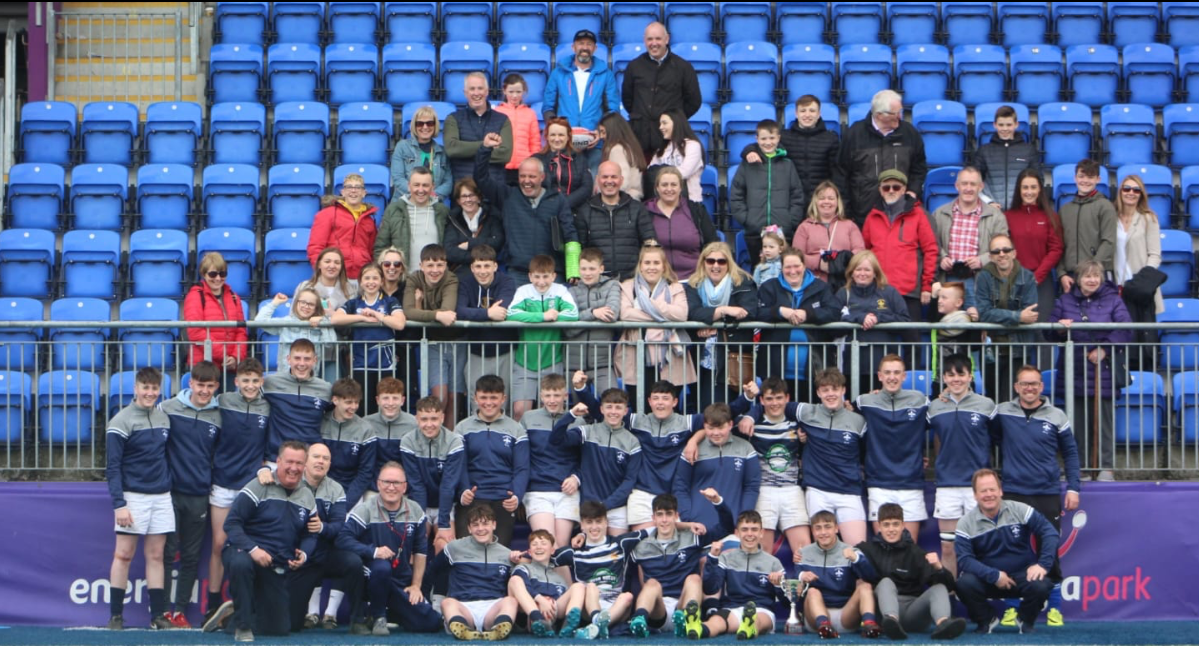 The Portlaoise nerves had settled inside the Tullow half and a neat interchange of play allowed Jim Peters to ride 3 tackles and get Portlaoise’ s first try.

Tullow continued as they started running hard at Portlaoise only to be met each time with bone crunching, energy sapping tackles led by Liam Og Brennan who was a constant torn in the side of Tullow.

Tom Kirwan was dragging out of Tullow men all day stopping them time and time again. But Tullow were not going to be stopped and got across the try line again and lead 7-17 at half time.

Some inspiring words from coach Declan Kelly at half time had Portlaoise firing on all cylinders in the second half.

Tullow kicked off and Portlaoise were in possession on their own 22. Portlaoise had the ball but Tullow were closing fast.

Ben Dempsey spotted the gap behind Tullow and called played a delicate chip over the top that had Ben Reddin running onto the ball, gathering it and offloading to Adam Hanrahan, son of former Munster great Paudie Hanrahan, who showed a clean pair of heals to the chasing Tullow pack and despite a last-ditch tackle managed to score a brilliant try. 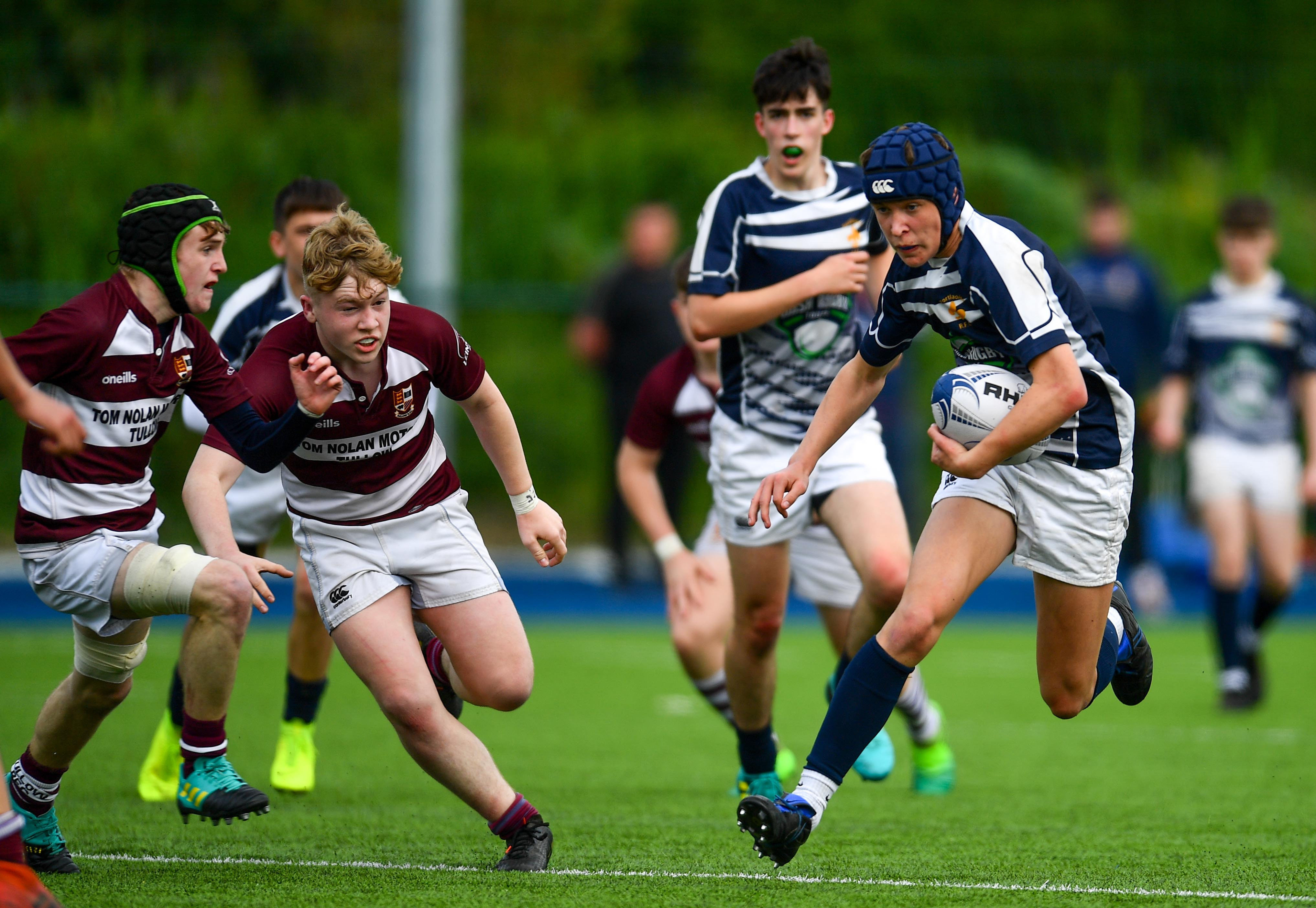 Portlaoise had their tails up and after impressive work from the Portlaoise forwards in the first half it was now up to the backs to do their work.

Joseph O’Toole, son of Mayo legend Colm O’Toole, was firing the ball akin to a sniper with a rifle, which was releasing Dan Daly to go on numerous mazy runs. 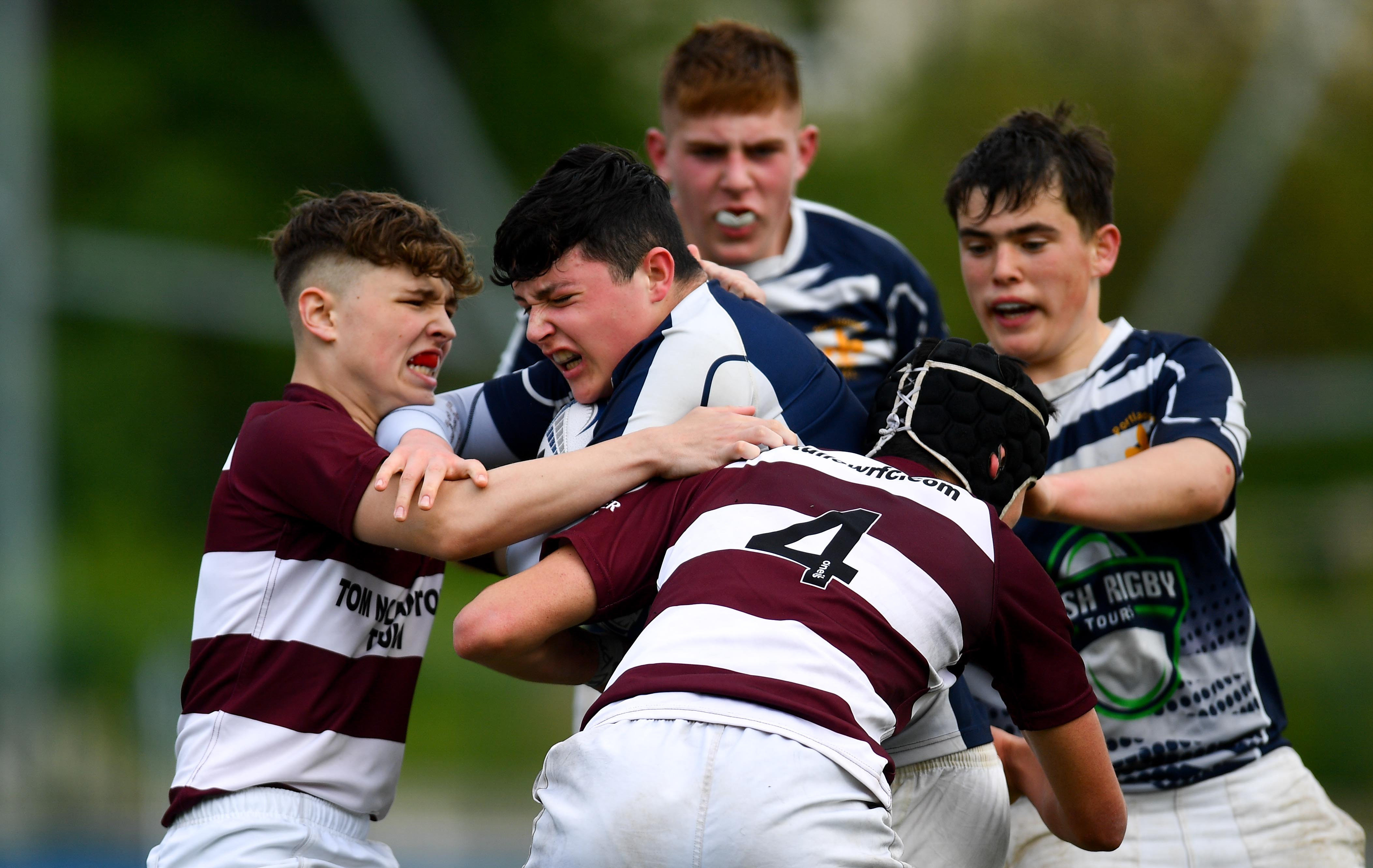 The Tullow men were at sixes and sevens and had no answer for his pace and that of Owen O’Rourke who causing havoc on the wing.

Sam Brianne was leaving Tullow men on their back sides without them landing a single finger on him such was the quickness of his side step and rocket like speed. 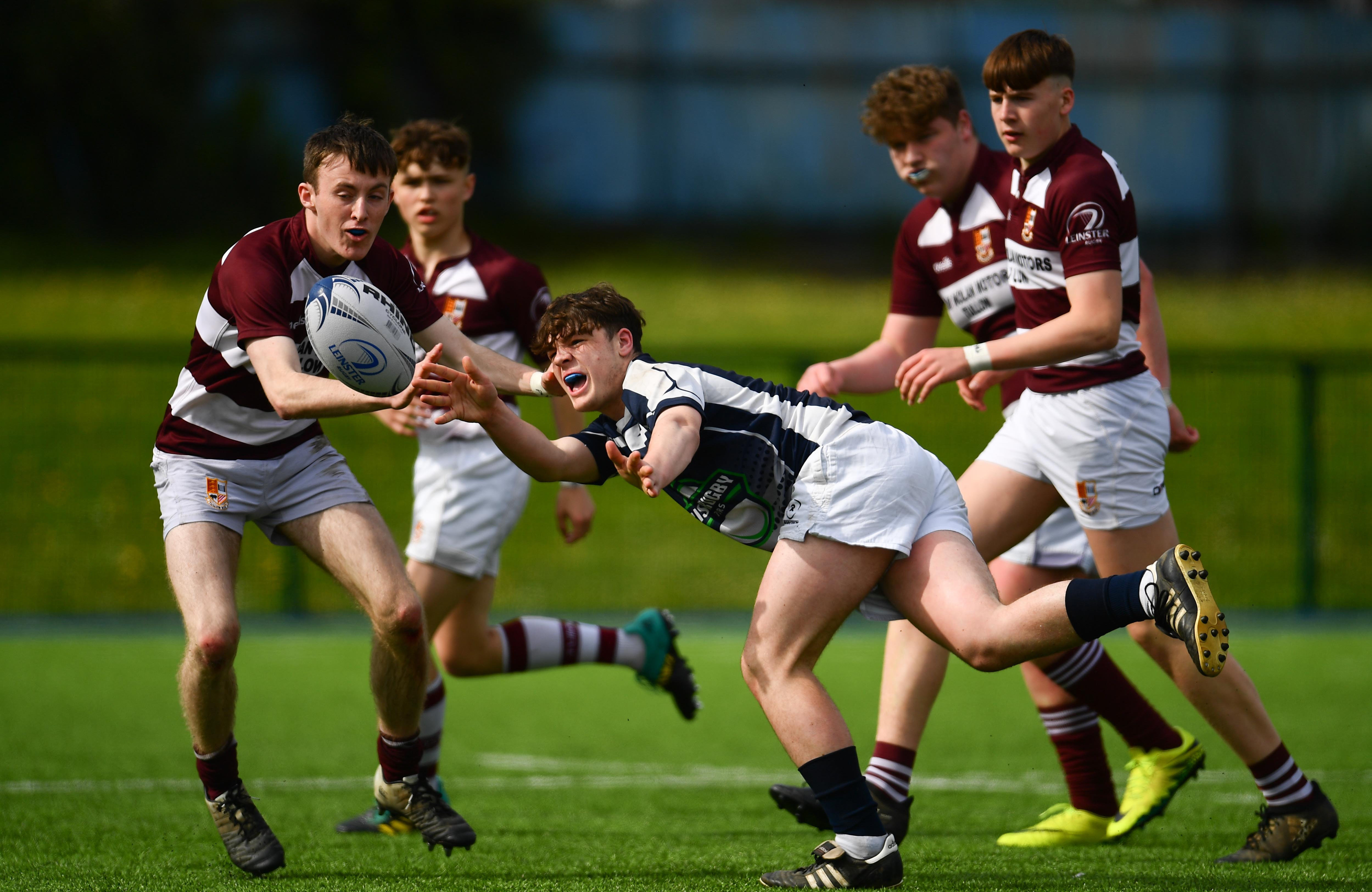 The impressive Dara Ramsbottom was throwing balls like a laser in the line out allowing Portlaoise to win all of their own. The line outs were working so well they were disrupting Tullow’s fluidity.

Tullow were looking tired now, they laboured forward with the ball. A long pass was brilliantly intercepted by Adam Hanrahan who from the half way line ran under the posts for his second try of the day. Portlaoise now had the lead 19-17. 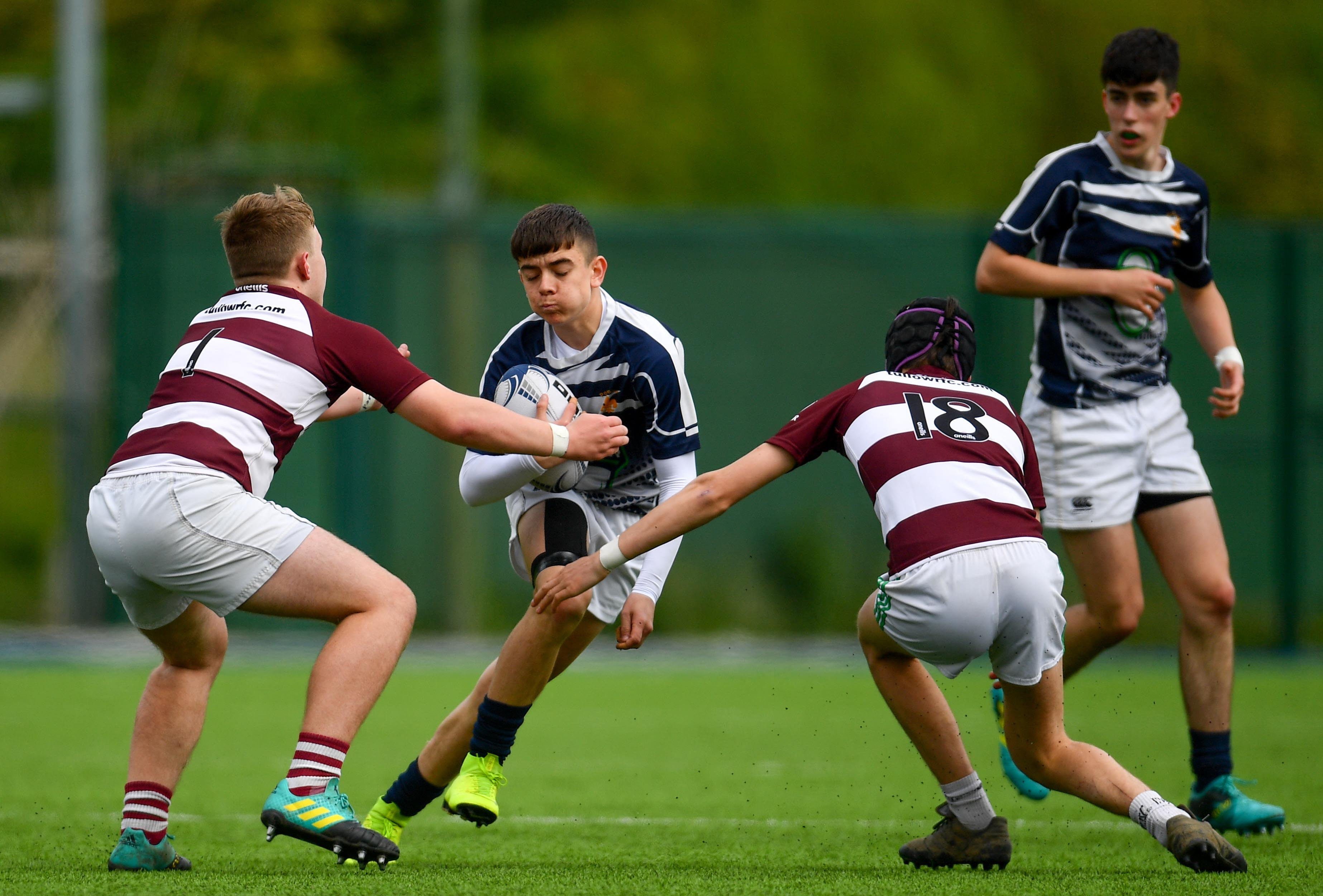 From the resulting kick off Portlaoise were back on the attack again. Another bullet pass from Joseph O’Toole sent Sam Brianne free and off he went on another winding fast paced run beating 7 Tullow men to touch down under the posts. With the resulting conversion Portlaoise now led 26-17.

The men from Tullow had it all to do now. The clock showed 10 minutes remaining. Their Forwards started to make the extra yards again.

Strong running from their backs was putting Portlaoise under pressure. Bodies were laying on the ground all over the pitch from the huge hits that were going in. Courageous defending by Portlaoise again denied a certain try just short of the line resulting in a knock on. Tullow were now finding their second wind.

Mark Kelly, son of coach Declan Kelly, came in at 9 and was quick to the break down securing possession but the men from Tullow were now desperate and throwing everything at Portlaoise. Their resistance was finally broken with two minutess left on the clock as Tullow got in for a try.

Portlaoise were still winning 26-22 and from the kick off, Tullow won possession and came on the attack desperate for the winning try but Portlaoise were having none of it. 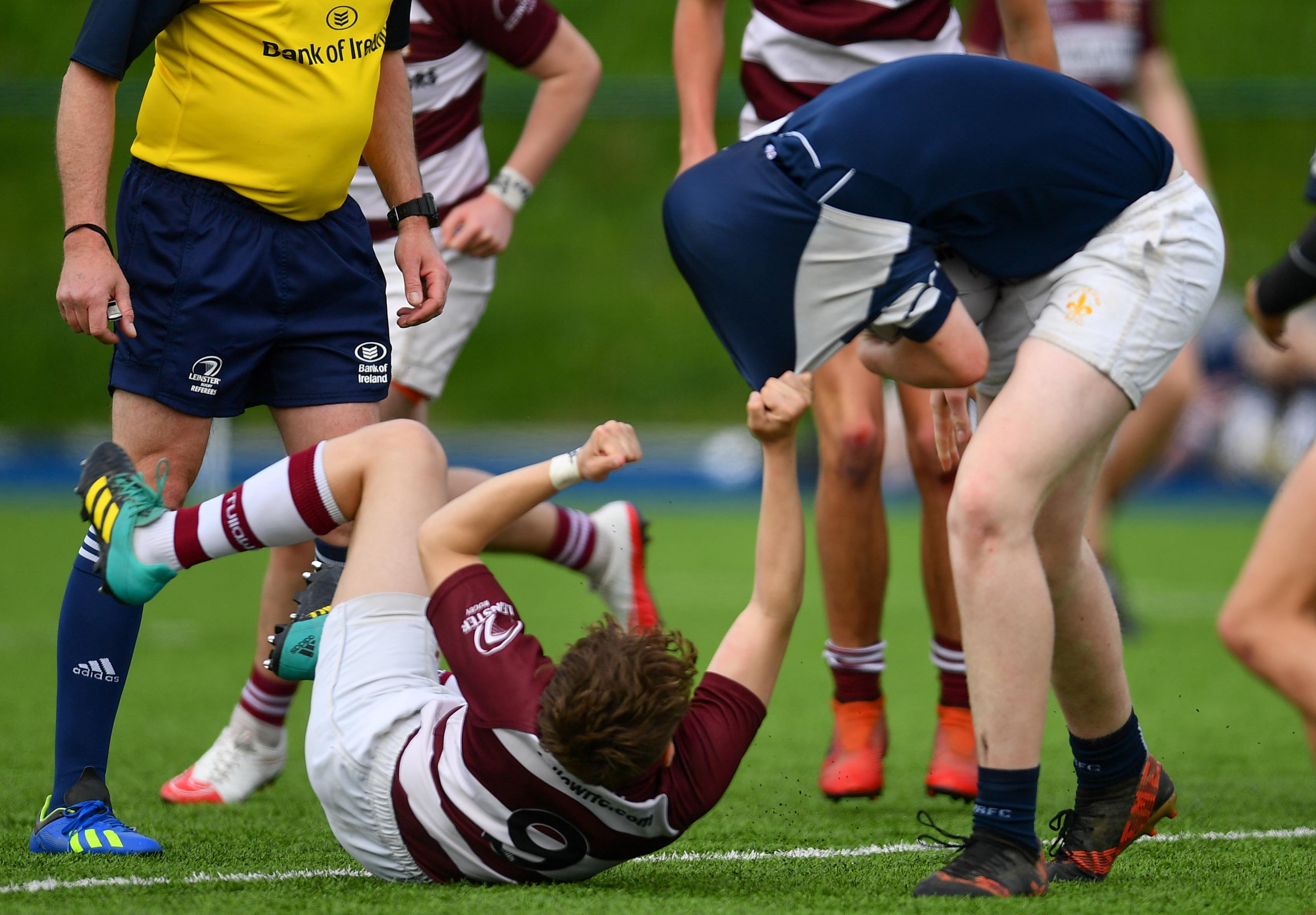 The men from Tullow were met with strong resistance from Portlaoise whose chests were now out further sensing victory was close. Portlaoise won a deserved penalty at the break down.

The ball was kicked out and triggered a mass celebration from Portlaoise and their travelling fans.

Mascots for the day were Molly Jane Dempsey and Ryan “the Portlaoise Tank” Cody.