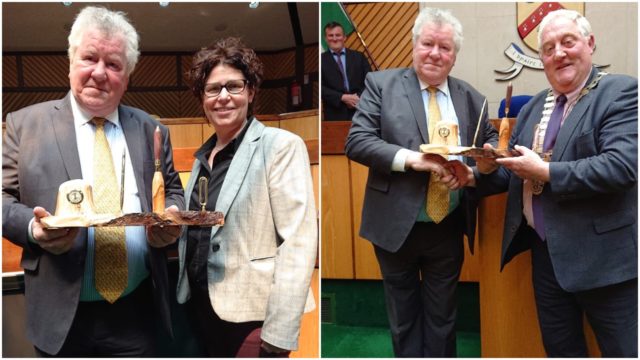 ‘All political careers end in failure,’ goes the well-worn quotation. Almost all, but certainly not John Moran’s.

The Ballylinan man attended his final Laois County Council meeting this week with a tear in his eye and a standing ovation from colleagues to send him off in style.

Very few could claim to bring the curtain down on almost 30 years in public life without falling out with anyone or having a cross word with either colleagues, opponents or officials. Cllr John Moran can.

Cllr Moran is one of a rare breed of politician who has decided to quit when he’s ahead, on his own terms and at a time of his own choosing, after first being elected to the Council in 1991 and every local election since in 1999, 2004, 2009 and 2014.

He got to serve a term as Chairman of the Council from 2007 to 2008, a role he relished and in which he excelled. There were only three days in that entire year when he did not have an official engagement to fulfil on an extremely busy schedule.

This week, councillors right across the political spectrum, and not just his Fine Gael colleagues, joined in a chorus of praise, admiration and fond recollections of John Moran’s three decades of service to his community and county.

Cllr Moran first represented the Luggacurran electoral area and more recently the new electoral district of Portarlington-Graiguecullen. While John is retiring, his daughter Aisling is contesting next week’s local elections on the FG ticket in his place.

All of Cllr Moran’s colleagues were ad idem in their praise of his remarkable career, selfless service, outstanding professionalism and his constant courtesy. They wished him a lengthy retirement, good health and contentment.

One word came ringing through in the contributions time and time again as colleagues lined up to wish John Moran well. He was always a gentleman in all his dealings not just with his colleagues but with colleagues of opposing political persuasions and local authority staff. They all concurred that he would be badly and sadly missed.

They said he leaves an incredible legacy of service to the local authority but it was also recognised the John Moran was a successful businessman operating a travel agency, was a champion of heritage projects and was renowned for his annual contribution to the Ploughing Championships in Laois.

Many of the newer councillors thanked John for his kindness and courtesy, the mentoring and advice he afforded them, like ‘a father figure’ who led by his example of a hard working ethic who served his county at home and abroad with distinction. 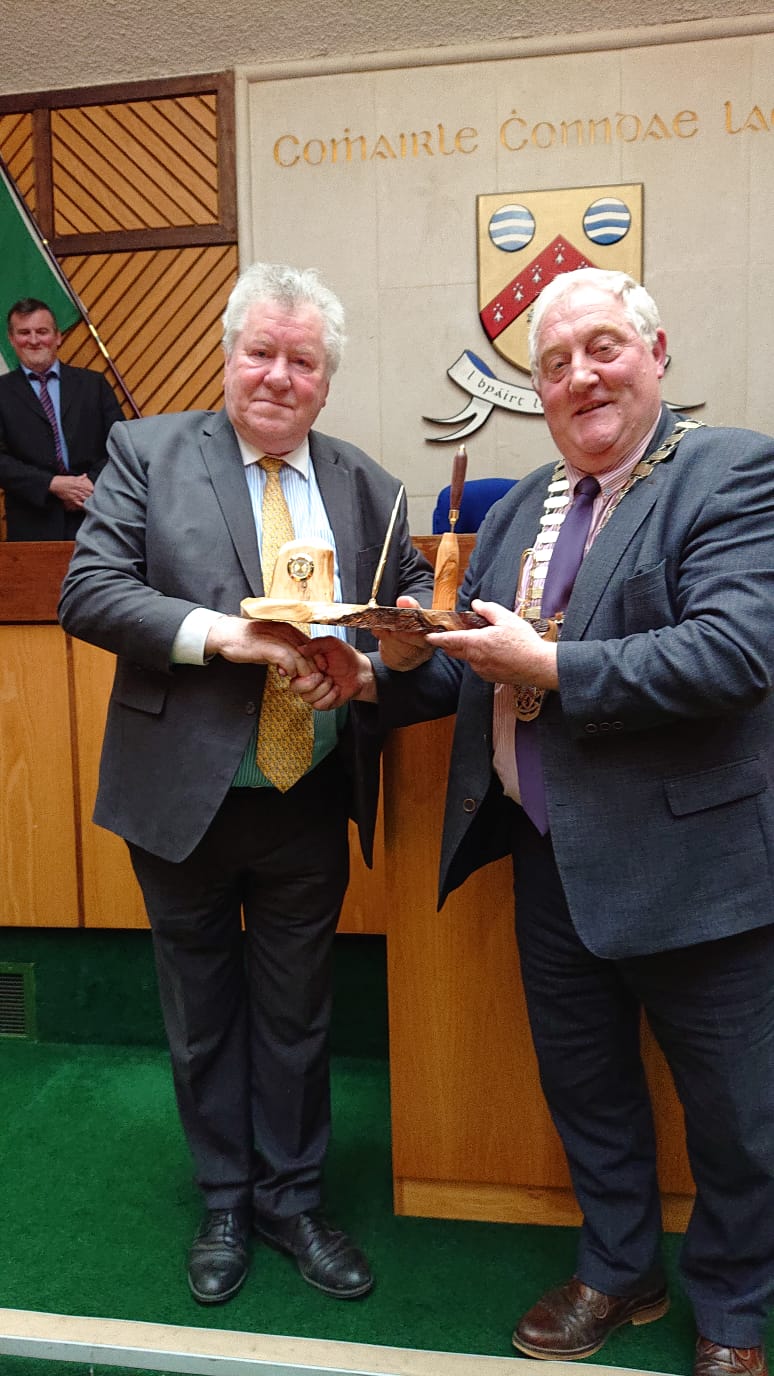 Cllr Willie Aird, who served all those years with John Moran recalled the first day he arrived in to County Hall with his wife Loretta and his beloved son Mark who was constantly by his side.

Cllr Aird raised a chuckle when he confessed that Cllr Moran was the only Fine Gael councillor that he never had a row with.

Chief Executive John Mulholland reflected that he has first met Cllr Moran back in 1994 during his first stint as an engineer in Laois County Council.

“I met Cllr Moran who had a big black head of hair back then, he still has a big head of hair; he was walking up the corridor with Ray Cribbin and Joe digan. It was like meeting the Pontypool front row, so I decided to give them a wide berth and keep going,” joked the local authority’s most senior official.

He went on to recall how while visiting New York with John in 2016 that Cllr Moran held his own in distinguished company, always with humility, a genial gentleman with unfailing courtesy representing his county, community and family with huge honour and distinction. 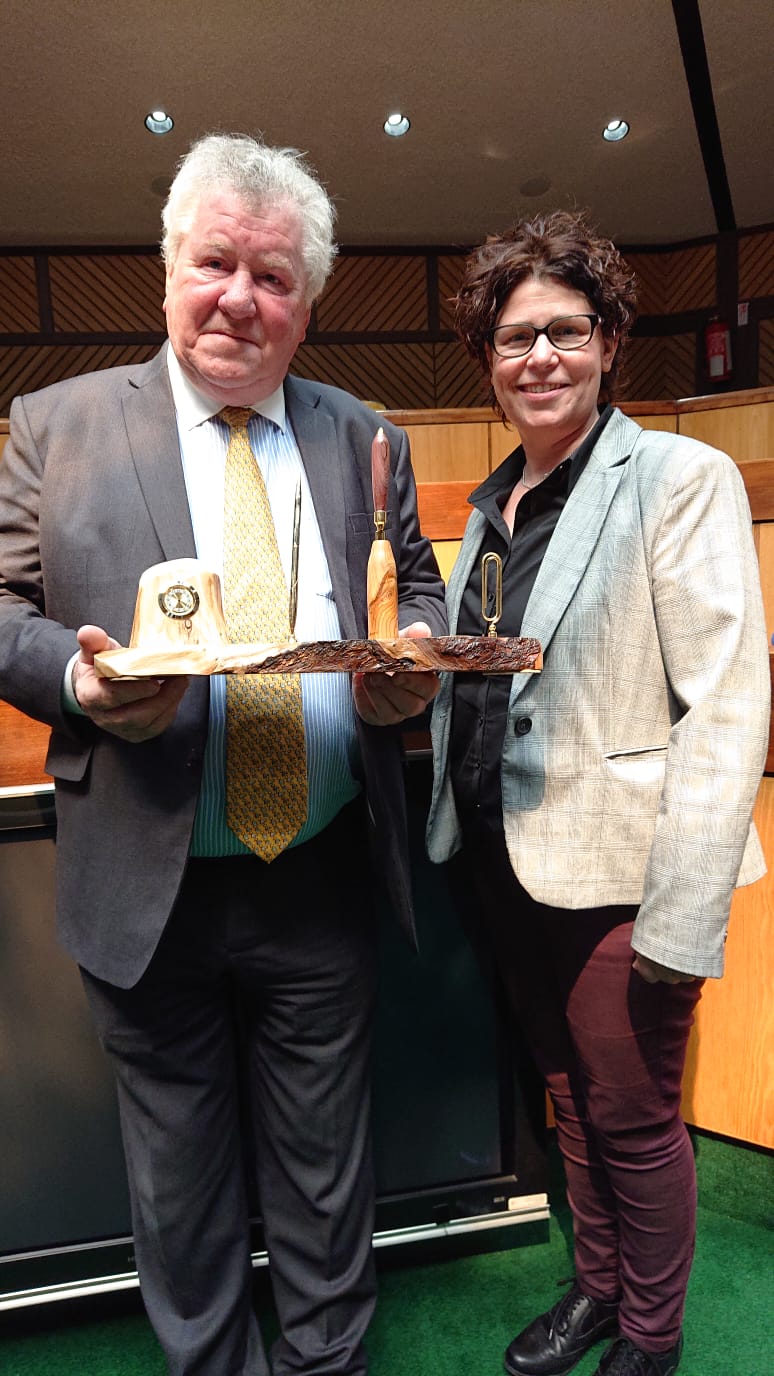 “I’m devastated. I never thought it would be so hard to say goodbye. I really enjoyed my time here as a councillor. It’s been a great honour. I really like every single one of you. We have never had an argument or a falling out,” replied Cllr Moran, wiping away the tears in what was clearly an emotional farewell, as he in turn paid tribute to Liam Hyland, for he had helped him when he was starting out all of 28 years ago at a meeting at the creamery in Killeen.

His colleagues also wished his daughter Aisling good luck and success in the forthcoming elections before the Chairman, John King made a presentation of a gift which had been made by the Rathdowney’s Men’s’ Shed.