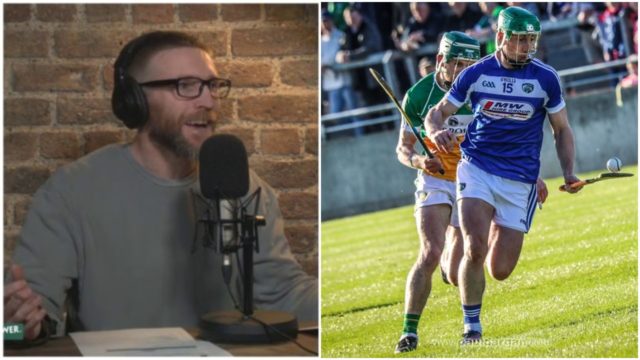 Laois, Offaly, Antrim and Kerry played in the first round of the Joe McDonagh Cup at the weekend but if you had watched the Sunday Game – you would not have known any of these games had taken place.

There were seven goals and 50 scores in the Laois win over Offaly on Saturday night but aside from the result flicking along the bottom of the screen as the hurling part of the show concluded, there was not a mention of the game.

No highlights, no discussion – nothing.

This was just Laois’s second championship win over Offaly in more than 40 years and the game itself was a tremendous encounter – incredible value for the €10 entrance fee.

The lack of promotion of the Joe McDonagh Cup by the GAA and RTE is something which has irked pundit Colm Parkinson and taking to the GAA Hour, the Portlaoise native blasted both the Association and the state broadcaster.

He said: “For Laois people, to go to Tullamore and beat Offaly in the championship is a massive result but what I’m disappointed with is that there was no recognition of this result at all.

“I’m really pissed off about this because I am from Laois and this was a great result. I couldn’t get to the game and I saw not a dickybird of it anywhere. They didn’t even read out the result on the RTE News on Saturday night.

“Then on the Sunday Game, inexplicably, they didn’t even mention it. Now for me to understand it, Laois are around the 11th (best) county in the country and Offaly are 12th.

“This is the Tier 2 competition. You can say anything below the Joe McDonagh Cup is football counties playing hurling but Antrim, Offaly and Laois are hurling counties. This is not bullshit, these are hurling counties that are in a Tier 2 and are trying to get back into the Leinster championship and they are giving it no highlights at all?

“How are the GAA standing for RTE completing disregarding a Tier 2 competition?

“We talked here before about TG4 getting the rights to the Joe McDonagh and maybe that is the way.

“This would not be stood for in the football community. On the Sunday Game, all of the games involving Division 4 teams like Waterford, Wicklow and Limerick were shown.

“I said to Tom Ryan (Director General of GAA) when he was in here, ‘why don’t you sell the rights to the Joe McDonagh Cup separately’ and he said ‘oh that’s a great idea’.

“Can you believe that? Laois, Offaly and Antrim are traditional hurling counties.

“Laois have won a hurling All-Ireland but never a football. They are as much a hurling county as they are football but they are being treated like dirt.

“RTE is to blame, the GAA is to blame but the hurling community are also to blame for allowing this to be accepted.

“You are a traditional hurling county and you have just had a famous victory but it has been completely brushed aside. It is just so infuriating.”

Former Offaly hurler Brian Carroll appeared on the panel also and he said that ‘the GAA are washing their hands of the Joe McDonagh Cup’.

Check out the full discussion below: