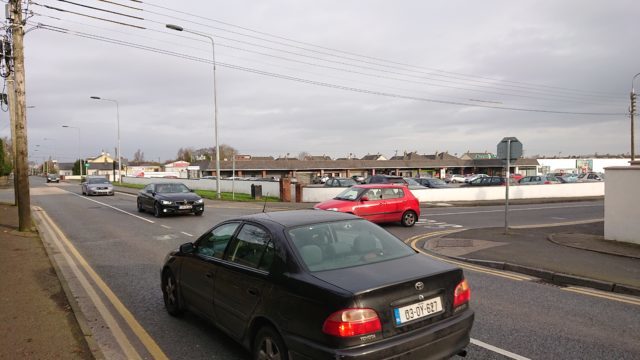 Portlaoise is a town filled with roundabouts. Yet there will not be a roundabout put in place at the second entrance to Newpark opposite the Dunne Stores entrance on the Mountmellick road.

Councillors at the latest sitting of the Portlaoise Municipal District discussed their outrage over the decision by Transport Infrastructure Ireland (TII), in this long-running saga.

Two councillors raised this issue. Willie Aird asked about installing a roundabout at Newpark, while cllr Noel higlighted the exit from Harpurs Lane and the Ballyfin road.

“People are prisoners inside of Newpark,” exclaimed cllr Aird, who spoke of long queues of cars trying to leave the estate to head to work or school.

“There’s been nine cars in row of people waiting to get out. This is not right,” said the Portlaoise cllr.

As one of the busiest roads heading into the town, cllr Aird said: “The yellow box is grand but is not able to cope with the traffic there. We have got to take control of the urban centres in our own town.”

What particularly greived councillors is the fact that the TII did not state why the construction of roundabouts was not approved.

“The TII – who are these people What are they proposing to do. It’s very embarrassing for us as democratically elected politicans,” said cllr Aird.

“It should be there in black and white as to why it has not been approved,” added cllr John Joe Fennelly.

Cllr Caroline Dwane Stanley said that she hopes there would have been three roundabouts approved for the road, while cllr Aird said he wanted two but would be happy to settle for, ‘at least one’.

Cllr Catherine Fitzgerald maintained that the blame for this decision should not just rest with TII, but also with Laois County Council.

The Cathaoirleach of the Portlaoise Municipal District believes that the council should have made it a condition when Dunnes was upgraded.

“We failed – we did not put it in as a condition. We’re now going around chasing it. I’d say there is the highest number of accidents in the town on Green Mill Lane,” said cllr Fitzgerald.

She asked that whoever is sitting on the newly elected Portlaoise Municipal District meet with Dunnes Stores to discuss putting a roundabout there.

“Mountmellick road has been left behind. It shouldn’t be a job to get out of your work,” added cllr Noel Tuohy.

SEE ALSO – Concerns over the future of Portlaoise Mail Centre