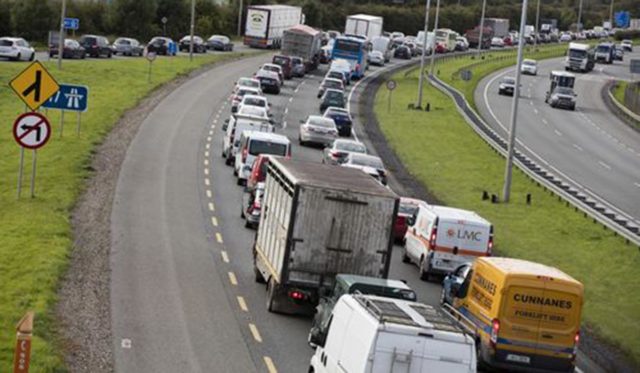 This will be certainly be welcome news for the thousands of Laois commuters who make the daily trip to work between here and Dublin each day.

Kildare County Council has confirmed that from tomorrow morning, Monday June 17, three lanes will be in full operation on part of the M7 motorway.

The area between Junction 10 (Naas South) and Junction 8 (Johnstown) will now have three lanes open – although the 60kph speed limit will remain in place.

This speed limit is set to stay at that level for one week before increasing to 80kph.

Kildare County Council said: “The contractor, SIAC Colas JV, has informed Kildare County Council that, subject to favourable weather conditions and completion of all necessary activities, 3 lanes will be available to traffic on the M7/N7 Eastbound carriageway from Junction 10 (Naas South) through to Junction 8 (Johnstown), from Monday 17 June 2019.

“Motorists are advised that the reduced temporary speed limit of 60kph will remain in place while works are ongoing at locations on the verge/hard shoulder area.

“It is anticipated that, on week commencing the 24 June 2019, 3 lanes will be available Westbound from Junction 8 (Johnstown), to Junction 10 (Naas South).

“At that time the temporary speed limit will be increased on both the Eastbound and Westbound carriageways to 80kph between Junction 8 (Johnstown), to Junction 10 (Naas South).

“Lane restrictions and the 60kph temporary speed limit will remain in place in both directions between Junction 10 (Naas South) and Junction 11 (M7/M9 merge) until further notice.”

Back in April, it was revealed that the project to create three lanes on the M7 from just outside Newbridge would miss their intended competition date.

Local Labour councillor Mark Wall confirmed to Independent.ie that the project’s estimated completion date has been pushed back to the end of July.

The project will see the a 14km stretch of the M7 widened from Naas to the M9, along with the bypass of Sallins and a new interchange at Osberstown, in Kildare.

SEE ALSO – Laois Hurling Memories: All Ireland ‘B’ glory in 2002 brings curtain down on eventful year