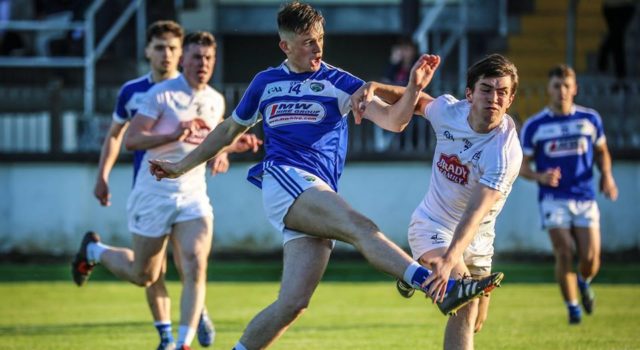 The Laois U-20 footballers take on All-Ireland champions Kildare in Round 1 of the Leinster championship this evening.

The game throws in at 7.30pm in St Conleth’s Park, Newbridge.

Like last year in the case of Finbarr Crowley, the rule prohibiting those who play senior from playing U-20 has struck Laois again as Courtwood’s Sean O’Flynn and O’Dempsey’s Mark Barry are unavailable for this game.

What happened when the sides met last year?

These two clashed in Round 1 of the Leinster championship last year – Kildare’s first win on the road to their All-Ireland success against Mayo.

Four Laois goals had them eight points up with 20 minutes to play but Kildare came back to break Laois hearts – with Brian McLoughlin firing six points in that period.

They clawed back the deficit and ended up winning 1-17 to 4-6. Laois subsequently defeated Wicklow but lost to Meath in their final game as their campaign ended.

What happened when these sides clashed at minor level in 2017?

Laois and Kildare met in the Leinster minor quarter final in 2017 and the Lillywhites once again came out on top in Newbridge.

Like in the U-20 game last year, Laois built up a big lead early on in the game but a scoreless period ultimately cost Noel Delaney’s side.

Laois led by seven points with fifteen minutes on the clock but failed to score again until the 43rd minute and it was this which cost them dearly in the end.

If Laois win, they will face either Westmeath away on July 2 in the Leinster quarter final.

If they lose, they are out.