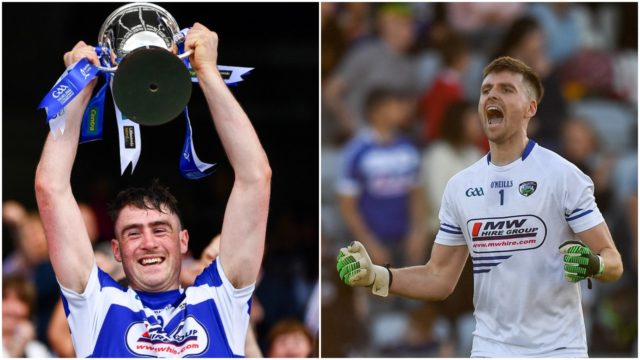 After the excitement of the past few days, Laois GAA fans will have to do it all over again this weekend as the GAA have confirmed fixture details for both the senior hurlers and footballers.

The Laois footballers will take on Cork in Semple Stadium Thurles at 5pm and it is the only Round 4 Qualifier game that will not be televised.

Sky Sports will show Cavan v Tyrone at 5pm and Galway v Mayo at 7pm on Saturday while Clare v Meath will take place in O’Moore Park on Sunday at 2pm and RTE will show that game.

The Laois hurlers will take on Dublin at 4.15pm directly after that game in O’Moore Park on Sunday.

While the other hurling Qualifier sees Westmeath host Cork at 3pm in Mullingar on Sunday.

After defeat to Meath in the Leinster semi final last month, the Laois footballers recovered to record a thrilling win away to Derry in Round 2 to book their place in Round 3 of the All Ireland Qualifiers.

In front of a packed stand in the Derry Centre of Excellence, John Sugrue’s side eked out a 1-13 to 0-12 win to progress.

Laois squandered a litany of goal chances in the second half and when Derry struck the front in the final ten minutes, it looked like the game was getting away from Laois.

But up stepped substitute Eoin Lowry and he found that killer touch that saw Laois advance to the next round.

Then it was on to neighbours Offaly where the Kingston brothers, Donie and Paul, produced their best football of the season to kick ten points between them.

The sides were level at the break, but Laois turned on the style on the resumption of play to win 0-20 to 0-15 in the end and progress to Round 4.

The winners of this first ever championship game between Laois and Cork will advance to the Super 8s where they will join Dublin, Roscommon and the winners of Cavan and Tyrone.

The hurlers gained entry to the All-Ireland series after reaching the Joe McDonagh final three weeks ago following their win over Kerry.

And their Preliminary All-Ireland Qualifier with Dublin was confirmed yesterday when they defeated Westmeath in the final.

If Laois defeat Dublin, they will advance to an All-Ireland quarter final against Tipperary.