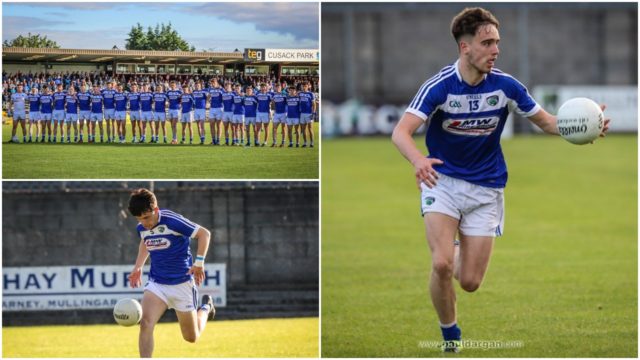 The Laois U-20 footballers are through to their first Leinster final in ten years as they easily swept aside the challenge of Meath in O’Moore Park this evening.

Billy O’Loughlin’s charges led from the off against the Royals and proved far too strong in the end to set up a tie with Dublin on July 19.

The last time Laois contested a final at this grade, back when it was U-21, was against a Dublin team managed by Jim Gavin in 2009.

Laois would get one goal in the first half but they almost had it after 30 seconds when Ronan Coffey split the Meath defence apart only to see his shot just go over the bar.

It was the catalyst for what was to come really as Laois would hold Meath scoreless throughout the opening period from play and end it with an eight-point lead.

And then Laois did get that goal. Eoin Dunne won a Meath kick-out and fed Ronan Coffey who delivered a long ball to big Dan McCormack and he showed soft hands to lay a goal on a plate for Kinsella.

This gave Laois a real lift and they fired over the next four points through Mark Barry, Whelan, Colin Slevin and Dan McCormack to build up a fine lead.

Meath did have one goal chance in that time when Daithi McGowen floated in an inviting high ball which Cian McBride got a hand to but Laois keeper Matthew Byron pulled off a fine save and Sean O’Flynn cleared the danger away.

Daithi McGowen added a third free but Laois finished the half as they started it with a Ronan Coffey point to take a 1-8 to 0-3 lead at half time.

Laois extended their lead to nine on the resumption of play through Michael Doran but Meath, who made three changes at half time, responded with their first score from play in the match via Jordan Morris.

Meath then had a big goal chance when Jordan Morris caught a ball out of the clouds and popped it off to Cathal Finnegan who was in one-on-one with Matthew Byron but he pulled off a stunning save.

And Laois capitalized on that fine piece of goalkeeping as Mark Barry swung over a free and then sub Jack Owens drove one over to move them 1-11 to 0-4 ahead with 15 minutes to play.

Aaron Lynch grabbed his first but Barry was finding his range now and he restored Laois’s ten-point lead with 50 minutes on the clock with his right foot.

The game was then held up then for around five minutes when Ronan Coffey and Meath’s Matthew Costello collided, resulting in both players going off injured, before Mark Barry kicked Laois further ahead as we entered injury time.

Aaron Lynch was the only scorer in six minutes of injury time as Laois prevailed.