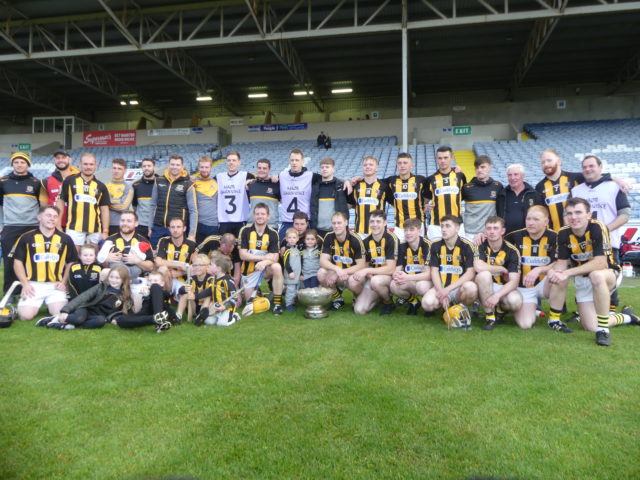 Camross produced a hugely impressive second-half performance to turn around a seven-point half-time deficit to claim their third Division 1 league title in a row and their 17th overall.

They trailed 1-10 to 0-6 at the break to Clough-Ballacolla this evening in O’Moore Park but a host of changes and a much-improved performance and attitude saw them record an impressive win and lay down a serious marker ahead of the start of the championship later this month.

With the Laois hurlers in the All Ireland quarter-final on Saturday, neither side were able to call on their county contingent. It left Clough-Ballacolla without their four representatives and Camross without six.

The county champions of the last two years also had to do without top forward Zane Keenan who suffered a serious injury in a recent league game and is set to be sidelined for the year.

Clough-Ballacolla coped better with the losses in the opening half, and after they took the lead in the 15th minute, they were in control from there to half time.

Three Niall Holmes frees and one long-range effort from play from Darrell Dooley against four Jordan Walshe frees had the sides level 0-4 apiece at the end of the opening quarter.

Walshe was the game’s most impressive performer in the opening half and he got a fine score from play as well as three more frees and Willie Hyland added one to have Ballacolla 0-8 to 0-4 up after 20 minutes.

Liam Delaney and Mattie Collier pulled scores back for Camross but they were cancelled out by Walshe (free) and Hyland before Ballacolla struck for the game’s first goal.

A nice flick from Walshe put Hyland through on goals but he passed across the square to Mark Hennessy who batted to the net from close range. It left Ballacolla leading 1-10 to 0-6 at the break.

Camross changed things around considerably at the break. Eoin Dowling had been introduced before half time, Dwane Palmer was brought back to the full-back line and Tomas Burke came in full-forward.

The changes made a world of difference. Palmer was outstanding in defence, Gearoid Burke landed a couple of long-range frees, Matthew Collier, Dean Delaney, Craig Carroll, Ciaran Collier and Tomas Burke all pointed from play while Niall Holmes was a bundle of energy as always and unerring from frees.

With the game turning against Ballacolla things took a turn for the worst when Mick McEvoy got a straight red card for a pull on Andrew Collier. This came moments after Darren Maher had been yellow-carded for a clash with Liam Delaney.

Willie Hyland hit a couple of quality scores from play to keep Ballacolla in it but despite the best efforts of Maher at full-back Aidan Corby in midfield and Danny Hanlon in goals, their fade-out was alarming.

Camross outscored Ballacolla by 0-13 to 0-4 in the second half. And with a third league title in a row secured they’ll now turn their attentions to winning a third championship on the trot.

As ever, they’re the team to beat.