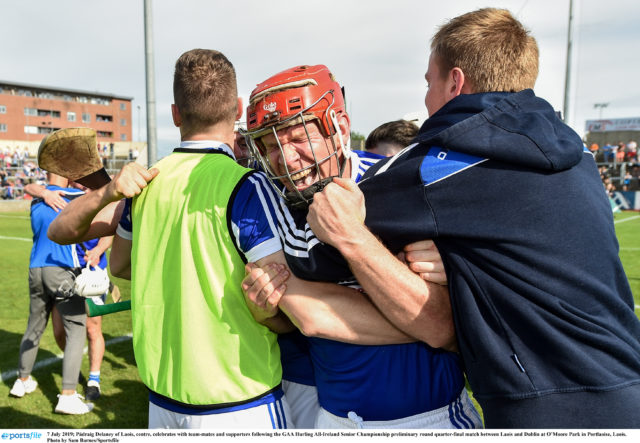 There has never been such interest in the Laois hurlers.

The Joe McDonagh Cup final win of two weeks ago really captured the imagination while last week’s thrilling win over Dublin was raucously celebrated and will be cherished for years to come.

This Sunday, Laois take their place alongside the aristocrats of the game – a quarter-final clash against Tipperary is the second part of a double header, following the earlier meeting between Cork and Kilkenny.

There’s been a rush on tickets, the trains are sold out and there’s an endless stream of good luck messages, signs and songs from around the county.

But with a run like this comes bandwagon supporters. And that’s great. There’s nothing more positive.

We’re here to help those supporters, many of whom might not know Willie Dunphy from Aaron Dunphy, perhaps call a ’65 a ’45 and whose hurling knowledge both inside and outside Laois is sketchy at best.

There are few handy stock phrases to have in your repertoire:

But to really impress, we’ve put together this additional guide. Learn it off and you’ll be sounding like a cross between Cyril Farrell and Ger Loughnan.

Laois has only eight senior teams – although the next grade is called ‘Senior A’ and also has eight teams. Tipperary has 32, it used to have more and there are 12 alone in North Tipp.

Laois also reached the All Ireland hurling final in 1916 but their only other Leinster title was won in 1949. Captain of that team was a man called Paddy Ruschitzko, who was born in New York to a Polish father and Irish mother and moved back to Ireland at a young age following the death of his father. They moved to Mountmellick but Paddy played with the great Clonad team of the time.

Mixing with the big guns in the 1980s

Other big days for Laois hurlers over the years were an appearance in the one-off centenary final in 1984 when Laois lost to Cork and a Leinster final appearance in 1985. That 1985 season saw Pat Critchley win Laois’s only ever hurling All Star.

While Laois have been omitted from the Leinster championship for the last two years following their demotion to the Joe McDonagh Cup, something similar happened in the 1970s when Laois played in the All Ireland ‘B’ competition. Laois won it in 1977 and 1979 and ran Galway incredibly close in the All Ireland quarter-final in 1979 in Birr. Galway won the All Ireland the following year for the first time in 57 years.

Some nuggets on the players

Goalkeeper Enda Rowland from Abbeyleix has scored 52 points in 52 games for Laois. He played minor for the county for four years.

Full-back Matthew Whelan from Borris-Kilcotton is Laois’s longest-serving player. He played minor football with Laois in 2005 and 2006 and later played senior with Mountmellick.

Ryan Mullaney from Castletown is another lad who played football for Mountmellick. His brother Paddy is a former Laois goalkeeper and captain.

Paudge Delaney from The Harps is the youngest player on the team and is only 20 this year. From Cullohill, he played minor hurling and football with Laois.

Midfielder Paddy Purcell is the team captain. He’s from Errill, plays with Rathdowney-Errill and has pace to burn. Made a great speech after the Joe McDonagh final in Croke Park. He had a particularly good year in 2017, when he scored five championship goals, including three against Meath and one against Wexford.

Wing-forward Aaron Dunphy from Borris-Kilcotton, who scored 1-4 against Westmeath in the Joe McDonagh final and 1-2 against Dublin, is a twin. His brother Stephen has also played for the Laois seniors in recent years and both were on the Borris-Kilcotton team that won their first championship in 2016 when he was still a minor.

Willie Dunphy is the next oldest on the team after Matthew Whelan. He was man of the match against Dublin with four points from play. Has three county championship medals with Clough-Ballacolla.

Cha Dwyer from Ballinakill is a class hurler who has been marked out as one to make the big time from a young age. Along with current Laois team-mates Enda Rowland and Stephen ‘Picky’ Maher as well as Dwane Palmer from Camross, he helped IT Carlow to reach an historic first Fitzgibbon Cup final in 2017. DJ Carey was their manager.

The Laois hurlers take on Tipperary in Croke Park this Sunday, July 14, at 4pm. The game is live on RTE. Here is what you need to know about getting a ticket.