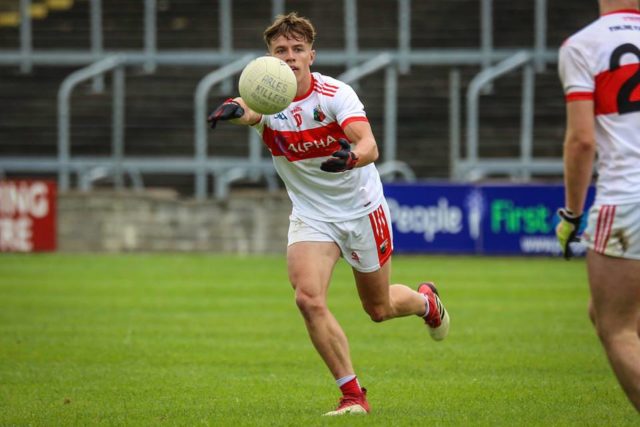 Emo have avoided a relegation semi-final after toppling Stradbally by six points in O’Moore Park this evening.

Two second half goals from Nigel Murphy and Darren Strong put the nails in the 14-man Little Town’s coffin as they are now sent down to the final four on the bottom end of the table.

The first half could be generously deemed a ‘slow burner’, with only seven points being registered between the sides in the opening 20 minutes.

The seasoned Paul Lawlor opened the scoring account for the day, a 21 yard free proving easy pickings for the player/manager.

Jack Deegan made some headway for The Little Town with a point after five minutes to draw the sides level.

A back-and-forth of sorts ensued, with Nigel Murphy and Tom Shiel trading scores, with placed balls from Shiel accounting for three of Stradbally’s five points in the opening 30 minutes.

A foul on Jody Dillon resulted in a 14 metre free for Shiel, which he lobbed over with ease, sending Stradbally ahead for the first time.

It took Emo 14 minutes to re-establish their lead. As the ever-influential Colm Begley launched forward to curl over Stradbally’s fifth of the evening, a gap opened in the Stradbally defence.

Quick-thinking by the Emo men saw a high ball lobbed into Lawlor on the edge of the square, where he was brought down by Eamon Conlon inside the box.

Conlon was sent to the line on a black card and Lawlor teed up for the penalty. Wayne Comerford’s soccer experience certainly came into play as he kept out the ball going into the top right-hand side to deny Emo a goal. Lawlor would have to make do with his rebound sailing over the black spot to raise a white flag for now.

But the number 14 wouldn’t have to wait too long to smash the back of the net. He and Murphy cut through the now two-man full-back line and as Murphy laid it off, Lawlor eventually found the net.

Following up on this, Jack Owens hauled over Emo’s sixth point of the half, leaving it 1-6 to Stradbally’s five points as Brendan McCann blew his whistle for half time.

However that was not the end of events on the field. A foul on Emo’s Brian Gorman by Brendan Lawlor saw the half-back hit the ground, and Lawlor received a straight red once he emerged back onto the field for the second half.

Stradbally began to show their mettle in the opening minutes of the second half. Jody Dillon, overseeing Stradbally’s long-range frees, notched over his effort from 45 metres out to bring it back to three between the sides.

Jack Owens, now wearing number 29, brought it back to four between the teams, but Stradbally’s Jack Deegan began to stride for goal, he was brought down in the square and the second penalty of the game was granted.

Jody Dillon stepped up and dispatched the penalty neatly into the net, bringing it back to one between the sides.

Lawlor managed to double his side’s lead from a free following the next kickout, before four different players accounted for the next four scores.

Evan Costello and Murphy added to Emo’s tally, while Tom Shiel and Eoin Buggie converted for Stradbally to make it Emo 1-11 to Stradbally’s 1-9 after 48 minutes.

Tom Shiel exhausted himself to close this gap to a single point, but Emo got themselves in gear from here on out to leave Stradbally in the dust.

A high ball into the Emo full-forward line proved fruitful, with Nigel Murphy coming on the end of it to smash the back of Comerford’s goal after 52 minutes.

Darren Strong followed up by raising the green flag just 40 seconds later, and while Tom Shiel kept Stradbally in the game with a handful of his scores, the result looked unceasingly in Emo’s favour.