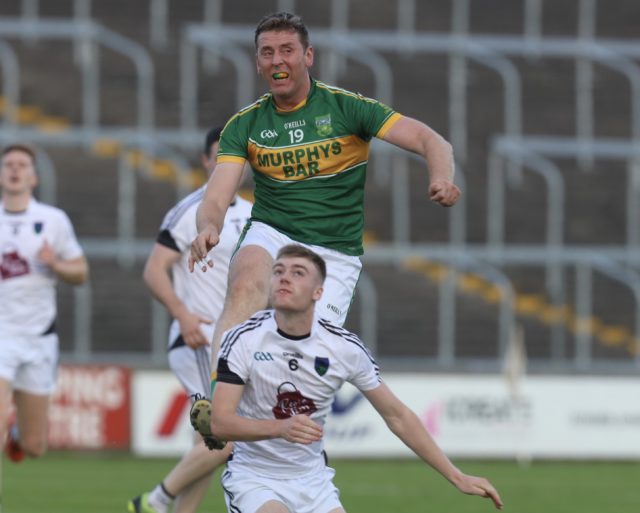 Gary Walsh hit 11 points just days after returning from a summer playing football in America as Ballylinan recovered from a dreadful first half to see off last year’s intermediate champions Courtwood in an entertaining affair in O’Moore Park this evening.

Ballylinan were eight points down at one stage in the first half and five down at half time – but Walsh really turned on the style after the break and a goal from Oisin Leonard was crucial as they got their noses in front and then held on in a hectic finish.

Eddie Kinsella’s Coutwood side raced into a 1-6 to 0-1 lead, the goal coming from county man Sean O’Flynn while Niall Dunne was excellent in the opening half, scoring five points, two of them from play and one from a sweetly-struck ’45.

Niall Donoher and Alan Kinsella got Courtwood’s other first-half points as they led 1-7 to 0-5 at the break, Ballylinan keeping in touch with four points from Walsh and one from centre-back Richie Ryan.

But Ballylinan were beginning to get going and Ciaran Farrell – who had his suspension lifted during the week following a straight red card against Arles-Kilcruise – set up Oisin Leonard for a goal to bring it back to one.

Courtwood replied through Niall Dunne but Ballylinan hit the next three points – two from Walsh and one from Farrell to go into the lead for the first time in the 49th minute.

Another Dunne free tied things up but again Ballylinan scored the next three, Walsh getting all three of them, one from play and two from frees that he was fouled himself for.

With two minutes remaining Ballylinan led by three. But Courtwood weren’t go to go quietly and sub David Duffy brilliantly flicked to the net to level it.

Walsh instantly put Ballylinan back in front but Alan Kinsella levelled it again when he took a pass from sub Paddy Wilson.

But Walsh was far from Dunne and he swung over the winner in injury time.

Courtwood attacked frantically in search of an equaliser and few would have begrudged them a draw. But Mark O’Halloran and Conor Hogan saw efforts go astray and Michael Tarpey’s full-time whistle was greeted joyously by Ballylinan.

They go through the quarter-finals in three weeks time. Courtwood’s hugely promising first season back in senior is at an end.