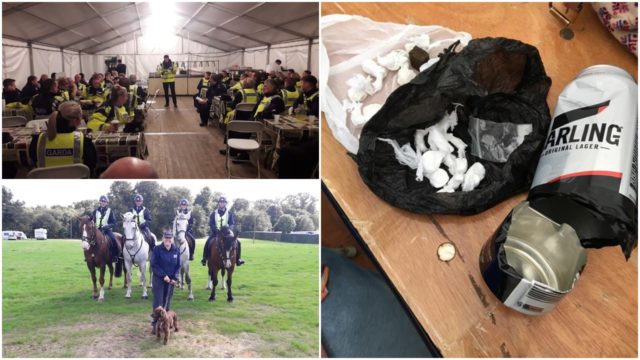 Gardai operating at the Electric Picnic have made one final plea for punters not to take drugs on the final day of the festival.

By early yesterday, Gardai had made over 200 drug seizures and in all likelihood, that figure will have well increased over the course of the remainder of the day and last night.

They are pleading with people not to engage in drug taking on the last day.

They say: “So far Gardaí have made over 200 seizures of drugs at event. A number of people have been arrested and detained for the sale and supply of drugs at the event. We are ensuring the safety of all that attend.

“Cocaine, Ketamine, MDMA powder and tablets along with cannabis are being seized. If you are attending the event and become aware of persons supplying drugs bring it to the attention of Gardaí on site or contact confidential number 0578625019.

We need to get this message out there. Social media commentary would leave us all to believe that drugs are harmless and Gardaí and right minded people do not have any idea regarding drugs.

“Those individuals that say such things have never lost a loved one, seen a son, daughter, father or mother, brother or sister die from drug abuse or overdose. Nor have they had to break the news to a parent or family.

“If you have someone attending the Electric Picnic this weekend share the message with them and remember we might not catch everyone but when we do catch people we potentially have saved their and their friends lives.

“An Garda Siochana are warning festival-goers attending #ElectricPicnic there will be a high-visibility police operation at the event, targeting the use and supply of illegal drugs. We will be there to uphold the law.

“Those who bring illegal drugs into the festival can expect to be caught and dealt with accordingly.

“Prohibited drugs are illegal and potentially life-threatening, especially when combined with alcohol, so we urge everyone to behave responsibly.

“We will be there to uphold the law and ensure the safety of all festival-goers.

“If you are attending any events or music festivals remember the following. Many illicit drug users may think that the only bad thing about doing drugs is that they are illegal.

“The truth is there are negative health effects associated with every illegal drug out there and some of them can be fatal. Don’t consume illegal drugs. You’re need for a high can leave a family devastated.”

SEE ALSO – Dear Electric Picnic Acts – You are not in Dublin!