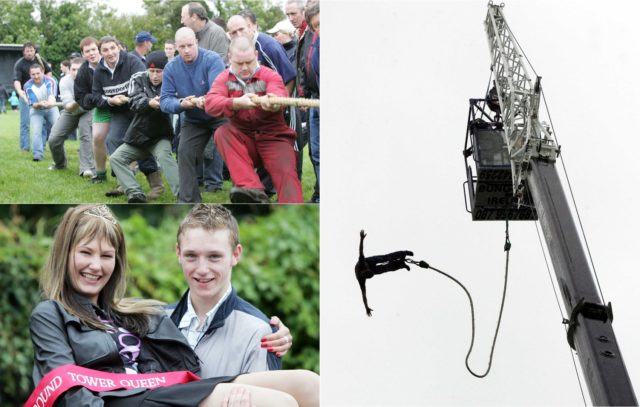 Our Moment In Time this week looks back on the Timahoe Festival at the Round Tower in 2004.

In its third year, the annual festival brought torrential rain but that didn’t stop crowds flocking to Timahoe to watch as 45 brave individuals bungee jumped from a 180 foot crane.

The crane, brought in from Monaghan, was first put in the football pitch but it quickly began to sink into the soaked ground.

Billy McDonald came to the rescue with his four wheel drive tractor and moved the 70 tonne crane to the tennis court opposite the Community Hall.

The bungee jumping commenced with Willie Ramsbottom up first. Last to jump were footballers Brendan Quigley and Eoin Culleton who had just returned from Thurles where Laois minors vanquished Cork.

Each jumper was sponsored. Martin Langton from Ratheniska raised a whopping €800 to go towards Laois Cancer Research.

On Friday night crowds gathered in Bergins bar where Richard Oxley was given the title of festival bachelor along with €100 prize money.

Judges declared the local lad to be the finest sample of manhood among the eight competitors.

On Saturday night the Round Tower queen was crowned. Tara Lynch, representing Timahoe Macrite, was the lucky winner.

Tara received a €100 voucher, a tiara and a bog oak replica of the round tower crafted by Roghan Headen.

Aside from bungee jumping, tug o’ war contests also took place on Sunday. The Lynch Plant Hire Team coached by Seamus Cranny of Abbeyleix won for the third year in a row, beating the Unbelievables in the final. Plaques were presented to all participants.

Sheaf throwing, a dog show, a vintage tractor display, bouncing castle, an ICA stall and more were part of the Festival.

Commenting on the event, Roghan Headen, Chairman and PRO of the organising committee, said “The festival was a great success. People didn’t mind the rain and there was a great carnival atmosphere.”

SEE ALSO – In Pictures: Timahoe rolls back the years with fun-filled Heritage festival