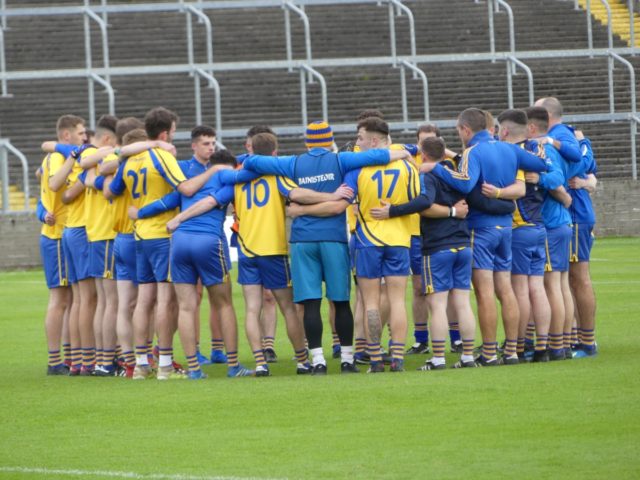 O’Dempsey’s will take on Castletown in the Laois JFC final after three first-half goals set them up for victory over The Heath.

The Killenard men hit three goals in the second quarter of the game to take total control, and despite a spirited effort from The Heath, they never really threatened to haul in O’Dempsey’s.

The opening quarter of the game was a cagey affair, as semi-final nerves mixed with a greasy surface made it difficult for either team to settle. The Heath finally opened the scoring in the fifth minute with a free from Leon Holland, and O’Dempsey’s responded three minutes later through Daithí Howlin.

O’Dempsey’s were enjoying the lion’s share of possession and territory, and they almost got in for a goal in the 12th minute, but Billy Hennessy made an excellent save to deny Pat Maher.

The Killenard men took the lead a minute later when Eoin Finlay’s poorly hit 45 was salvaged by Darren Finlay, as he stooped to get a fist on the ball and somehow direct it over the bar. Ciaran McManus added another soon after and then midfielder Tom Behan got in on the act, as the gap now went out to three.

The Heath were struggling to get out some fluency into their game and were punished in the 21st minute, when Mark McCormack got the finishing touch to a good O’Dempsey’s move for the opening goal of the game.

The response from The Heath was promising, as teenage corner-forward Leon Holland kicked two excellent points from play to give his team a timely boost, but it wasn’t enough.

O’Dempsey’s finished the half strongly as Tom Behan tapped the ball to the net after it rebounded off the post, and then Eoin Finlay won, and converted, a penalty to see them lead 3-4 to 0-3 at half time.

The Heath started the second half brightly and created some good chances, but they couldn’t turn them into scores, the closest they came a lobbed effort from Jordan Ratcliffe that Shane Hogan managed to claw away.

O’Dempsey’s economy in front of goal was showcased after that, as Liam Whelehan pointed with their first real attack of the half. Eoin Finlay followed that up with a couple of points and The Heath’s task got even bigger.

Donal Bigley and Jack Delaney pointed in quick succession to try to get them into the game, but again O’Dempsey’s hit back, Eoin Finlay the scorer once again.

The Heath had their best spell of the game after that as they hit three points without reply, Shane Booth getting one and Leon Holland getting the other two. That left three goals between them and The Heath were hoping a quick goal at this stage might put the game within reach, but O’Dempsey’s quickly dispelled those notions.

Eoin Finlay replied for O’Dempsey’s with a free and a second point for Ciaran McManus all but wrapped up the win. The final score came from Daithí Howlin, as O’Dempsey’s booked their date with Castletown.