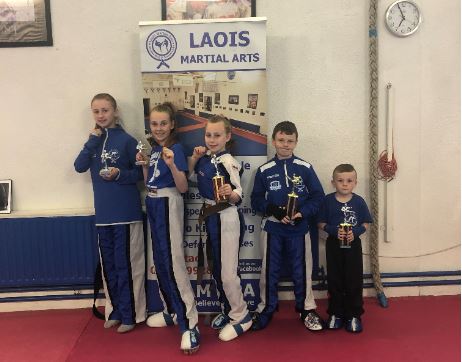 Laois Martial Arts were in action again at the Tallaght Open recently.

The team of 7 competed in both Light Contact and Point fighting.

The youngest member of the team, Peter McInerney Under 6 Novice, competed in the Light Contact under 6 years.

This was Peters second time to compete, securing a second place medal after a thrilling fight with a Dublin opponent.

Anthony Conroy Under 8 Intermediate, took to the mats in Point fighting competing very well on the day and narrowly missing out by one point in a back and forth contest, securing a third place medal, he would also go on to win bronze in light contact.

Ciara McPartlan Under 12 advanced, competed in Point fighting against a Co. Offaly opponent.

The fight didn’t go her way but a well deserved 3rd place was earned.

Hannah Reinhardt, Under 10 Advanced was in flying form on the mats competing in both the intermediate and advanced sections in Point fighting coming away with a 2nd place finish after some thrilling fights.

Hannah would go on to secure a 3rd place finish In Light Contact as well.

Aodhan O Brien Under 10 Novice, had a super day of competition winning his first gold medal for him in the sport and for the club on the day.

Jack Eakins, our solo senior of the day competed in the -75kg novice mens Light Contact, securing a well earned second place trophy for his efforts.

Coach Shane Culleton commented that the team had another great day on the mats, progressing all of the time and improving.

The level at these national events is remarkable and really shows where the sport is at in Ireland.

For details on Kickboxing in Co. Laois for all ages, Contact Shane on 0863399287 or on Facebook @ Laois Martial Arts