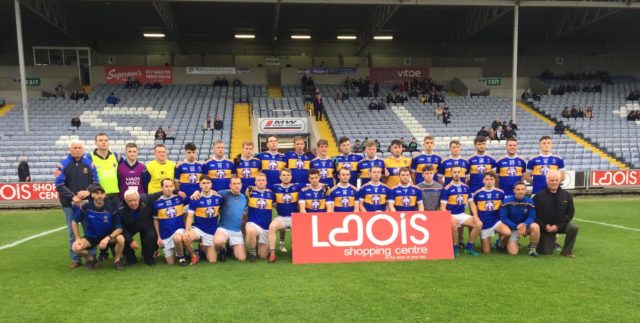 Brought to you in association with The Anvil Inn

Castletown’s three year winning streak is over as they fell to O’Dempsey’s in tonight’s Junior football final.

O’Dempsey’s led by four points at half time but Castletown came back to draw level as we entered the final quarter.

However O’Dempsey’s, who lost this final to Annanough last year, had a real eye for goal this time and substitute Stephen O’Leary came off the bench to score a third goal minutes from the end to seal the win.

O’Dempsey’s will move up to the Intermediate ranks next year while for Castletown, their year is not yet over, as they will go on to represent Laois in the Leinster Junior championship as second teams of clubs are not allowed to compete.

The rain began to pelt down as referee Clifford Ward threw the ball in and it was O’Dempsey’s who enjoyed the better of the opening ten minutes.

Brendan Reddin finally opened Castletown’s account and although Eoin Finlay instantly wiped that score out, the former were slowly beginning to creep into the game.

They had two goal chances before the midpoint of the half with substitute Kevin Carroll seeing his effort cleared off the line by Chris McCormack before Brendan Reddin fired wide after a great run by Conor Phelan.

But the goal they deserved did come after 14 minutes when Martin Phelan cut in off the left a fired a shot into the top corner of the net to give Castletown the lead for the first time.

But they would hold that advantage for less than a minute as from the resulting kick-out, Daithi Howlin raced down the terrace side and crossed the ball to Mark McCormack who shot low into the bottom corner.

However, O’Dempsey’s had another kick in them left in the first half and when Mark McCormack broke a ball to Howlin, he combined with Finaly to fist the ball over the advancing Castletown keeper for the game’s third goal.

Castletown brought the half to a close with an Aaron Gaughan point but they headed for the dressing rooms trailing 2-5 to 1-4.

Castletown began the second half well and a James Mullaney point cut the deficit back to the goal early on.

The Mullaney brothers, James and Ryan, landed the next two and the gap was back to the minimum with 42 minutes on the clock.

And the sides were level right at the midpoint of the half when Ryan Mullaney collected a ball in midfield and soared through the O’Dempsey’s defence to clip one over the crossbar.

Castletown had chances to take the lead but they went astray and O’Dempsey’s ended their 17 minute scoring drought through substitute Stephen O’Leary to regain the lead before a brace of Eoin Finlay frees put them three up after 50 minutes – 2-8 to 1-8.

Castletown needed a big finish to the game and a Brendan Reddin point got them back to within two before disaster struck three minutes from the end.

Castletown kept going though and although they lost Aaron Gaughan to a straight red card, Martin Phelan did strike for a late goal but it wasn’t enough.