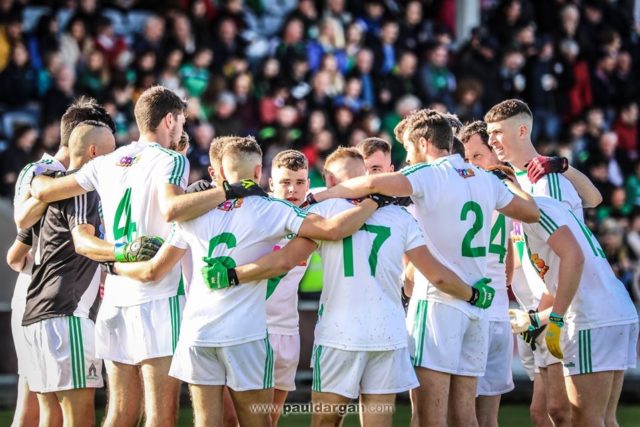 Killeshin are through to the Laois SFC final for the first time in the club’s history following a thrilling win over Ballyfin in O’Moore Park this evening.

In a cracking game of football, excellent performances from Eoin Lowry, David Aston, Cathal Brennan and Stephen Attride were crucial in seeing off the challenge of the brilliantly brave Ballyfin side that have lit up this year’s championship.

The mighty Portlaoise side await in the final for Killeshin in ten days time.

After slugging it out in dreadful conditions on Sunday, this was far easier on the eye, particularly in the first half.

Both sides went at it an incredible pace and Killeshin hit the first two points from Cathal Brennan and Adam Deering.

Ballyfin moved Ricky Quillinan in full-forward early on and peppered him with long ball. It worked well too. He was fouled from one such attack for Sean Moore to point the free and then Moore got the game’s first goal – and his sixth of the championship – when he flicked to the net after his brother James slipped taking a long-range free and dropped his shot short.

The brilliant Eoin Lowry pointed either side of a Quillinan point – again after a great ball in from Darragh Connolly – but Killeshin responded swiftly with two David Aston frees.

Moore and Aston swapped frees and then George Lanham came up from corner-back to level it.

Killeshin again though had a response to go two up – with Lowry and Aston landing frees, Aston’s effort from just outside the ’45.

Ballyfin had the last score of the half, however, with the influential James Finn pointing just before the break. At the end of a lively opening half, Killeshin led 0-9 to 1-5.

A brilliant James Finn point levelled things up shortly after the restart but Killeshin hit the next three, a free and ’45 from Aston and a punched effort from Cathal Brennan.

Two Sean Moore frees brought it back to a point again entering the final quarter but Killeshin always seemed to have an answer.

Cathal Brennan popped over his third point from play after a great run from Stepehn Attride (who again kept tabs on Sean Moore at the other end) and Eoin Lowry and Aston (free) pushed them four up with nine minutes of normal time to play.

Darragh Connolly and James Finn pulled back points for Ballyfin but Cathal Brennan responded again with his fourth point from play in what was a super performance and David Aston’s eighth made sure of it, even if Killeshin had to hang on through five minutes of injury time.

Ballyfin’s brilliant season is at an end.

Killeshin have a senior county final against Portlaoise to look forward to on Sunday week.