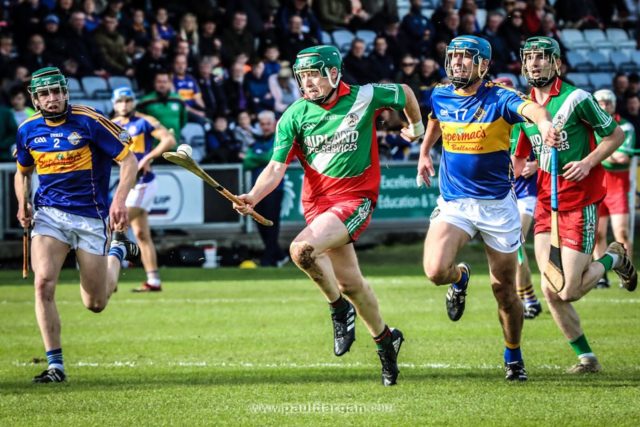 After two Laois SHC semi-finals in O’Moore Park on Sunday afternoon, we look back on some of the big talking points from the two games.

This time last year, Ross King was in incredible pain on the back of having teeth smashed in in Rathdowney-Errill’s Laois SHC final loss to Camross.

And to rub salt into the wounds, the incident was then mocked on social media with images circulating of three Camross players jeering his injury during their celebrations – joyously flashing exaggerated smiles showing off their front teeth.

It all contributed to a poisonous aftermath with social media alive with the commentary.

Fast forward 12 months and the sides meet again in the championship semi-final, Camross in search of a third title in a row.

There had been little to separate the sides but with a couple of minutes remaining, Camross hit three points in a row to go two up – the first time they had led since the opening minute of the game.

But as the game entered injury time, Rathdowney-Errill attacked, found Ross King and he rifled an unstoppable shot past Tadhg Doran in the Camross goal.

It put Rathdowney-Errill one point up and Camross couldn’t manage a scoring chance to level it. King’s goal was the winner.

Prior to that, King had had a disappointing game, missing a great goal chance in the opening minute and despite hitting a nice point early in the second half he also saw a couple of other chances go astray.

But when he got that last chance, he took it with aplomb.

What a way for things to go full circle.

Injuries strike at the wrong time for Camross

Camross never appeared to be firing on all cylinders this year like they did in 2017 and 2018 when they won back-to-back championships.

An early-season injury to their talisman Zane Keenan was a huge blow and then they lost goalkeeper Thomas Dunphy and corner-back Andrew Mortimer in the leadup to this game.

They did use a number of their intermediate-winning team for the first time this year and Keenan came on as a sub for the last couple of minutes, but injuries at this time of the season are keenly felt and the absences certainly didn’t help.

Goals dry up for Camross

We mentioned it here before but Camross’s goal threat abandoned them this year and for the fourth time in five games this year they failed to raise a green flag.

Prior to this year, they had scored goals in 15 games in a row. When they dried up, so too did their wins and they fell to three championship losses this season – to Borris-Kilcotton, Clough-Ballacolla and Rathdowney-Errill.

Camross will be back as challengers, as they always are, but until they rediscover their ability to score goals, they’ll struggle to win games.

PJ Scully on fire for Borris-Kilcotton

PJ Scully’s free-taking, from all distances and angles, is just incredible and he shot the lights out again on Sunday in their 0-25 to 1-15 win over Clough-Ballacolla in the first of the two semi-finals.

Fourteen of his points came from frees, one was a beautiful sideline cut and he added three points from play in the second half.

Borris-Kilcotton may be slightly concerned that so much is coming from Scully but you can’t but admire the scale of the scores he is consistently putting up.

Like Camross in the second game, Clough-Ballacolla were also struck with injuries/illnesses at the wrong time.

Lee Cleere was struck down with a sickness before their last group game against Camross and though he’s on the mend, he wasn’t an option for Sunday. Stephen ‘Picky’ Maher had his appendix removed last week. He togged out and came on for most of the second half and hit a couple of fine points from play and frees.

But they were two big losses that Clough-Ballacolla couldn’t do without in a championship semi-final and another year slips by on them since their last triumph in 2015.

Final pairing a repeat of 2016 decider

The drawn match was one of the greatest finals of all time – one that finished level 2-26 apiece. Borris-Kilcotton won the final two weeks later for the first time in their history.

A similar game to the drawn 2016 final will do just fine!