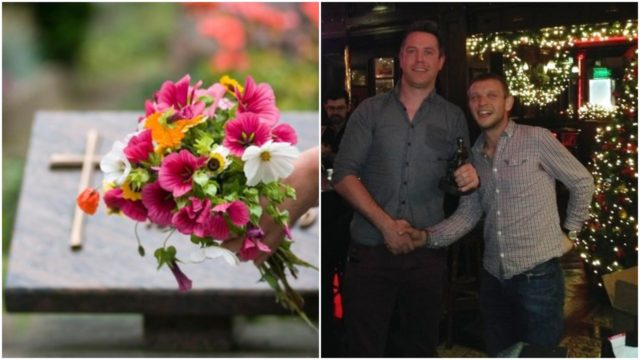 Mr Fingleton, who was a teacher in Drimnagh Castle College in Dublin, passed away following a battle with illness.

Eoin was a member of the Portlaoise senior hurling team that won the Laois championship in 2004 and members of the club provided a guard of honour on the way to the church in Portlaoise where his funeral took place on Sunday.

Mr Fingleton also played for Realt Dearg hurling club in Dublin and they paid tribute to him online.

They said: “The club is deeply saddened to hear about the passing of former club member and player Eoin Fingleton.

“The club sends it condolences to the Fingleton family and friends. Ar dheis dé go raibh a anam.”

Meanwhile, a number of Eoin’s former students have posted tributes to their teacher online.

One of them, Warren Farrell, tweeted a lovely tribute to his former teacher.

He said: “Thoughts and wishes to all in Drimnagh Castle College after hearing of the extremely sad passing of Mr Eoin Fingleton.

“I had the privilege to have Mr Fingleton as a teacher and mentor.

“Sending sympathy and condolences to all in the Drimnagh Castle school community.”

A minutes silence was also observed in honour of Eoin before Sunday’s Laois senior football final before Portlaoise went on to defeat Killeshin.

Eoin, who was from Ballytegan, Portlaoise, lived in Sallins Park, Sallins along with his fiance Sarah.

He is survived by his parents Mick and Deirdre, sisters Aoife and Ciara and brother Brian as well as his grandmother Louise.

May Eoin Rest in Peace.