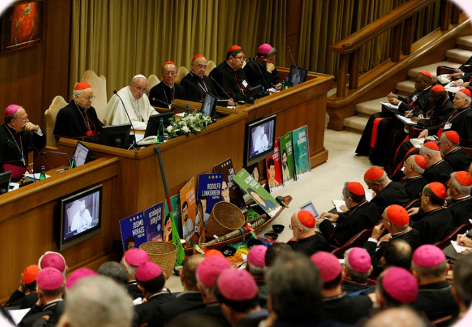 The Synod of Bishops for the Pan-Amazon Region was controversial long before this Autumn. Self-described
orthodox Catholics have worried over its potential impact far from the Amazon.

One of the issues to be discussed at the synod is the acute shortage of priests in the nine countries that make up Amazonia.

A proposal that has been kicked down the road for years is the ordination of what are known as viri probati, a Latin expression best translated as “family men of virtue.”

Some view it as an opening for the wider church to begin accepting married men for the priesthood. (News flash, it already does in a number of traditions united to Rome.)

Worse, they suspect the crashing of the male celibate priesthood by male not-so-celibates could be a vanguard move to women’s ordination.

These anxieties are confounding to the bishops and laypeople who actually live in the Amazon, who are acutely aware of the spiritual devastation the priest shortage is causing.

Many Amazon communities may not see a priest more than two or three times a year.

But the synod’s working document, building on the agenda set out in the pope’s 2015 encyclical Laudato Si’ (On Care for Our Common Home), actually devotes most of its ink to different crises of the Amazon, the unique fragility of its ecology and a related threat to the self-determination of its indigenous people.

And the Amazon bishops’ intervention on these matters could not be more timely.

Brazil is the region’s geographic and economic giant.

A friend to extractive industries of just about any sort, its
populist president, Jair Bolsonaro, promises to overturn decades of environmental policy, rolling back prohibitions built into the 1988 constitution that sought to protect and empower indigenous people and restrain overexploitation of the fragile rainforest ecosystem.

The indigenous reserves created under that constitution have
helped Brazil’s indigenous population rebound after centuries of decline. Now they are under existential threat again.

Within weeks of Bolsonaro’s swearing in, Brazil’s satellite-based DETER system – Deforestation Detection in Real Time – reported an 88% increase in deforestation in June 2019 compared to the same month in 2018.

Trees were being axed at an even more torrid rate the following month, and on July 23 rd Emrya Wajãpi, leader of the indigenous Wajãpi people, was stabbed to death by gold miners illegally working in the protected reserve of the Wajãpi community.

Bolsonaro has made a particular goal the weakening of indigenous people’s territorial claims, perceiving them as barriers to development and their claims to tribal land and esteem for the sacredness of creation as backward and irrelevant.

Revisiting the historical sins of the past is bad enough, but the kind of accelerated development Bolsonaro seeks is not just a threat to indigenous people.

Opening up the region to greater forest clearing for farming, grazing, or the ecological ruinous lumber and mining industries will mean more rainforest loss than the Earth can stand.

The Amazon region has been called the lungs of the world for good reason: Its forests remain a final refuge for a disproportionate percentage of the planet’s surviving biodiversity and a vast reservoir of carbon.

Preventing deforestation in the Amazon is fundamental to any hope of combating climate change.

Allowing Brazil’s indigenous people to maintain control of their land and their destiny is not just a matter of geopolitical and historical justice.

It is not just the minimum the church demands to protect their human dignity.

It is not fair to burden them so, but it is the stewardship of indigenous people that offers the best chance for the preservation of this essential ecosystem, a final stand protecting the rest of the world from the worst impacts of climate change and greed.

All-powerful God, you are present in the whole universe and in the smallest of your creatures.
You embrace with your tenderness all that exists.
Pour out upon us the power of your love, that we may protect life and beauty.
Fill us with peace that we may live as brothers and sisters, harming no one.
O God of the poor, help us to rescue the abandoned and forgotten of this earth, so precious in your eyes.
Bring healing to our lives, that we may protect the world and not prey on it, that we may sow beauty, not pollution and destruction.
Touch the hearts of those who look only for gain, at the expense of the poor and the earth.
Teach us to discover the worth of each thing, to be filled with awe and contemplation, to recognise that we are
profoundly united with every creature as we journey towards your infinite light.
We thank you for being with us each day.
Encourage us, we pray, in our struggle for justice, love and peace.