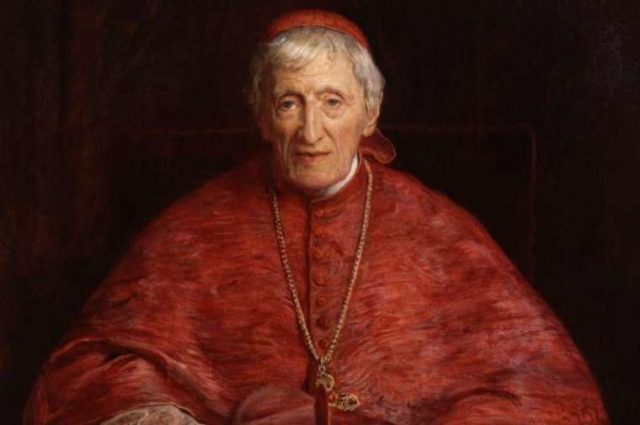 Pope Francis decreed that Newman and four other blesseds will be canonized together in St. Peter’s Square.

Indian Sister Marian Thresia, founder of the Congregation of the Sisters of the Holy Family, Italian Sister Giuseppina Vannini, Brazilian Sister Dulce Lopes Pontes, and Marguerite Bays, a Swiss consecrated virgin of the Third Order of St. Francis will be
canonized alongside Newman.

Their canonizations take place during the Special Synod of Bishops from the Pan-Amazonian region to be held at the Vatican October 6-27.

Originally an Anglican priest, he converted to Catholicism in 1845  and his writings are considered among some of the most important Church-writings in recent centuries.

Ordained a Catholic priest in 1847, he was made a cardinal by Pope Leo XIII in 1879, although he was not a bishop.

Newman’s conversion to the Catholic faith was controversial in England, and resulted in him losing many friends, including his own sister who never spoke to him again.

The British cardinal founded the Oratory of St. Philip Neri in England and was particularly dedicated to education, founding two schools for boys.

He died in Birmingham in 1890 at the age of 89. In October, Cardinal Newman will become Britain’s first new saint since the canonization of St. John Ogilvie in 1976.

At Newman’s beatification Mass in Birmingham, England in September 2010, Pope Benedict XVI said that Newman’s
“insights into the relationship between faith and reason, into the vital place of revealed religion in civilized society, and into the need for a broadly-based and wide-ranging approach to education were not only of profound importance for Victorian England, but continue today to inspire and enlighten many all over the world.”

“What better goal could teachers of religion set themselves than Blessed John Henry’s famous appeal for an intelligent, well-instructed laity: ‘I want a laity, not arrogant, not rash in speech, not disputatious, but men who know their religion, who enter into it, who know just where they stand, who know what they hold and what they do not, who know their creed so well that they can give an account of it, who know so much of history that they
can defend it,” Pope Benedict said.

The first miracle attributed to Newman’s intercession involved the complete and inexplicable healing of a deacon from a disabling spinal condition.

His second miracle concerned the healing of a pregnant American woman. The woman prayed for the intercession of Cardinal Newman at the time of a life-threatening diagnosis, and her doctors have been unable to explain how or why she was able to suddenly recover.

“God has created me to do Him some definite service. He has committed some work to me which He has not committed to another. I have my mission. I may never know it in this life, but I shall be told it in the next.

I am alink in a chain, a bond of connection between persons,” Blessed John Henry Newman wrote.

“He has not created me for naught. I shall do good; I shall do His work. I shall be an angel of peace, a preacher of
truth in my own place, while not intending it if I do but keep His commandments,” he said.

In 1833, the young theologian and Anglican vicar John Henry Newman (1801-90) was traveling in the Mediterranean when he was struck down by a fever that nearly killed him.

“My servant thought I was dying and begged for my last directions,” he recalled in his autobiography.

“I gave them as he wished, but I said, ‘I shall not
die, for I have not sinned against light,’ Newman recovered slowly, but felt desperately homesick.

On the way back to England, he took an orange boat from Palermo to Marseilles which was becalmed in the Straits of Bonifacio.

Thus stranded, in an exhausted and emotional state, Newman was impelled to write this verse as a meditative poem called ‘The Pillar of the Cloud’, expressive of his longing for consoling Christian certainties in an age of mounting doubt.

There has been much puzzlement over the nature of the ‘kindly light’ and the identity of the lost ‘angel faces’ in
the last line.

When challenged on these points, Newman replied crisply, “I am not bound to remember my own meaning.”

He was displeased when the poem was turned into a hymn in 1845 – by which time he had converted to Catholicism, where congregational hymn-singing formed no part of divine service.

To no avail, his words embodied the maudlin spirit of the age, to the point at which Queen Victoria asked it to be read to her as she lay dying.

It was also the last hymn to be sung on the Titanic – not, as is sometimes said, as the liner was actually sinking, but at the final service given on board by the chaplain on the afternoon before the disaster.

Personally I pray this beautiful hymn every night after night prayer…
Lead, kindly Light, amid the encircling gloom, lead thou me on;
The night is dark, and I am far from home, lead thou me on.
Keep thou my feet; I do not ask to see, the distant scene; one step enough for me.
I was not for ever thus, nor prayed that thou, shouldst lead me on;
I loved to choose and see my path; but now, lead thou me on,
I loved the garish day, and, spite of fears, pride ruled my will: remember not past years.
So long thy power hath blessed me, sure it still, will lead me on,
O’er moor and fen, o’er crag and torrent, till the night is gone;
And with the morn those angel faces smile, which I have loved long since, and lost awhile.

O Lord, support us all the day long, until the shadows lengthen and the evening comes, and the busy world is hushed, and the fever of life is over and our work is done.

Then, Lord, in your mercy, grant us a safe lodging, a holy rest, and peace at the last, through Christ Jesus, our
Lord. Amen

SEE ALSO – Fr Paddy: An ‘Extraordinary Mercy’ – ‘I give you the power of the keys’