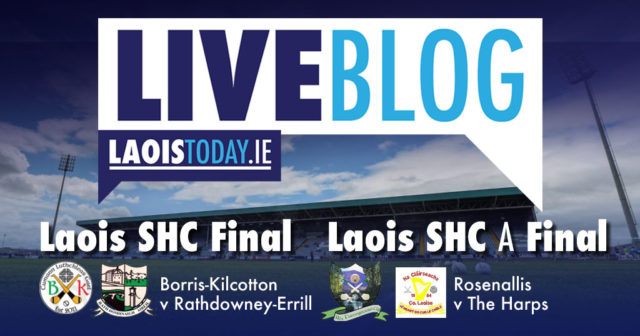 County final day is upon us and four lucky clubs are the last ones left standing.

The Laois SHC ‘A’ and SHC finals take place in O’Moore Park as part of a double header with the action getting underway in Portlaoise at 2pm.

First up is the Senior ‘A’ final between The Harps and Rosenallis while the big event of the day is the Senior decider between neighbours Borris-Kilcotton and Rathdowney-Errill.

The Rosenallis hurlers are seeking to complete a hurling/football double having won the intermediate football title three weeks ago while The Harps are bidding to win a first ever adult championship crown with their first team.

The Harps were beaten in last year’s final by Portlaoise and will be looking to go one step further on this occasion.

The Harps beat Rosenallis by 2-18 to 0-18 in the opening round of the group stages but that will count for little today.

The big game is the meeting of Borris-Kilcotton and Rathdowney-Errill at 4pm. This is a repeat of the 2016 decider which Borris-Kilcotton won after a replay to claim their first ever senior triumph.

Rathdowney-Errill needed an injury time winner from Ross King to see off Camross in the semi-final and come in as the slightest of favourites.

SEE ALSO – Jobs in Laois: Check out all of the recent job vacancies as advertised on LaoisToday