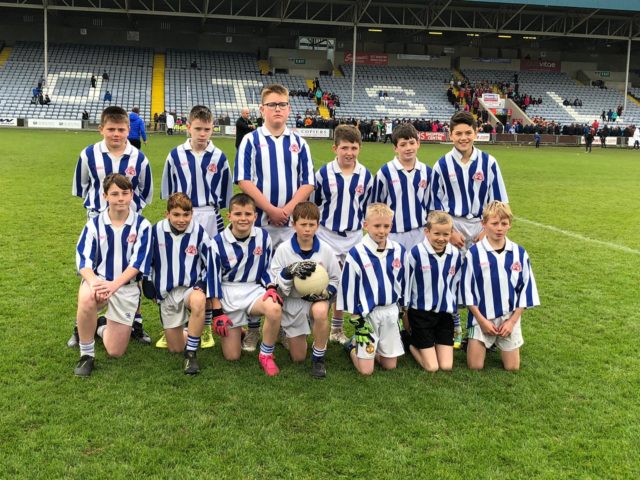 Ratheniska and Mountmellick went to battle this afternoon in the Roinn 2 Boys Shield Final where Mountmellick came up trumps.

Mountmellick got the game up and running with a free from Shane Conran. Ratheniska were not long in getting their first score from Matthew Cunningham.

Eoghan Nelson then scored the first of his tally with a point for Mountmellick.

Daniel Downey then took centre stage for Ratheniska with a superb goal followed up by points from Declan Fingleton and Cunningham again.

Eoin Coss had the next goal followed by an Eoghan Nelson point in the lead up to the break for Mountmellick to leave the halftime score at 1-3 a piece.

The first two scores of the second half came from Ratheniska’s Barry Connolly before Mountmellick’s  Oisin Hade and Oisín Dunne levelled the game.

A goal came for Ratheniska just moments later to put the side ahead. Matthew Cunningham put the Green and yellow side ahead by four straight after.

A screamer then came from Oisín Hade to put 3 between the sides.

Moutmellick’s Shane Conran followed up with another goal while a Ratheniska point came from Matthew Cunningham. Oisín Hade had the last say for Mountmellick to see his side over the line.