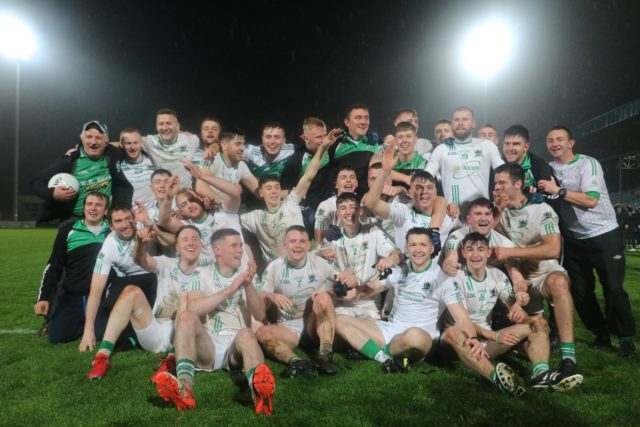 Rosenallis are through to the Leinster Intermediate football championship semi final following a hard-fought win over Fr Manning Gaels in Killoe this afternoon.

Paddy Dunne’s charges, who were playing in their first competitive football game in five weeks since their county final triumph over Clonaslee, are now just one step away from another final.

But this victory was not as simple as the margin of victory would suggest as the Laois side had to recover from a very slow start to run out winners.

Ronan Murray and Cillian Callally were excellent for the victors along with Eoin Dunne while the defence really stood firm for 50 minutes – after a shaky opening ten.

Rosenallis were rattled but they won a penalty two minutes later which Ronan Murray converted.

Eoin Dunne had Rosenallis level after 20 minutes and while Dean Cosgrove briefly regained the lead for Fr Manning Gaels, Rosenallis finished the half very strongly.

Cillian Callally added 1-1 while Eoin Dunne landed a late score to make it 2-4 to 1-2 to Rosenallis at the break.

Rosenallis now had to play against the win in the second half and Fr Manning Gaels instantly cut the gap to three through Martin Cassidy and Aaron Quinn.

But their shooting would let them down in the second half and they finished the game with a total of 16 wides.

Cillian Callally and Ronan Murray edged Rosenallis 2-6 to 1-4 ahead as we entered the final quarter and from there – they never looked in any danger.

Pauric Gill and Anthony Keane both pointed for the hosts but Tommy Shelly in the Rosenallis goals wasn’t troubled as the men in front of him defended with great composure.

In the end, points from Murray, Callally and Mark Dunne saw them home and they will now face Kilkenny champions Mullinavat in the semi final.

They will be away to the Kilkenny men in two weeks time after they caused a major shock this afternoon by defeating Dublin side Ballyboughal.