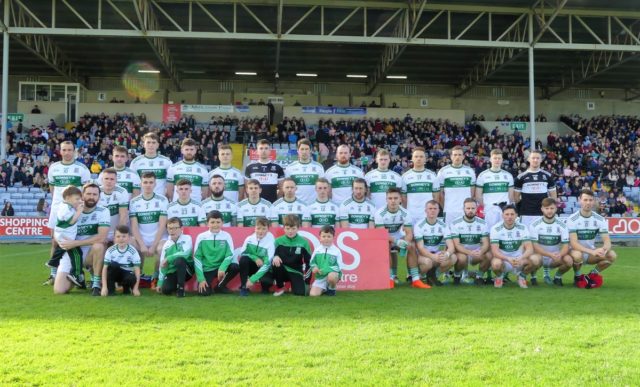 Holy God what a game.

Portlaoise are through to the Leinster semi final following a penalty shoot out win over St Pat’s this evening.

It was a crazy game and we’ll have to have Talking Points afterwards to cover it all.

St Pat’s really frustrated Portlaoise throughout by doing two fundamental things excellently – defending and winning their own kick out.

All bar one of Shane Doyle’s kick outs in the first half found a teammate while Conor French operated as a sweeper.

St Pat’s dropped all of their team bar Thomas Kelly back behind the ball at times when they were defending and this worked because Portlaoise were too slow to move the ball up the field.

The Town did get the game’s first two scores but St Pat’s went into the lead after six minutes when Paul O’Brien released captain Stephen Duffy and he volleyed the ball to the net.

Portlaoise levelled the game instantly through Benny Carroll but that would be the only time they had parity in the opening half.

Matthew Traynor, John Crowe and Thomas Kelly dissected the posts for St Pat’s and although Benny Carroll, Bruno McCormack and Kieran Lillis replied, Kelly kicked the final point of the half to leave them 1-4 to 0-5 ahead.

We had to wait seven minutes of the second half for an opening score but as soon as Bruno McCormack kicked it, Bryan Doyle replied to keep two in it.

Portlaoise continued to struggle to break down St Pat’s and they then lost talisman Bruno McCormack to a black card as we entered the final quarter of the game with the score at 1-5 to 0-6.

Portlaoise had gone for Graham Brody for his first appearance of the year now and he was instrumental in their next point by Conor Boyle to reduce the gap to one with ten minutes to play.

Conor French put Pat’s two clear but Benny Carroll’s second free made it 1-6 to 0-8 after 53 minutes.

David Holland then had a great chance to win the game when Paul Cahillane slipped him in one on one but he smashed his shot into the side netting.

Four minutes of injury time were signalled and in the first minute of it Ronan McEvoy picked out Paul Cahillane but he went for goal and the shot went wide.

But two minutes later Portlaoise were level when Brody set up Lillis to score.

Ronan McEvoy had the chance to win the game with the final kick but the ball went wide and extra time would follow with the score at 0-9 to 1-6.

Portlaoise took the lead for the first time in the match since the opening ten minutes through Damon Larkin but Pat’s captain Stephen Duffy instantly levelled the game.

And then disaster struck for Portlaoise when Tommy Kelly’s mis-hit shopped dropped short and Jonathan Delahunt got up above Graham Brody and fisted the ball down to Paul O’Brien who stroked it into the net.

Paul Cahillane hit back but Portlaoise trailed 2-7 to 0-11 at half time in extra time.

Portlaoise looked in serious trouble but three minutes into the second half of extra time a wonderful passing move began by Chris Finn ended with Kieran Lillis smashing the ball to the net.

But Pat’s refused to go away and Matthew Traynor levelled the game meaning we went to penalties with the score 2-8 to 1-11.