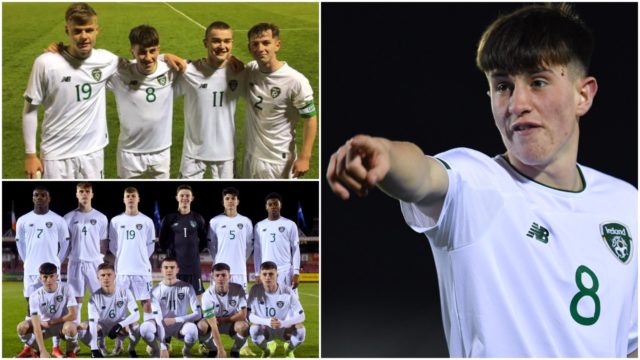 The Republic of Ireland U-17s collected their second win of the initial qualifying phase with a 3-1 victory over Montenegro in Turner’s Cross last night.

Portlaoise’s Colin Conroy was once again selected in midfield for the clash as his side followed up Tuesday’s thrashing on Andorra with another fine win here.

Andorra’s shock 1-0 win over Israel means that they and Israel sit on three points each directly below Ireland with one game to play.

The only way that Conroy’s side will not progress to the Elite Qualifying phase is if they lose to Israel by a substantial margin and Andorra defeat Montenegro by a huge margin too.

With both of those scenarios extremely unlikely, it means that Colin O’Brien’s charges are all but through with their final game to come on Tuesday afternoon.

Conroy had a goal and assist in the win over Israel but he and his teammates were frustrated for much of this game by a defensive Montenegro outfit who managed to get to half time with the score at 0-0.

The break through eventually came on 55 minutes when Ben McCormack’s free kick on the angle of the penalty area was whipped in and it evaded everyone and nestled in the bottom of the Montenegro keeper’s net.

But their lead didn’t last long. Ognjen Bakic found himself one-on-one and despite his effort deflecting off the outstretched leg of Daniel Rose it rolled into the bottom corner.

Ireland came back and McCormack’s long range effort had keeper Ivezic’s at full stretch to tip it around the post for a corner.

From the resulting corner St Patrick’s Athletic man McCormack found the head of Anselmo Garcia McNulty to nod in on 64 minutes and send Turner’s Cross wild.

The third did eventually come and it was McCormack again. Kyle Conway dribbled his way into the Montenegro box and struck a low effort that hit the post. It fell to McCormack who fired home to make it 3-1.

They face Israel at 2pm on Monday in Turner’s Cross where a win will leave them top of Group 3 and straight through to the final qualifying stage.