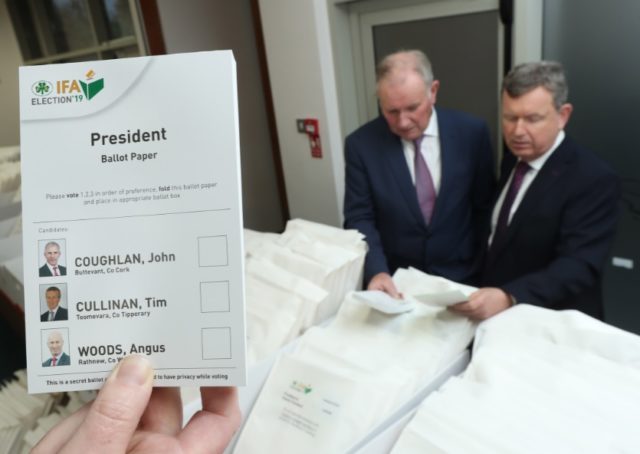 Approximately 2,000 Laois farmers across 20 different branches are entitled to vote as the IFA presidential election gets underway today.

IFA members vote for a new president every four years and this year they will elect a 16th president in their history.

Members are entitled to vote in their branch at designated times over the next three weeks.

For example, Luggacurren, Mountmellick and Mountrath branches vote this evening, November 25, while Vicarstown and Durrow will be the last branches in the county to vote on Friday week, December 6. There are some branches in other counties that won’t vote until Friday, December 13.

The IFA national count will take place in the Castleknock Hotel in Dublin on Tuesday, December 17, and the new president will take up their role in January.

IFA members are also being asked to choose between Thomas Cooney from Laragh in Cavan and Brian Rushe from Carbury/Cadamstown in Kildare for the role of Deputy President.

IFA National Returning Officer Richard Kennedy has encouraged farmers to attend the Association’s 944 branch meetings in the 29 County Executives and vote for the positions of President and Deputy President.

“Our Presidential Election gives every member the same say in choosing the next President of IFA. It’s an important exercise in democracy and it affords farmers across all enterprises, and in every part of the country, an equal voice in deciding who is best placed to represent Irish farmers from 2020 on,” he said.

The candidates have engaged with members at 17 debates around the country in the last month.

The full list of voting dates and locations for the Laois branches is as follows. All meetings take place at 8.30pm though these times may change and you should check with your branch chairperson to confirm.