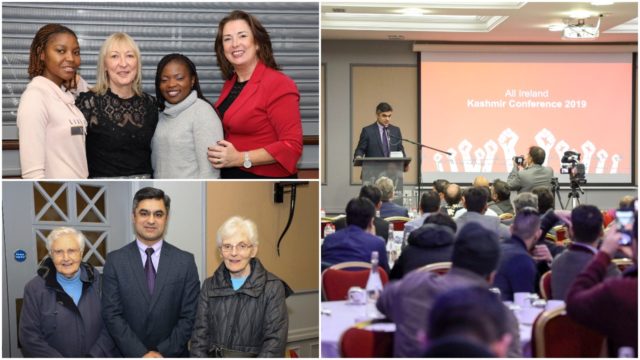 The Midlands Park Hotel was host to Ireland’s largest conference on the Kashmir conflict recently.

The conference was organised by Naeem Iqbal and was organised to show support and consolidation for people who are currently affected by the on going crisis and to act as an informative talk to educate people.

The Ambassador of Pakistan to Ireland, Mr Shuja Alam, TD and Chairman Public Accounts Committee, Mr Sean Fleming, Mayor Willie Aird and other elected members of the County Council in Laois were all in attendance at this conference, along with the leaders of Asian, African, European and middle eastern communities.

On August 5 2019, the Indian government revoked the special status accorded to Indian Occupied Kashmir in its constitution, the most far-reaching political move on the disputed region in nearly 70 years.

The world capitals and the international human rights groups condemned the move and are demanding the release of all political leaders, restoration of media and free movement of journalists and the general public with immediate effect.

The conference was an addition to serious of efforts being made all over the world to show support and solidarity with the innocent men, women and children living in siege for weeks.

The conference looked to be a great event and very informative.

A big thanks to Alf Harvey who was at the event for sending along these photos!