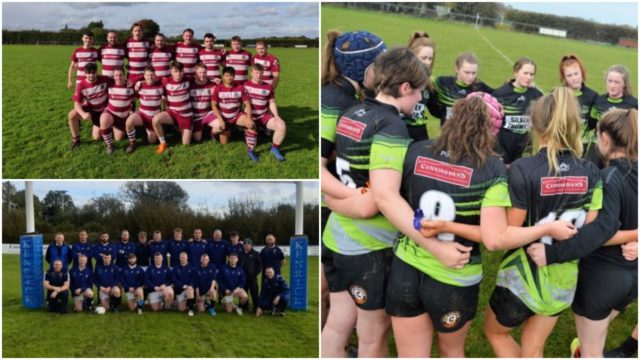 Storm Atiyah brought heavy rain and driving winds across the country yesterday but two Laois rugby clubs battled that and their respective opponents to claim victories.

Portlaoise and Portarlington men both enjoyed wins while the PortDara Falcons women’s team managed a losing bonus point on the road.

And here is how all three did it.

Portlaoise gave their promotion chances a real shot in the arm as they defeated Coolmine in Togher to join them in joint-second position in the table at the Christmas break.

Playing against a strong wind in the first half, Simon Williams crossed for the only score of the opening period with a great try.

Coolmine could not break down a strong Portlaoise defence in the first half and the sides headed for the changing rooms with the score at 5-0.

In the second half, Portlaoise continued their Coolmine shut out and also ensured that the Dublin side would leave Laois without a losing bonus point.

Full back John Scully kicked two penalties to give Portlaoise an 11 point win in the end.

That wraps up the league action for 2019 but Portlaoise do have one more game before the start of 2020.

On December 28, they will face Clondalkin in the Hosie Cup final.

Portarlington could find themselves top of the pile at Christmas after a brilliant win over Dublin Dogos on Sunday afternoon.

A bonus point victory on the road leaves them five points behind leaders Roscrea with a game in hand.

Portarlington made a great start with a brace of Andrew Evans penalties but they were hit with the concession of a try three minutes before the break from the men from the capital.

However, Ross Doyle crossed the line just on half time which Andrew Evans converted to leave Portarlington 13-6 ahead at the break.

And after that, Portarlington never looked back as Reece Cuddihy, Ross Doyle and the Anavil Storey all scored trys to seal a crucial bonus point win.

Portarlington’s game in hand will be played this Sunday against Ardee where a bonus point victory would see Portarlington end the first stage of the league in joint pole position.

The Falcons made the trip to Balbriggan to take on the home team who have been in good form in recent weeks.

The game was played in very difficult windy conditions and the Falcons settled the better of the two team making good progress into Balbriggan territory.

Quick ball through the hands and good heads up rugby allowed the Falcons to get the ball out to the wings to cross for two tries so the visitors went in at half time 10-0 up.

With the benefit of a building wind Balbriggan started coming into the game with some clever kicking making considerable inroads into the Falcons half.

Coupled with the kicking they had a very strong chase which saw them gain a penalty and then from play get over the line for their first try which was converted.

The second try came not long after when nearly under the post they crashed across the line again. They missed the conversion on this occasion so PortDara now trailed by 2 points with a 12-10 scoreline.

Another yellow card for Balbriggan for indiscipline but the injuries were building for the visitors and with a diminished panel the going was tough.

Many of the PortDara ladies were now playing in positions new to them and in the confusion they unlucky to concede another converted try to fall further behind.

The Falcons re-gathered themselves and battled back for a third try of their own which went unconverted try to take the score to 19-15 which is where it ended.

The Falcon’s are now in second position ahead of the Christmas break.