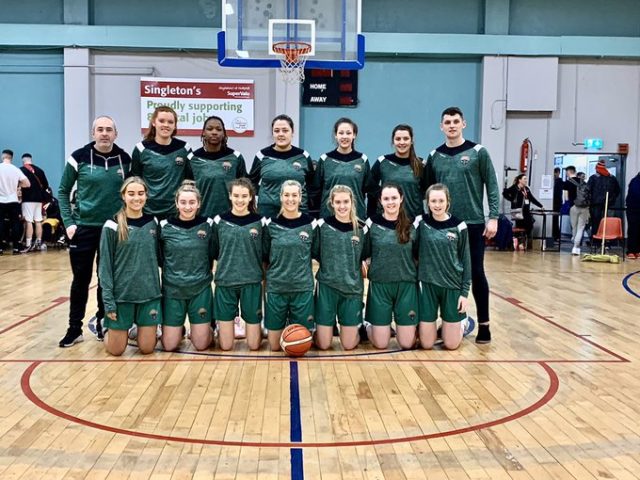 Portlaoise Panthers and their come backs – two peas in a pod!

Another brilliant game to watch from the Portlaoise senior women as they booked their spot in the Hula Hoops National Cup finals.

Claire Melia was back on the panel and was a huge asset. She has been playing in college ball in Philadelphia with St Joseph’s Hawks in Division 1 but was introduced to the game after six minutes and her presence and composure on the court was brilliant.

Four of the Portlaoise girls were back on the court after last night’s U-20 semi-final, the girls were on form and truly delivered.

St Mary’s had a strong start to the game going six points ahead in the opening five minutes. Jasmine Burke stepped to the free throw line and dropped the first scores for Portlaoise after six minutes.

Trudy Walker got another two points on the scoreboard but St Mary’s offense was working out better than Portlaoise’s attempts for the following minutes and went eight points ahead.

Multiple attempts from Portlaoise to get the ball inside under the basket to Melia and Walker were intercepted and St Mary’s had the momentum. The first quarter ended 14-4.

The opposition extended their lead to 21-4 in the second quarter. Ciara Byrne sneaked around the St Mary’s zone to add another two points before a turnover from Portlaoise on resulted in a super ball from Lisa Blaney to Byrne who was waiting under the basket and nailed the shot.

Panthers’ defense was starting to pick up and their momentum was back. Byrne, again, attacked the boards and scored before drawing the foul and scoring the free throw. The game was now back to 10 points.

St Mary’s pushed and their offensive rebounds were making the difference heading for the half time mark. Ciara Wheeler dropped three points from the corner and just moments later drew a foul in her next drive to the basket, scoring one free throw.

Trudy Walker collected the rebound and drew another foul, nailing both free throws. Portlaoise put the pressure on as they switched into man-to-man defense for the first time in the game with just 2:30 minutes to go.

Sarah Fleming got her first three pointer of the day. After a response from St Mary’s there was eight points in the game with a minute to go in the second quarter.

Both sides traded scores with Walker to the fore to leave the score 30-22 at half time.

As seen in last night’s U-20, these players have a brilliant attitude to go on and attack the second half, if anything, they work better under pressure. They had a strong start to their second half.

With around a minute gone in the third quarter, Portlaoise brought the game back to four points thanks to scores from Melia and Byrne. And then, in true Melia fashion, Claire brought it back to just a point after a brilliant shot from outside the three.

Moments later – Melia again, and Panthers took the lead for the first time. The home side went through a scoring drought of around seven minutes and Sarah Fleming’s basket put Panthers ahead by three.

Points came from Walker and Melia in between St Mary’s scores but Panthers’ still only lead by a point for the next few minutes before a score from the home side right before the end of quarter buzzer meant that Panthers were now trailing by a point heading for the final 10 minutes.

Walker was first up with two points on the board in Panthers’ first offensive play of the quarter. Melia found Walker once again in the next attack and now they were three points ahead.

Two more scores came in Panthers’ favour before Melia spotted Blaney on the wing, who dropped three points. Fleming added another two to put the girls ahead by three but this was still anyone’s game.

The fourth quarter belonged to Portlaoise. there was brilliant work done in both defense and offense by Melia, Walker, Blaney and Fleming.

Trudy Walker’s defensive rebounding made a huge difference helped along by Claire Melia. Panthers were not letting this game slip away which was evident from the effort and work.

Fleming, Walker, Melia and Blaney all added to the scoreboard and they began to take a comfortable lead. The home side tried multiple times to fight back but when this Panthers team go on a roll, it’s hard to stop them.

They finished out the game having won by 11 points