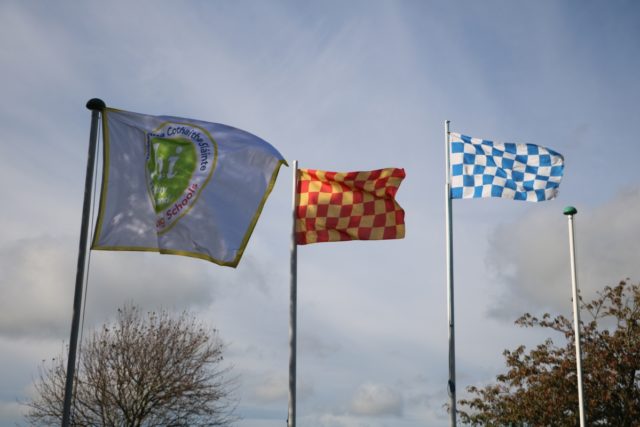 A proposal to introduce a one-way traffic system for the town of Durrow has been greeted with an emphatic thumbs down by the local councillor.

The suggestion was floated this week by Cllr John King, but was quickly knocked on the head by Durrow based councillor Ollie Clooney.

In fact the motion to design a one-way system to alleviate traffic congestion and improve road safety, most unusually, got no support and no seconder at the Municipal Council meeting this week.

Cllr King said he was asked to raise the issue and he did but none of the other councillors from the Borris-Mountmellick electoral area were willing to run with it.

Cllr King asked that the Council road design team conduct a traffic audit with a view to having a one-way traffic system in Durrow.

He also wanted them to carry out a traffic audit on the amount of heavy goods vehicles and milk lorries delivering to the Glanbia plant on a daily basis, traffic which had increased he maintained since the abolition of the milk quotas.

“If something is not done soon, Durrow will be a black spot for accidents,” Cllr King contended.

Not at all, said Cllr Ollie Clooney who was having none of it.

“I’d be totally against that proposal as it would be a total disaster for the town,” decried Ollie.

“What about the business people. There is very little congestion, it only makes the traffic slow down, what about it, it’s a traffic calming measure, and otherwise they’d be speeding up Carrigan Street once they see open road.

“This has been thrown around before this one-way, with no research behind it. I’d be completely and utterly against it as it would be bad for local businesses. There was a plan to by-pass the town years ago and it’s gathering dust, why not go back to that. This one-way idea is not the answer and as far as I’m concerned it it’s not broke, don’t fix it and I’m completely against this proposal,” Cllr Clooney was unequivocal in his stance.

Cllr James Kelly said that while he was an advocate for road safety he could not support the motion for a one-way either. The issue had been raised at a meeting in Durrow but there were those for and against.

“Businesses fear the impact it would have on them and local jobs, I’m not supporting the motion but something needs to be put in place to address the parking causing an impediment and t free up the flow of traffic. There is a lot of opposition to the idea of a one-way, especially among the business community,” he outlined.

Cllr Clooney agreed that all-day parking is something that needed to be regulated, but a one-way wasn’t the solution. He leads to speeding he asserted. He also maintained that recent road works had hit businesses by as much as fifty per cent.

Cllr King begged to differ. He cited the heavy traffic with all the extra trucks for Glanbia and this is leading to delays and congestion. There was all-day parking along the street as people are car-pooling to get to work. Circumstances are always changing he maintained, suggesting that at some stage in the future the Main Street in Portlaoise would be eventually pedestrianised.

“One way or another a one-way won’t solve any of that, the facts are plain to be seen and it will only lead to speeding. Draw down the old plan and have a by-pass of Durrow for the lorries if you want,” he countered, as the motion failed to get a seconder.

Cllr Clooney also called on the roads department to extend the tarmacadam road surface to service the existing houses at Castlewood Lane in Durrow.

This was seconded by Cllr James Kelly.