Any future development, housing or investment in a popular Laois village is at a standstill due to a bizarre problem over the status of a sanitary services pump house.

The issue has dragged on for over a decade but has come to a head once again as residents in one estate insist that their locality is ready to be taken-in-charge by the local authority.

The residents of Graigavern Lodge in Ballybrittas maintain they should not be held to ransom or the entire village suffer over the stand-off between the Council and the original developers of the estate, LBJ Developments, who are no longer in business.

While the original grant of planning permission to LBJ dates back as far as February 2005 the development was subsequently taken over in 2007 and a second phase completed to 97 houses in total by another company, Boderg Developments.

Back in 2006 purchasers queued up to buy the first phase of the new homes in Ballybrittas. Most recently a 4-bed property on the estate was on the market for €350,000.

Everyone agrees and there is no dispute whatsoever that Boderg did the business and the houses are constructed and finished to the highest standards and specifications as set down in all planning criteria and that today the estate is exemplary in its maintenance and presentation by all concerned.

Graigavern is ready to be taken-in-charge and normally it would be. However, the snag remains the pump house.

It not only serves the Graigavern Estate but also has redundant capacity to cater for significant further development in the area whether it be housing, business or enterprise.

It also offers the possibility of solving legacy issues for over 40 existing homes and premises in the village who have been awaiting a new sewerage system for years and who are currently operating off old septic tanks.

But what should be a win win situation for the Graigavern residents and the village were the Council to move and take the estate in charge, along with its pump house, is stalled in a festering dispute over the pump house.

Representatives acting for the original LBJ Developers, now trading as JBL Partnerships, are demanding that they be reimbursed for the outlay and additional cost burden imposed upon them to provide the state-of-the-art pump house with the increased capacity to cater for any future development.

That’s when the pause button on the taking-in-charge of Graigavern Estate was hit and due to the stalemate the residents, who have paid handsomely to provide their own homes, have been left in limbo, as is the entire village of Ballybrittas.

The background is outlined in a thorough and well researched correspondence from the Graigavern Lodge Residents Association to the Planning Department in the Council urging them to take the estate in charge. Therein they also note growing concerns over the ongoing operation and maintenance of the pump house. 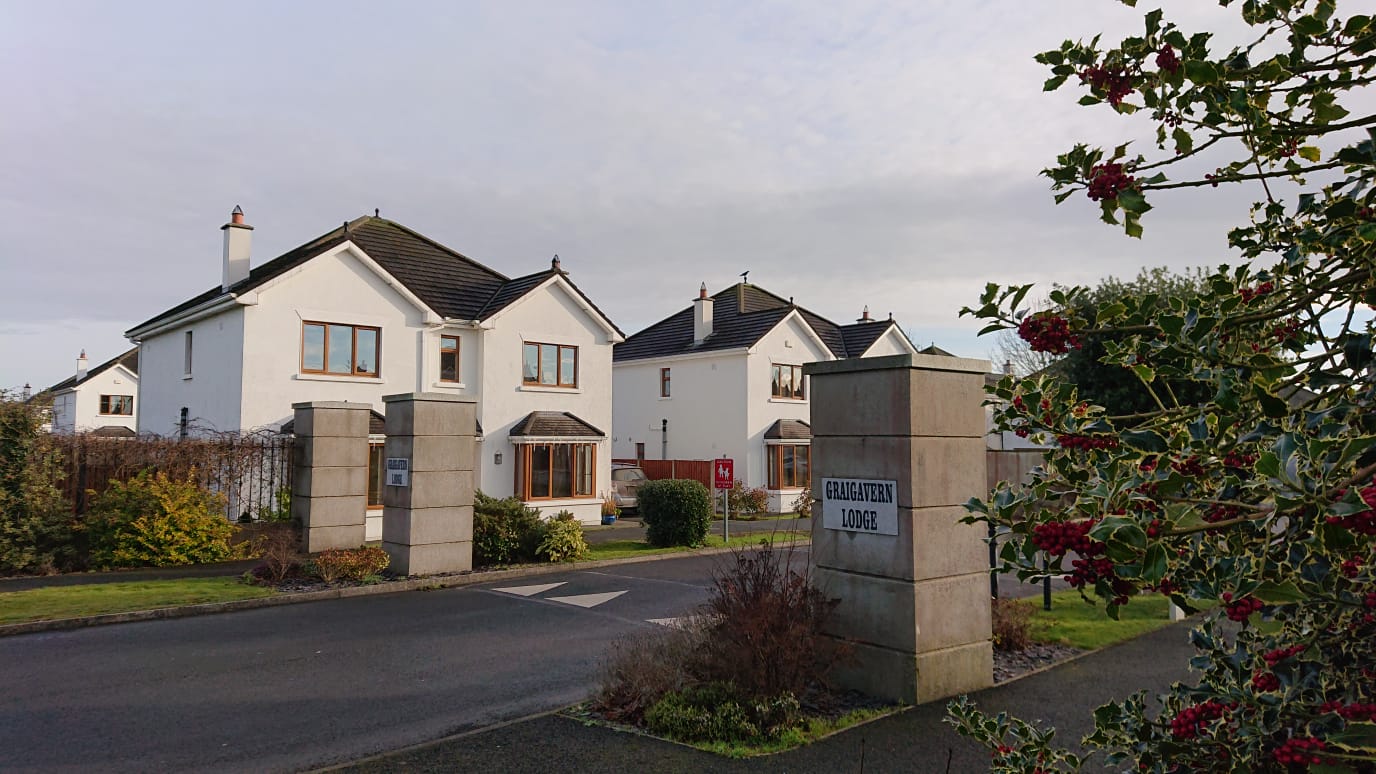 Initial correspondence from the local authority planning department was positive and seemed inclined to acceding to the request to take-in-charge the estate once the residents complied with all the requisite criteria, which they have.

However, the pump house is the fly-in-the-ointment and the competing claims and dispute over its status and who should benefit from its future use has muddied the waters. Legal advice has been sought by the local authority and meanwhile the residents through no fault of their own are stuck in the middle.

Planning condition for pump house dates back to 2005

The dispute centres on a planning condition imposed as far back as 2005 as set out in the comprehensive correspondence from the Graigavern Residents Association to the Council.

“A Planning Report from Water Services was issued on the 4th of February,2005 in respect of condition 17.

“Under the paragraph entitled ‘Foul Sewer’ it states as follows in respect of the provision of a main pumping station within the development:

‘Should development commences prior to the availability of access to a main sewerage system in Ballybrittas then the developer shall install a main pumping station and rising main to Killenard. The design and implementation of the proposed Pumping Station and rising main shall be to the full satisfaction of Laois County Council and the Consultants retained by Laois County Council to progress the orderly development of Ballybrittas (emphasis added). The developer shall fully fund the provision of this facility. Following the establishment of associated costs, Laois County Council will enter into an agreement to levy other developments connecting to this infrastructure and make appropriate remittances as they arise. Should the development commence following the provision by others of a main sewer in Ballybrittas then a special levy representing the proportion by others of a main sewer which is attributable to this development shall apply.’

And therein lies the crux of the matter, the basis of an agreement, or at least an understanding, between the then developers and the Council.

The Residents’ Association letter continues: “Following on from this report and in accordance with Condition 17, LBJ Developments constructed and installed a main pumping station and rising main to Killenard that was designed to service not only the Estate, but also the surrounding environs of Ballybrittas to ensure that proper infrastructure would be available to allow for the future development of the area.

“Thereafter, a second phase of development of the site located at Tullaghan, Ballybrittas, Co Laois was undertaken by Boderg Developments Limited in 2007 to construct an additional 23 dwelling units in compliance with An Bord Pleanála Reference Number PL 11 220349.

“Since the 18th of December, 2009 the status of LBJ Developments is listed as ‘Dissolved’ on the Companies Registration Office website.

“It is our understanding that the main pumping station within the estate has not been maintained or adequately serviced for some time and that as a result, is not functioning appropriately.

“The home owners within the Estate are extremely concerned that at some time in the not-to-distant future the pumping station may cease to operate, resulting in a situation where the sewage within the Estate is not being managed effectively, potentially posing a major health and safety risk to all the residents of the Estate.

“Failure by Laois Council to take the main pumping station ‘in charge’ at the earliest opportunity is likely to result in increased future expense to the Council as the pumping station falls into further disrepair.

“We confirm that at a recent meeting of the Residents Association to discuss these issues, local residents residing within the environs of Ballybrittas, but living outside the Estate, joined the meeting to offer their support for our application to have the Estate ‘taken in charge’ by Laois County Council on the basis that they are of the view that the current sewerage systems in the town of Ballyrbrittas are not fit for purpose and they confirmed that frequently when heavy rainfall occurs they have noted that the private septic tanks overflow leading again to major health and safety concerns.

“Furthermore, they are concerned that house prices within the area are devalued at present due to the inadequate waste water infrastructure currently in situ.

“Planning and development of the area has also been affected on the basis that until such time as the main pumping station within the Estate has been ‘taken in charge’ future development of Ballybrittas is effectively curtailed, again due to the inadequate waste water infrastructure.

“The town of Ballybrittas would greatly benefit from the main pumping station being ‘taken in charge’ and the local waste management systems being connected to it, thereby ensureing that local sewage is being managed effectively. thus avoiding health and safety issues and allowing for the future development of the area.”

Ballybrittas is at a standstill

Local councillor, Tom Mulhall is on the case and believes that it has parallels with another similar long running dispute in Killenard Lodge where an issue over a water connection to the mains had put residents on a boil water notice 8 years. That impasse took a creative intervention from Director of Services, Simon Walton to resolve and the Ballybrittas stand-off may require something similar.

“The situation in Ballybrittas is coming to a head and will have to be solved shortly. This issue goes back to 2005 when the developers at the time did incur additional costs and they did comply with what was requested of them. That pump house has the capacity for over 300 houses and could be of huge benefit to Ballybrittas into the future as well as addressing the issues and problems around sewerage and septic tanks which are ongoing in the village for a long time.

“There would be a significant cost saving if the village could tap in to the existing plant which is just 100 metres away and the possible benefit of income from future developments.

“There is land opposite the estate zoned for enterprise and there is the possibility of more houses due to the proximity to the motorway and the train station in Port’, it’s a no brainer. In fairness the existing management team have inherited this situation and I will be pressing them hard to find a solution and that can only be achieved through constructive discussions and not by going the legal route.

“As of now Ballybrittas is at a standstill and it has wonderful potential for further growth and development, but I fully understand everyone’s frustration that this has dragged on for so long. It’s time we found a solution,” maintains Cllr Mulhall, who is only too familiar with the whole scenario.

One person who certainly hopes so is Graigavern resident and mother of three young children, Deirdre Nolan-O’ Grady, who is active in the residents association and has brought her own legal training as a solicitor to bear in trying to get the whole thing sorted once and for all.

“This is so important for the entire community. These are all young families which children going to the local schools. I’m concerned for the future of Ballybrittas and its development potential if the issue is not resolved. We are disappointed that a dispute over the pump house is still delaying the taking-in-charge of our estate.

“We are being held to ransom and caught up in a dispute, not of our making and about which there is nothing we can do and it’s so unfair on the residents here and the rest of the community in Ballybrittas. Many of us have children going to the local schools in Rath, Killenard and Emo and this is important for the future of the area. But as of now we are caught in a dispute not of our making and it needs to be sorted.”

The ball is back in the Council’s court.

SEE ALSO –  Check out all our 2020 General Election coverage here