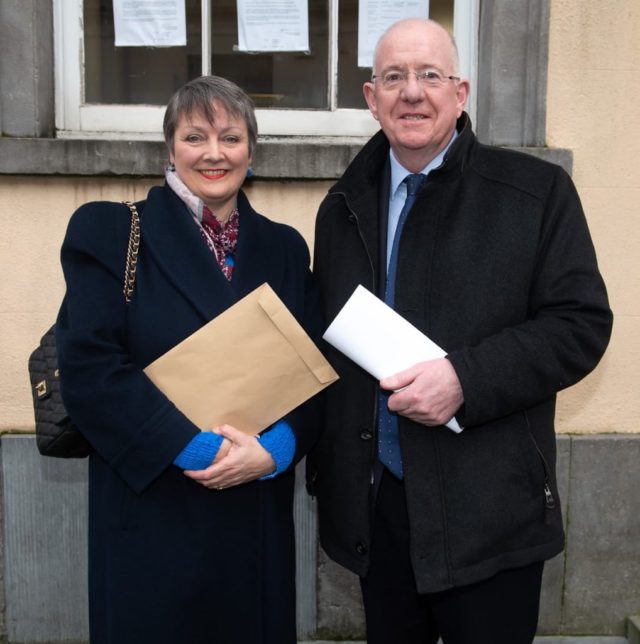 The Fine Gael faithful from across the Laois-Offaly constituency turned out in large numbers in Mountmellick last night as the party launched their General Election campaign and rallied the troops ahead of polling day on Saturday, February 8.

Minister Charlie Flanagan was joined by Marcella Corcoran-Kennedy, his Dáil colleague of the past nine years, as more than 150 party members, including past and present elected representatives, crammed into the upstairs meeting room.

The meeting was chaired by constituency chairperson Vivienne Phelan and addressed by Tipperary councillor Peter Ryan from Thurles who drew a standing ovation from the crowd after telling his own remarkable story of how he lost his sight almost entirely in his early 20s before becoming a Paralympian.

He was elected to Tipperary County Council at the last Local Elections. The party’s Director of Elections in Laois-Offaly Gerry Shinners was also in attendance.

Minister Flanagan was in the glare of the national spotlight in recent weeks in relation to the eventually aborted commemoration for the RIC but he pointed to his and his party’s record in a wide range of areas over their nine years in Government.

Stabilising the economy, keeping a steady hand at the tiller during the Brexit negotiations and his own role in modernising An Garda Síochána were among his key points.

“Our story is good in Fine Gael,” he said ahead of what will be his ninth General Election campaign since he first successfully contested for a seat in 1987.

“We’ve managed to protect our economic gains after the disastrous acute financial crisis.

“We’ve managed to protect the gains of the Good Friday agreement by avoiding a hard border and doing everything we said we’d do on Brexit.

“We balanced the books over the last four years. We now have money to invest in schools, in hospitals, in homes. We’re employing more nurses, more teachers, more Gardai in my area.

Acknowledging the country has dificulties in housing and health and in his own justice department, he said that his party “are working towards a plan”.

“I think the important issue we must put to the people is to allow us complete our plan because when we look across at the Fianna Fáil front bench do we know who they are?

“But that’s what we have and this is the message we must convey at the doorsteps.”

Minister Flanagan also touched on the Fine Gael plan on climate action, saying it is “practical, doable and ambitious” and hit out at the Green Party, who he says “would take us over a cliff edge, particularly here in a rural constituency like Laois-Offaly”.

Fine Gael’s close relationship with a couple of key figures in the European Union was highlighted by Flanagan in his speech.

“If there is one thing that we have in Fine Gael that other parties don’t have when it comes to international relationships … is that we are a member of the European People’s Party family. That stood us in very good stead over the last three years and it will during the next three or four years.

“European commissioner Phil Hogan and 13 other European Commissioners, all of whom were members of the Fine Gael family in the EPP. People like Donald Tusk, Michel Barnier, people like Jean Claude Juncker.

“They in effect are Fine Gael people that we could pick up the phone at any time and talk to them. We could get them to lend their listening ear to our unique and special problems in Ireland. And that job is not yet done.

“A vote for Fianna Fail, a vote for any other party is a vote for a rag bag group within Europe that doesn’t have any idea of the problems facing Ireland or the challenges, much less lending us a sympathetic ear.”

Flanagan devoted a signficant chunk of his address to his record as Minister for Justice, and in particular the reform of An Garda Síochána.

Hitting out at Fianna Fáil for closing the Garda Training College in Templemore during their last term in power, he said it’s his aim to continue to strengthen the force.

“There were mothballs in Templemore,” he said.

“In fact it was reported that Templemore was going to be closed in its entireity until we opened it four years ago.

“And the reason we need civilians is in order to free up the Gaurds to do work out on the beat and out on the street rather than engaged in desk duties.”

“Our chance is to defy the opinion polls,” he added. “Defy the naysayers.

“We know what other parties have done to our country, giving rise to the catastrophic economic collapse of a decade ago.

“I’m asking Irish people to return Fine Gael to government in order to ensure our programme, brought in four years ago and being revitalised now.

“Ensure Irish people – young and old, urban and rural, farm and town – can be united in one thing and that is they will have a Government that will serve their interest rather than serving anybody else’s.”

‘We want a third term’ – Corcoran-Kennedy

Marcella Corcoran-Kennedy, having first been elected in 2011 and going for a third election success, said Fine Gael “want a third term in power” to “continue the good work done”.

“There would have been no money if we didn’t get it from the IMF,” she said recalling the party’s early days in Government in 2011. “Power meant solving the problem. And we solved the problem. Fianna Fáil and The Greens broke it and we fixed it.

“Leo Varadkar has had two years as Taoiseach and he has done us proud, just as Enda Kenny did before him. We have fantastic talent at the top and they deserve and the country deserves for us now to invest after all the difficult work and the suffering that the people have had.

“It is absolutely vital for this country that we are returned to office to continue the good work.”

She hit out at Fianna Fáil for their lack of policies and said that Brexit had it been left in the hands of Micheal Martin “would have been an utter disaster”.

“We are only half way through the Brexit journey and we must be returned so we can negotiate this treacherous time.

“Fianna Fail have no policies. Ours are tried, tested and costed – and we need to keep our country on a stable footing.”

The ongoing negativity, particularly on social media, was addressed by Corcoran-Kennedy.

“But I can tell you the trolls on social media won’t stop me and they won’t stop Charlie Flanagan there who has been targetted massively.”

Pointing to Fine Gael’s record, she said the party “have taken the hard decisions in the past and we will do it again.”.