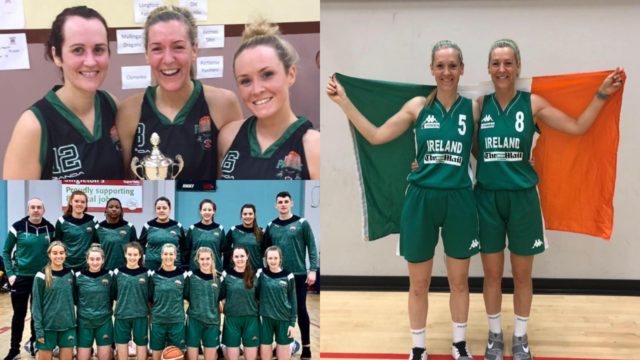 Portlaoise Panthers have a big weekend and the Senior women are up next in tomorrow’s final.

They take on Trinity Meteors at 1:30pm in the National Basketball Arena in Tallaght and they will be lead by their captain Deirdre Tomlinson.

Deirdre has had a massive presence in the team and in the Portlaoise club for many years and is a brilliant role model for future players both on the basketball court and on the football field where she plays with her club Bennekerry Tinryland and Carlow ladies footballer.

On the basketball court Deirdre has played in Carlow with The Dolmenettes, Kilkenny, Tipperary and Midland local leagues, National Leagues and Super leagues and represented Ireland last summer.

It is no wonder she has the honour of captaining this brilliant team.

In Carlow, I really looked up to Lorraine Stynes (Broderick) and Orla Nolan (McFarland) when I was starting out. I was in awe of these two and just loved watching them play.

When I started playing with Portlaoise Panthers, Catherine O’Sullivan was a player who just stood out. She is so skillful, a patient teacher and her ability to read a game and adjust so easily really blew me away.

What made you want to get into basketball?

I moved primary school and everyone in my new school played so I had no choice thankfully as it happens!!

I started playing for my local basketball club, The Dolmenettes in Carlow. We entered the Carlow and Kilkenny leagues and had great success.

There was a fall off after a few years and myself, my sister Gráinne and our friend Aine Kelly were asked to joined a Kilkenny/Tipperary team who played in a Tipperary League. After that, Aine was in college with a girl from Portlaoise who said there were teams looking for players for a midlands league so the three of us decided to give it a go and I’ve been here ever since!

What is your earliest memory of basketball?

Training after school on outdoor courts and playing 1 on 1 with my twin sister for hours on end in our back yard.

Winning back-to-back Cup titles in 2014/15 and 2015/16 season, playing for Ireland in the European Championships in Finland last summer and captaining Portlaoise Panthers this year!

The first time we ever beat Tralee Imperials in Tralee as at the time they were an excellent outfit.

The final whistle in the Arena when we won our first Cup. The atmosphere was unreal, the panthers supporters lifted the roof and the elation as we ran out onto the floor was unforgettable.

What does basketball/sport mean to you?

Sports in general means a huge deal to me. When I think about the friendships I’ve made over the years and the friends I have, 95% of them are due to sport. It’s like a ready made family who all share the same interest. I can’t imagine not having that common interest with people!?

Also, being apart of a team or participating in sport growing up teaches you so much. There’s highs but there’s plenty of lows and it teaches you to relish the wins, handle defeat and learn how to deal with disappointment. And then pick yourself up and go again.

I travel from Carlow to Portlaoise three times a week for the past 20 years. It’s just so normal now I don’t think about it. During the National League, you don’t have a weekend off from September to March.

You could be in Donegal, Castleisland, Galway or Belfast. I’ve been asked by my best friend to be godmother to her son and I feel so bad I can’t give them a free date for the christening till after the league!!

Any advice for young girls thinking of starting out?

Play something! It’ll stand to you in so many ways. It’s a bit of a cliche to say it’s character building but the fact is, it is just that. You really do push yourself and discover your strengths and weaknesses, elation and devastation and all the bits in between.

I coach the U-12’s girls football team in my local club, Bennekerry Tinryland. I always see the drop off from U-12 to U-14 and then up to U-16. I find the majority of it is when girls believe they’re just not good enough at it. Some try another sport. Most just stop playing altogether.

So I would say to them, don’t look at the best players, compare your level of skill and decide you’re way off the mark and throw in the towel. You just chip away at your pace, kick a football off a wall in the evening until if just feels right, dribble around the yard with your weaker hand, shoot the same shot 100 times.

Your ability will increase and that naturally pulls your confidence up and the more you improve, the more motivated you’ll become and you’ll work harder towards the next goal you want to achieve.

What always motivated you to stay competing?

I feel like I know no different. I’m in basketball gear September to March and football gear April to August. I’m sad when the basketball season is over.

Then I go back to football and then I’m sad when the football season is over. I just like playing so that motivates me plenty! I’m also motivated by the players around me. Irish internationals, inter county footballers, all of them set high standards and you have to work hard so as not to be the weak link.

What do you see for the future of basketball and Portlaoise Panthers?

Basketball is an institution in Portlaoise and the Panthers club are at the very heart of that. There’s no heights this club can’t achieve. We’ve already seen so many come through the school system with the great Pat Critchley with Scoil Chríost Rí.

We’ve attracted players from neighboring counties, like Kildare, Westmeath, Dublin and as far away as Galway. Portlaoise Panthers club gives these girls an opportunity to excel at club level against the best in the country. From Kindergarten to Masters level, you can play from 4 years to 40 and beyond at a high competitive level!

Ditzy, friendly and funny (well, I mainly laugh at myself!)

Are you looking forward to this weekend?

I can’t wait for this weekend! Any chance to play in the Arena in an All Ireland final with your friends is going to be huge. The nerves will be through the roof but we’ll channel that nervous energy and adrenaline.

We will will go in as underdogs and we don’t mind that. They have two excellent Americans and the addition of Edel Thorton makes them a super outfit. But for our part, we have a young squad who play with so much heart and are just fearless.

Their attitude, determination and work ethic blows me away every game. It’ll be a nail biter and a game you won’t want to miss.