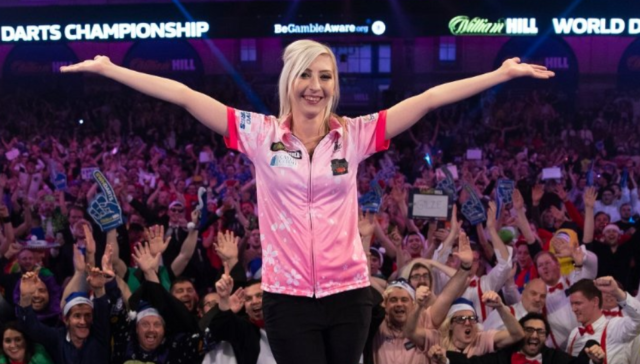 Fallon Sherrock (25) made history last December when she became the first ever female darts player to win a round at the PDC World Darts Championship.

Sherrock knocked out Ted Evetts in the first round to make history.

She didn’t stop there as she went on to beat the world number 12, Mensur Suljovic in the second round.

Despite facing third round defeat to Chris Dobey, Fallon Sherrock has done wonders for the world of darts and sport.

Now you can get a chance to see Fallon Sherrock in action this summer in Portlaoise.

The darts star will be appearing at an event in O’Loughlin’s Hotel in Portlaoise in May.

Tickets for the event are on sale today from 6pm.

If you want to throw against Fallon all you have to do is sell 10 tickets for the event, this guarantees you a game.

All proceeds will go to Laois Hospice.

If you are interested in throwing, register your interest by emailing mustangsportlaoise@gmail.com.