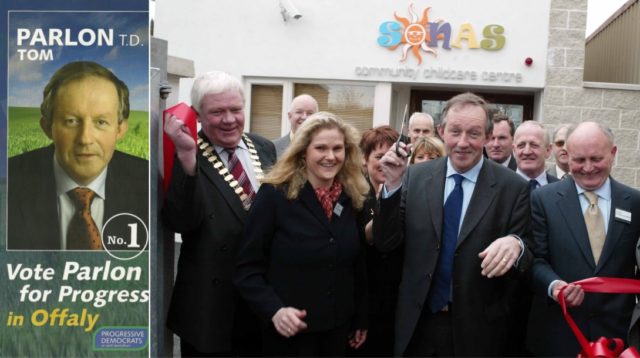 In the spring of 2002 Mary Harney courted farm leader Tom Parlon and won him over.

She wiped the eye of Parlon’s other suitor, Michael Noonan, who she caught napping as the Irish Farmer’s Association President was looking for pastures new as his term at the helm of the IFA was drawing to a close.

It was a great coup for Harney, a good choice by Tom Parlon and coincided with the PD’s last hurrah in government.

An astute, articulate and able operator Parlon’s profile as the highly capable IFA leader gave him a head start in the general election of May 2002.

However, the Coolderry man’s arrival on the scene turbo-charged their campaign and swelled their ranks with farmers, rural supporters and former IFA colleagues, many of them temporarily at least setting aside their previous FG and FF affiliations.

The agri-support base proved crucial and central to Tom Parlon’s ultimate success as it seems the farmers of Laois-Offaly thought they could have their beef-cake and eat it.

His activists even stole the Fianna Fáil slogan and gleefully erected ‘Welcome to Parlon Country’ signs on the approach roads to Portarlington.

Fianna Fáil may have lost their slogan, a reference to their three out of five seat dominance in Laois-Offaly since 1977, but they didn’t lose any of their seats.

Parlon ultimately eat Fine Gael’s lunch, taking a big bite out of the farming vote in Laois. The pound of flesh to pay the price for the Offaly man’s election to Leinster House on his first attempt, was Charlie Flanagan’s.

Tom Parlon was one of eight PD TDs returned in 2002 and he went on to serve as Minister of State at the Department of Finance with responsibility for the OPW, as the Bertie Ahern/Mary Harney FF/PD government was comfortably returned to power. Fianna Fáil won 81 seats.

Charlie Flanagan wasn’t the only one to take the hit as Michael Noonan’s Fine Gael imploded nationally losing 23 seats, with a long list of high profile casualties that included former leader Alan Dukes in Kildare. 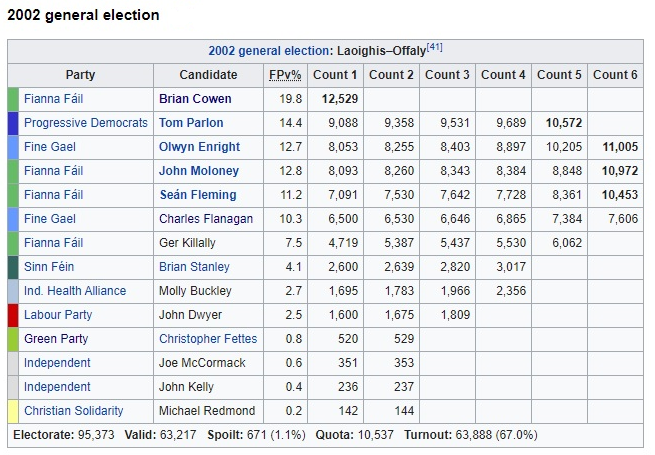 In Laois-Offaly, Olwyn Enright was one of the few success stories for FG as she stepped in to her father’s shoes in the Dáil on her first general election outing.

2002 marked the first signs of the dawning a new era of political flux and fragmentation, and a move away from the traditional Fianna Fáil, Fine Gael, and Labour options.

Sinn Féin’s Brian Stanley signalled his intent in the first of his general elections. He would have to contest two more before finally making his breakthrough in 2011.

Nationally 2002 saw the Greens under Trevor Sargent treble their seats from two to six, while Sinn Féin shot up from one to five as their inexorable rise got underway in earnest. Former Labour leader, Dick Spring lost his seat in Kerry. Embarrassingly, Labour haven’t even a candidate contesting the 2020 election in Kerry.

Tom Parlon’s political career was like the asses gallop, short and sweet.

He was defeated in the next election in 2007 and departed politics for a high profile post with the Construction Industry Federation. The PDs themselves wound up completely in 2009.

For Charlie Flanagan 2007 brought some redemption as he regained his seat which he retained in 2011 and 2016. His father Oliver J was first elected to the Dáil in 1943 and went on to top the poll for most of his unrivalled political career. 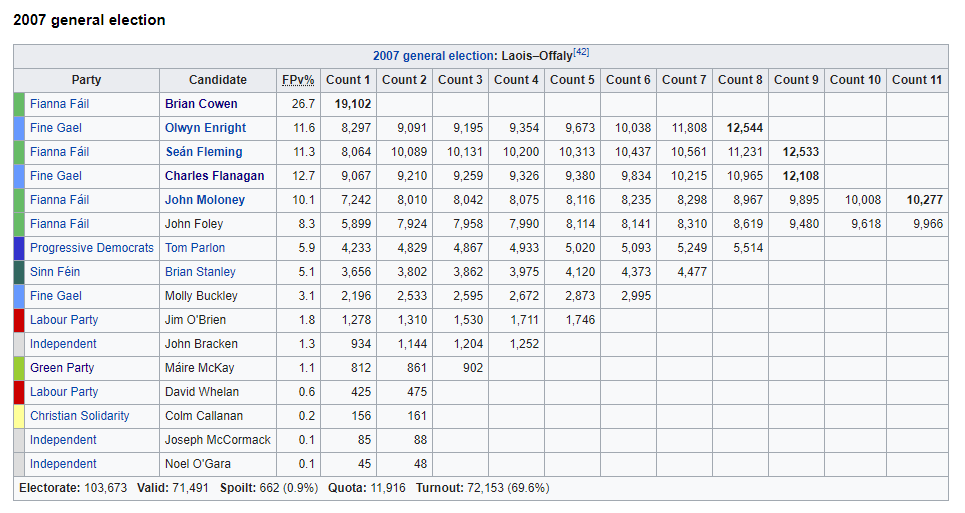