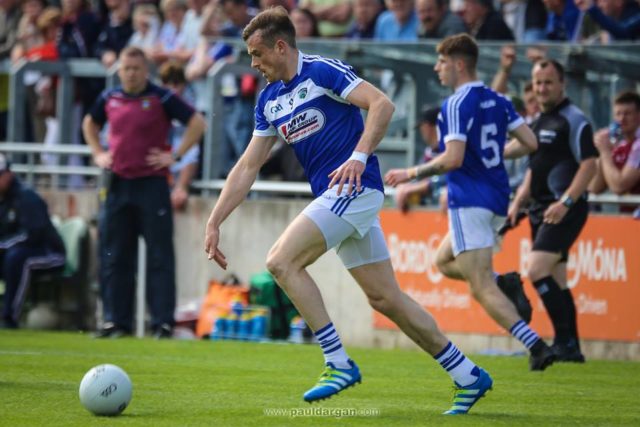 Laois got their league campaign off to a positive start last Sunday as they came back from a six-point deficit to come away with a draw to Roscommon thanks to late goals from Evan O’Carroll and Kieran Lillis.

Speaking after the game, captain Kieran Lillis praised his team for their work in pulling the game back to a tie.

Lillis scored 1-3, including the last-minute goal that earned a draw. Named at full-forward, he played mostly at midfield but did move in and out and benefited from the new mark rule at one stage in the first half.

He said: “It’s a great day to start, it sets our season off on the right foot.

“Outside of our set up not many people gave us a chance of getting anything out of this but we knew ourselves that we had worked hard during the winter as Tom, our strength and condition coach said, our numbers are comparing with any other team.

“It’s just about believing and I think we showed a good bit of belief there when we went six points down to claw in back.”

Laois were trailing by six points in the dying minutes of the game before O’Carroll scored what Lillis described as “unbelievable” and was followed up by the equalizer off the boot of the Portlaoise midfielder.

“Evan competed really well for it and it just bounced in front of me, a few lads fell at my feet and I just had go around them.

“It was one of those ones where I’m just glad I was there to finish it,” he explained.

And Lillis was also thrilled to be recently announced as the new Laois captain.

“It’s great to be picked among the bunch, it’s great to captain this bunch. It’s a massive honour for my family, for my club and a personal honour as well,” he continued.

Laois take on Armagh this Saturday evening at 6pm in MW Hire O’Moore Park. Laois have won the last four meetings between the sides.

Looking ahead, Lillis said: “We have a massive test in six days time so it’s all about recovering well.

“Armagh put up a great score against Cavan so they’ll feel they have a point to prove against Laois teams over the last few years.”

The Laois team named shows one change from the side that drew with Roscommon with Brian Byrne from Graiguecullen coming in for his debut at corner-back in place of his clubmate Trevor Collins.