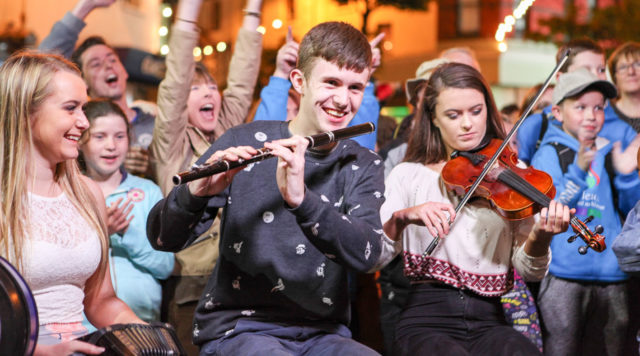 David Vesey, a twenty year old musician and Abbeyleix native has qualified as a finalist for the Sean O’Riada gold medal.

There are 14 other competitors so he will face some stiff competition as he competes in Rochestown Park Hotel in Cork on February 7.

This event will be broadcasted live on RTE Raidió na Gaeltachta which will be available across Ireland to listen to.

David is a student in CIT (Cork School of Music) where he studies music.

In the past he has won an All-Ireland and was a past flutist on the Macalla na hÉireann Comhaltas Tour of Ireland and Britain.

He has a strong background in Traditional Irish Music and plays the flute, whistle and piano.

David is also a classical pianist, studying with Santa Ignace and recently performed with the First Brigade of the Irish Defence Forces.

In 2019, David played at the Ortus Chamber Music Festival in Cork with his chamber group, the Dunamase Piano Trio.

The Sean O’Riada medal will be presented by Peadar O’Riada in Rochestown Park Hotel.

The judges, Michael Tubridy, Mary Bergin and Gary Hastings will have to decide the winner based on their playing proficiency and their musicality and soul.

The winner takes home the Sean O’Riada gold medal as well as €2500.

As part of the weekend events, there will be a musicians conference on Saturday morning in the hotel.

The Coirm Órdha concert with past winners including box player Keelan McGrath and harper Úna Ní Fhlannagáin will take place on Saturday night.

We wish David the very best of luck!