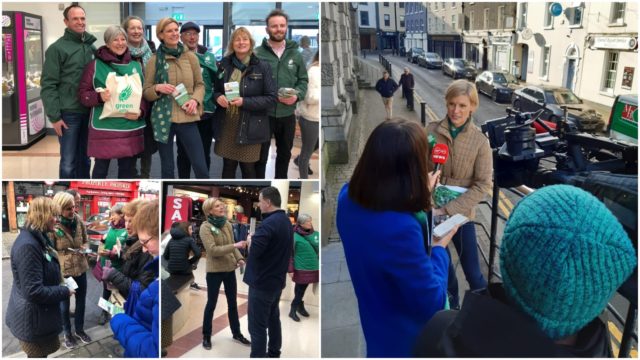 The Green Party have never won a seat in the Laois-Offaly constituency – and Pippa Hackett is trying to create history next weekend by becoming the very first.

Though originally from Mayo, Pippa is well settled in Geashill where she and her husband Mark farm organically on their 200-acre holding.

Now the challenge is to get elected to the Dáil, hoping the Green Wave that was evident in the Local and European Elections will carry through to the Laois-Offaly constituency.

Portarlington is one of their local towns but they haven’t been overly helped by its relocation to the new Kildare South constituency along with Killenard and Ballybrittas.

Pippa and Mark have been heavily involved in the St Michael’s Athletic Club in Portarlington and Laois Athletics.

And that involvement in athletics was more tha evident on Monday of this week when she literally came running through the door just moments before the Green Party launched their Manifesto for Rural Ireland in the Dunamaise Arts Centre.

In a pair of running shorts, Pippa came racing into the room in her bubbly style and addressed the crowd.

The Greens have three TDs at the moment – party leader Eamon Ryan in Dublin Bay South and Catherine Martin in Dublin-Rathdown as well as Joe O’Brien who was successful in the recent Dubin Fingal by-election.

They enjoyed considerable success in the Local and European Elections in May when they had two MEPs elected and quadrupled their number of councillors. They are now enjoying unprecedented representation at local level and further increasing their number of TDs is the obvious next target.

After the hour-long press conference ended, Pippa and her team headed out into Portlaoise for a canvass with the LaoisToday team in toe.

Accompanied by her husband Mark and Green Party MEP Grace O’Sullivan, Pippa made her way down Main Street.

Now we’re talking 3pm on a Monday afternoon in January. It’s bitterly cold so there aren’t that many people about.

And those that are, are trying to go about their business briskly and are somewhat surprised to be stopped for a chat by a person.

Most of the people who come face to face with the canvassers are polite at this stage. They take a leaflet and smile without really committing one way or the other which way they will vote.

The group then make their way under the arch way between Pappas Pizza & Kebab and Bank of Ireland where a busker offers some encouragement.

And we head towards Lyster Square – something else becomes very apparent. 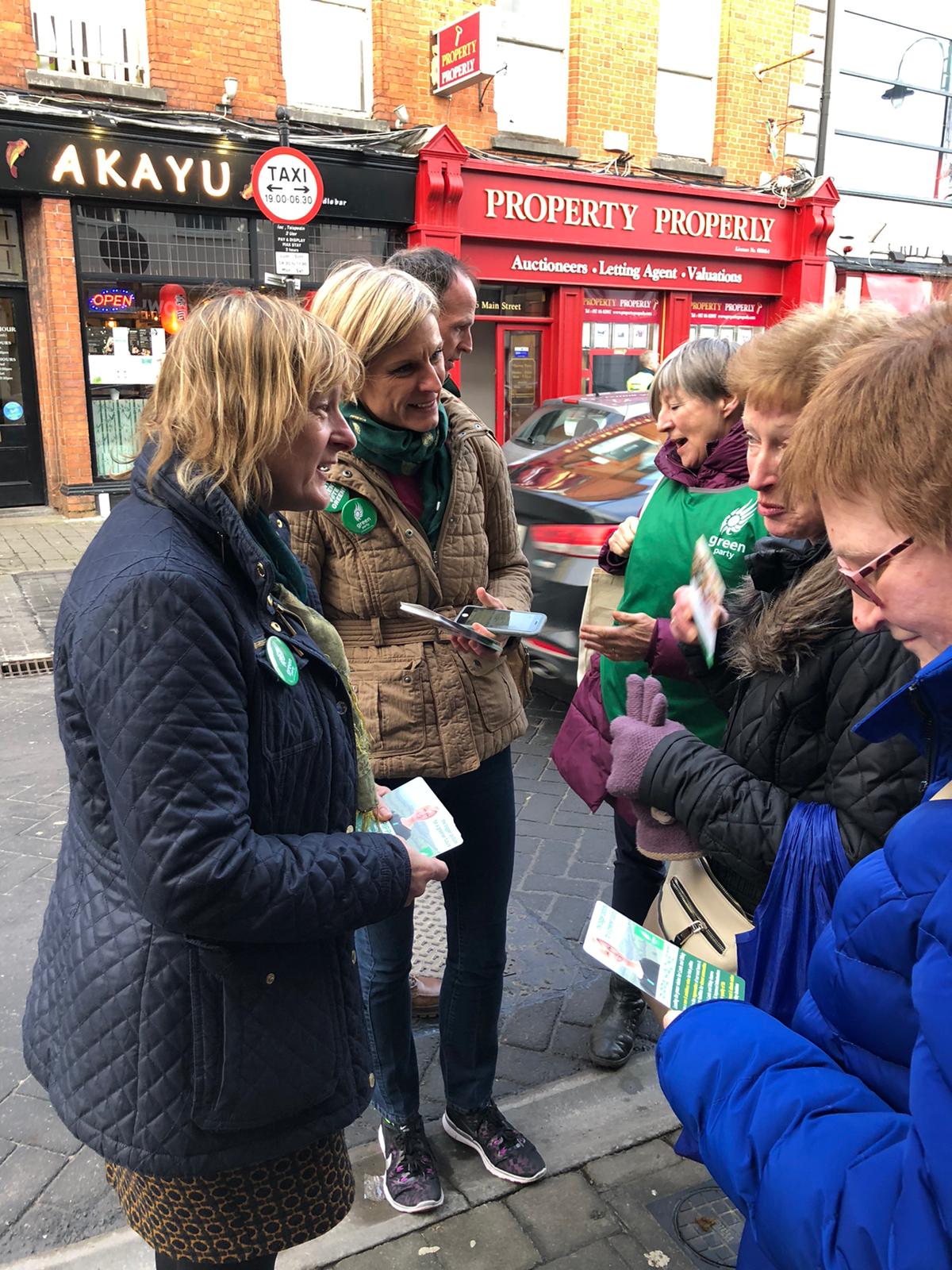 About one in three of the people approached by Pippa’s team say they cannot vote. Most of these are from countries outside of Ireland and say they are not registered.

At the arch between Laois Pharmacy and The Fruit ‘N Nut, a man who was very worried about the climate said that Pippa would have his vote.

He said: “Weather events that we are experiencing here are getting more severe and we really have to start doing something.” 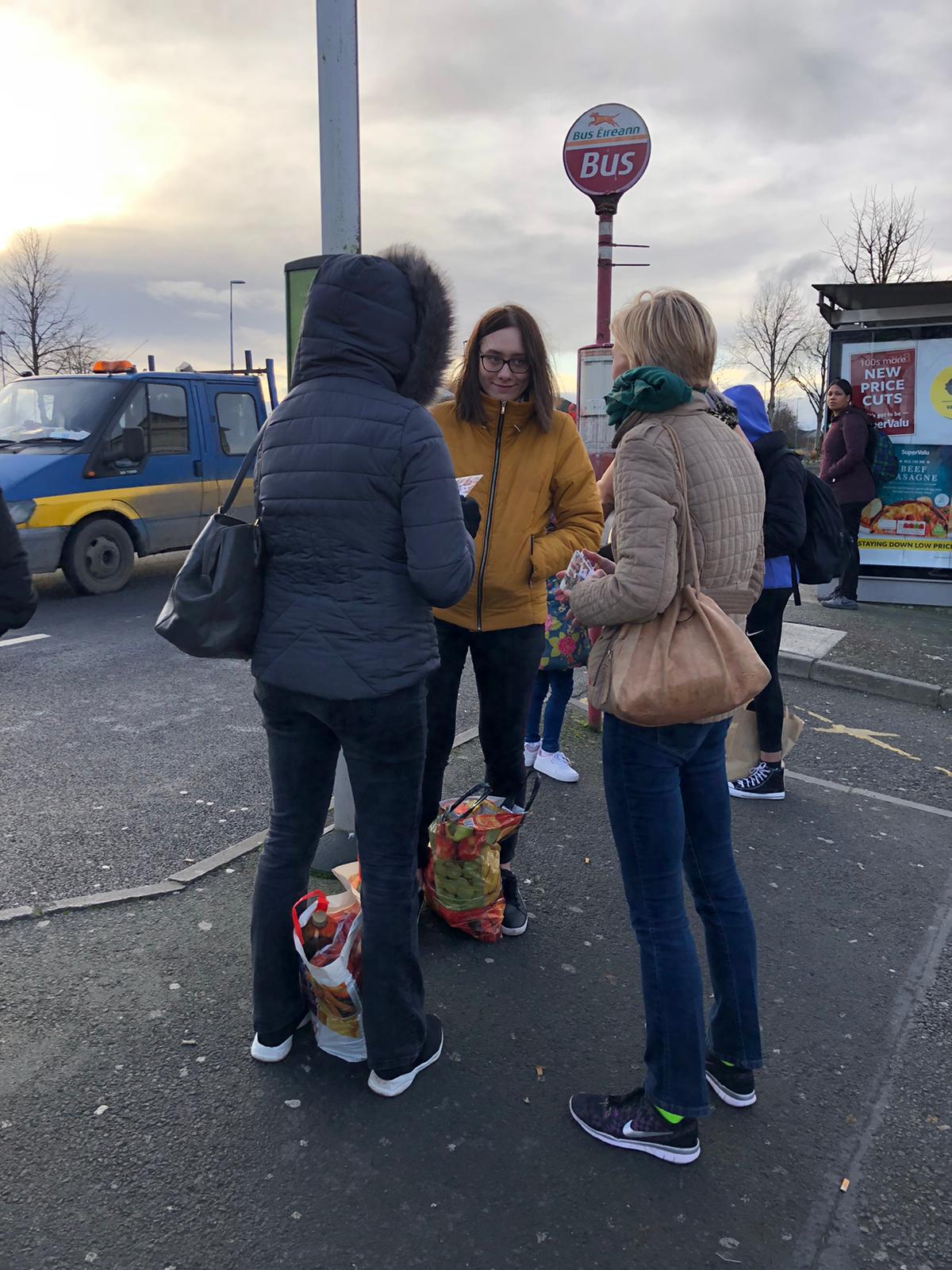 After a brief chat with people waiting to catch a bus, the posse made their way towards the Laois Shopping Centre where yet more leaflets and smiles were handed out.

The Green Party experienced a surge in support in the Local Elections last May.

From 12 seats nationally in 2014, the Green Party surfed on the Green Wave and saw that grow to 49 – including the one that Pippa Hackett won in Offaly. 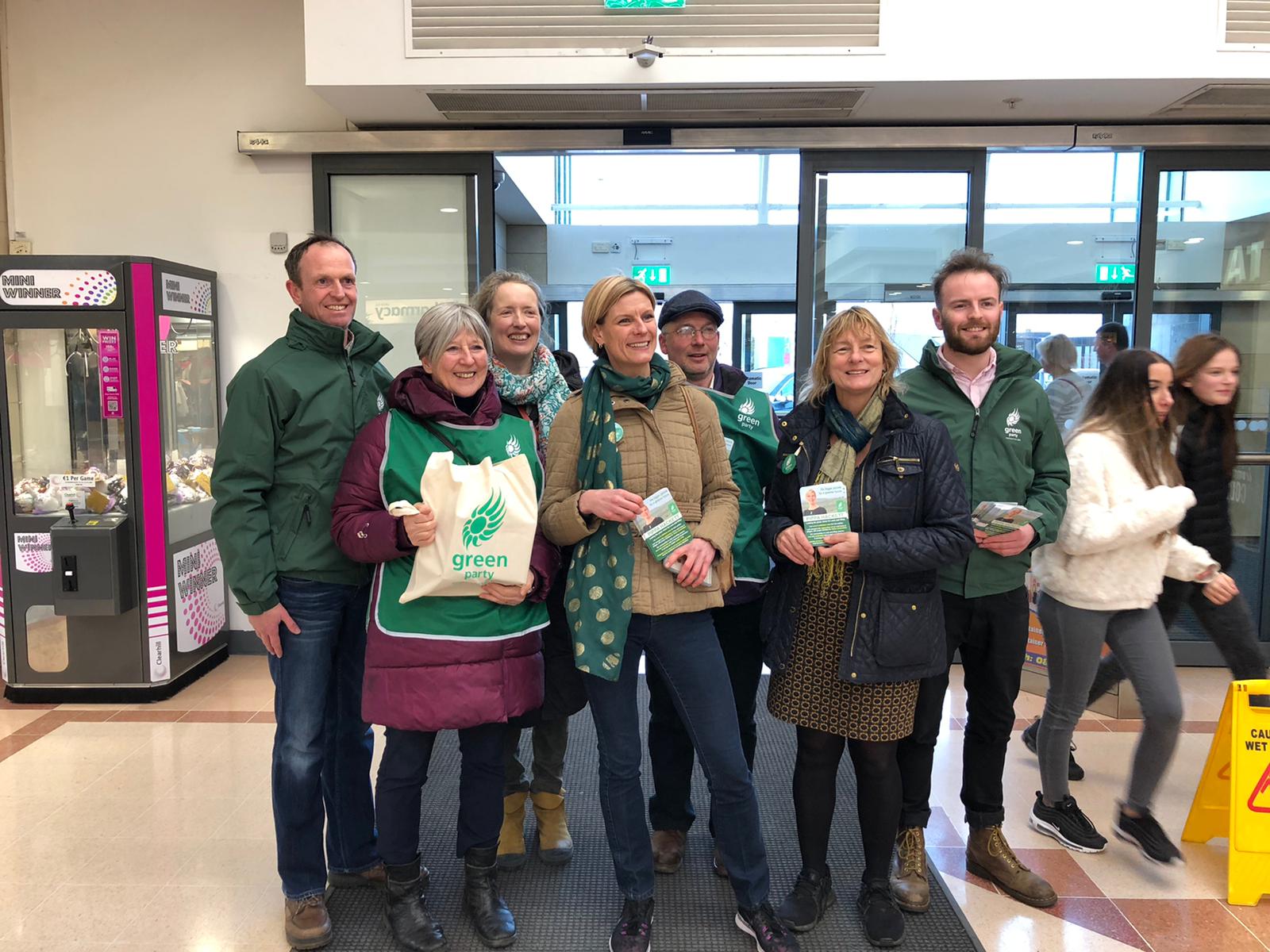 But Laois voters didn’t have a chance to get in on the party as there was no candidate in any of the three areas in Laois – something which Pippa regrets.

She said: “It really was a pity that we didn’t manage to have someone in Laois and have the chance to build that platform.

“It certainly will not be the case when the next Local Election comes around.” 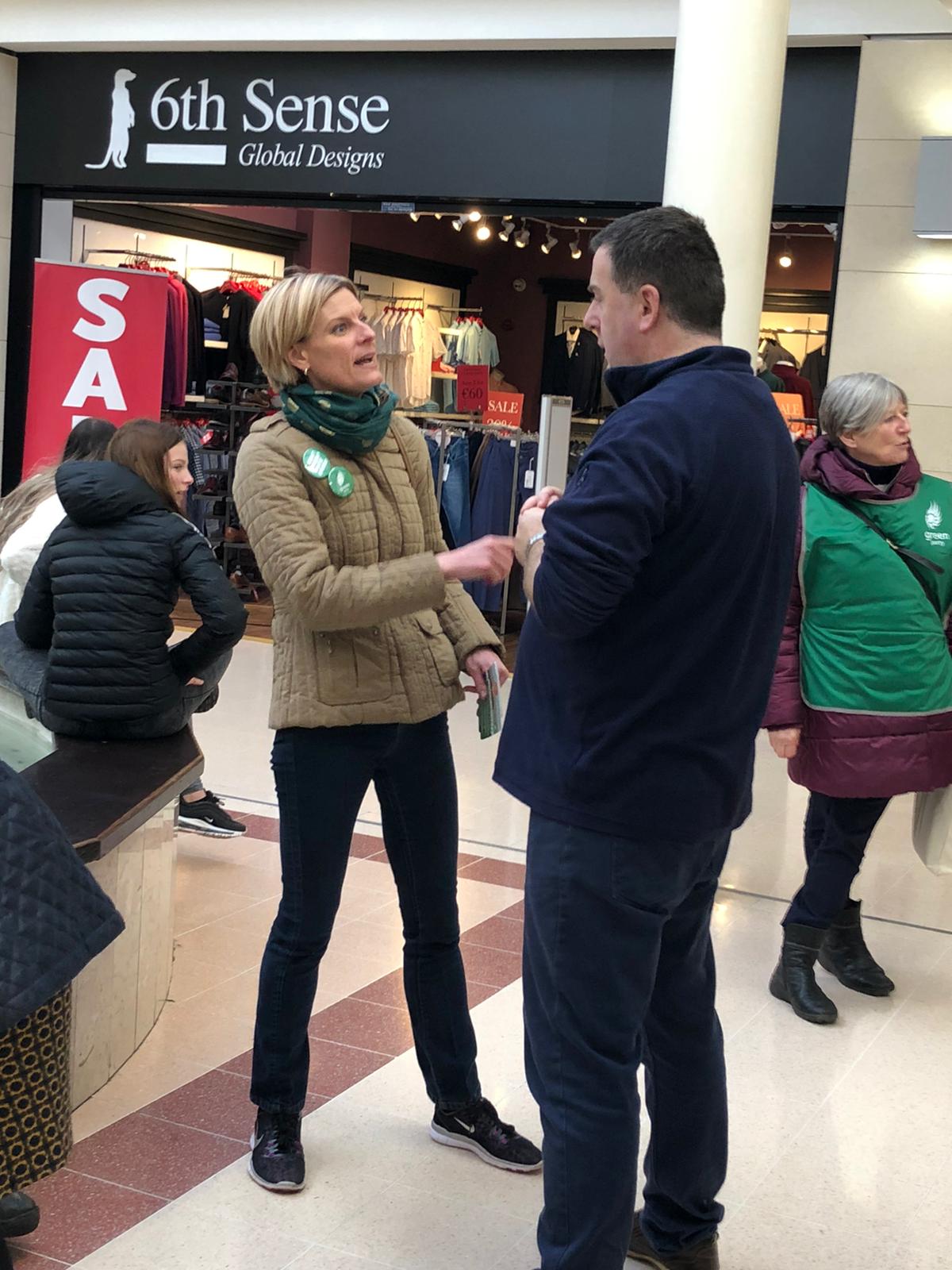 Into Laois Shopping Centre we went, to thankfully get a break from the cold, and it was here that MEP Grace O’Sullivan came into her own.

No shopper was safe as O’Sullivan fired leaflets out left, right and centre – but also managed to have a word with anyone willing to talk.

Questions on what the Green Party would do for nurses and how they view the retention of the A&E Department in Portlaoise Hospital were answered in a seemingly acceptable way by Pippa and her team. 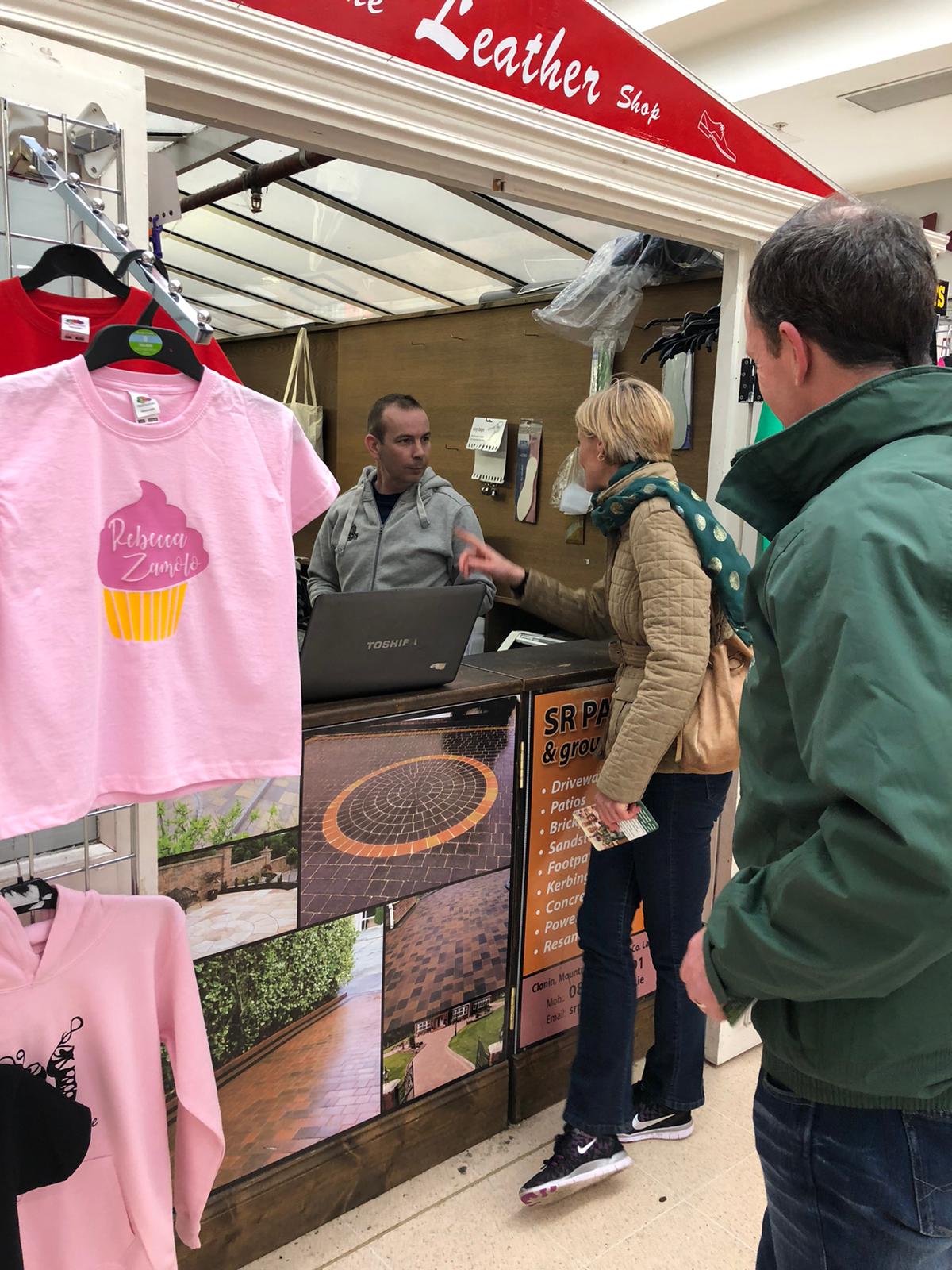 However, their canvass in the Laois Shopping Centre was cut short by security who informed them that no canvassers were permitted in here.

No harm or foul – just a simple mistake so it was back outside into the elements we headed to retrace the journey we had already made.

Sinead Moore ran in the 2016 General Election for the Green Party and was eliminated after the second Count when she won just 4% of the vote. 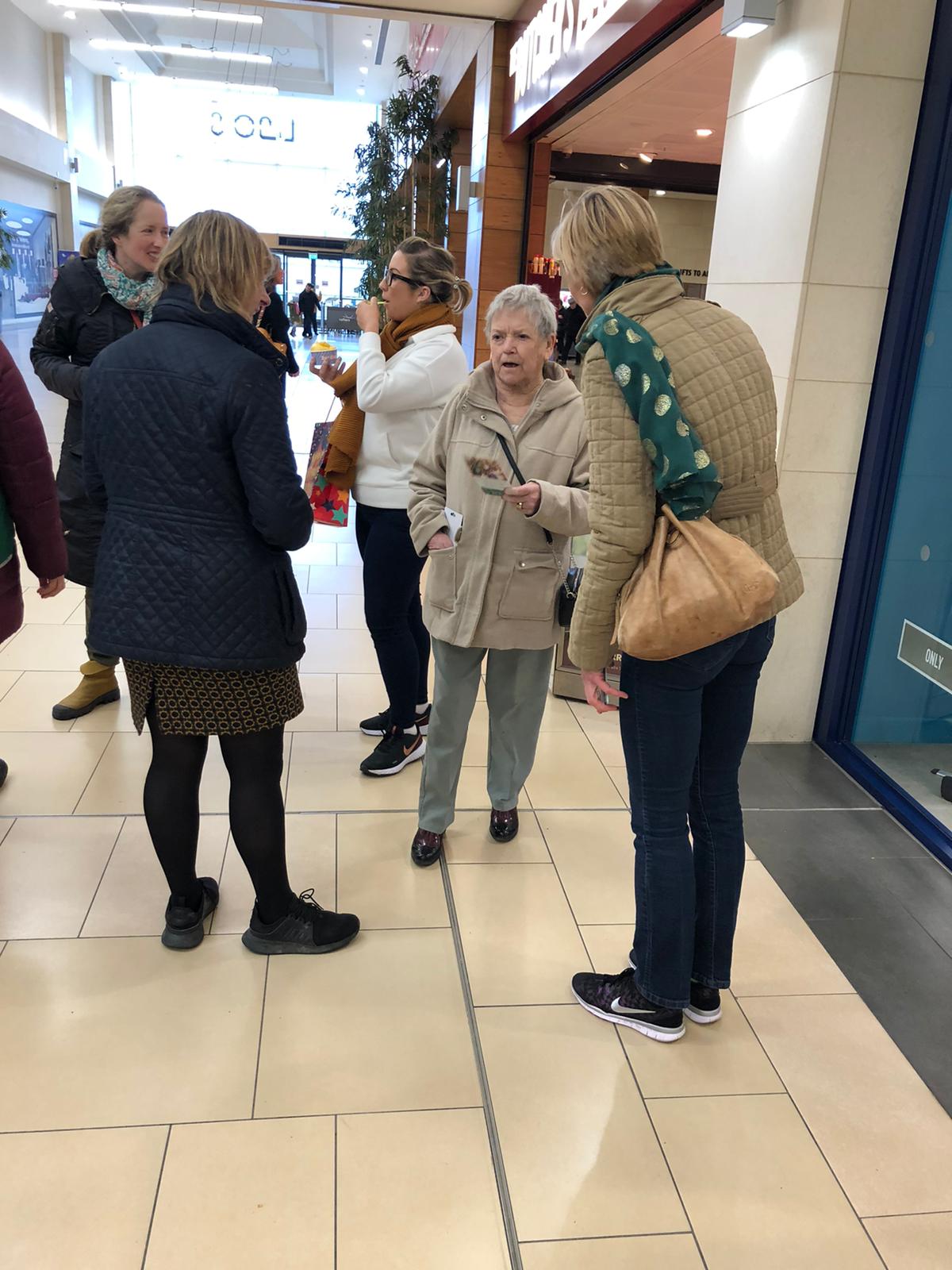 The polls would suggest that Pippa could well double that vote – and she may be in a scrap for the fifth and final seat if the Green Wave from 2019 continues down here. 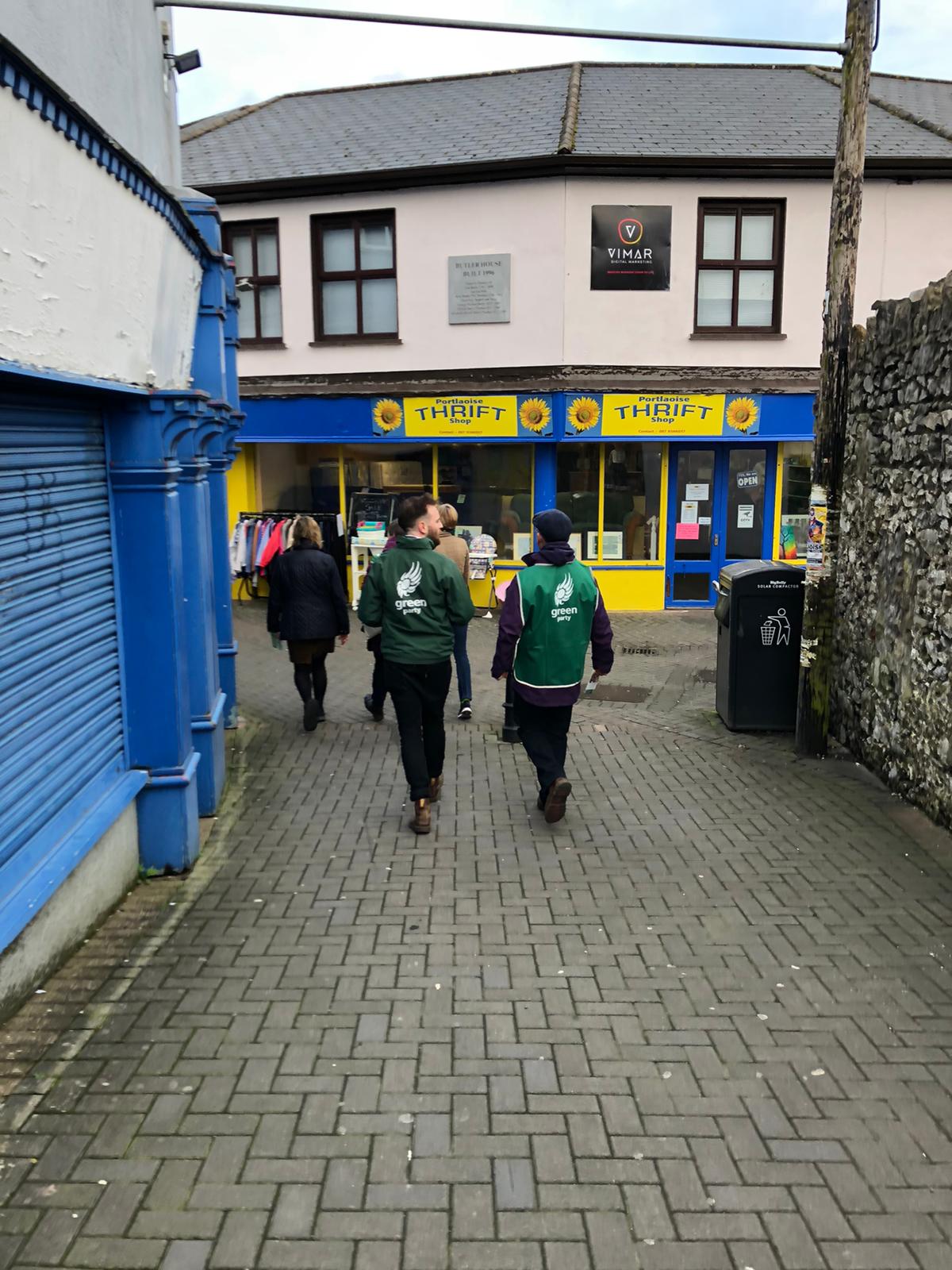 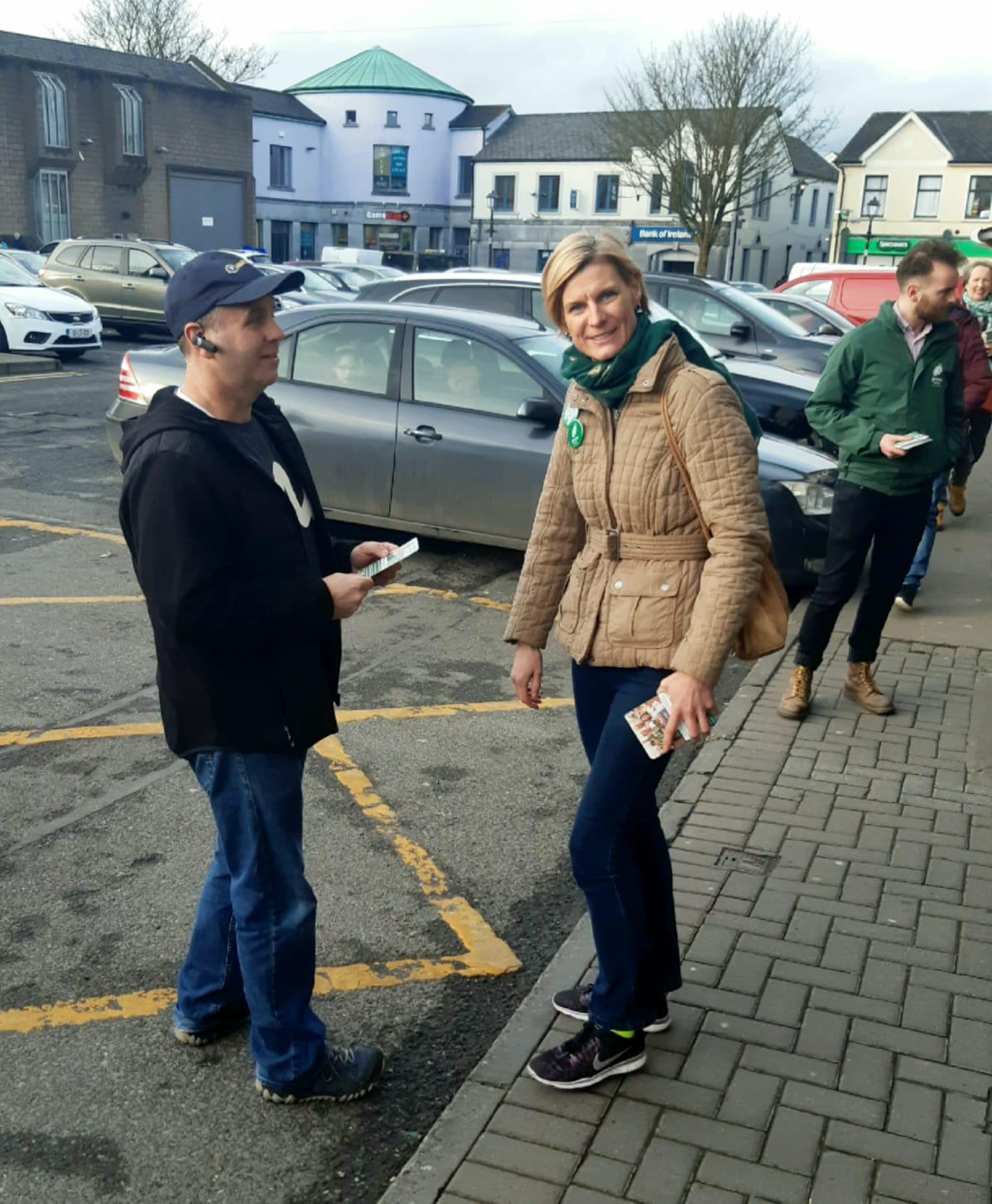 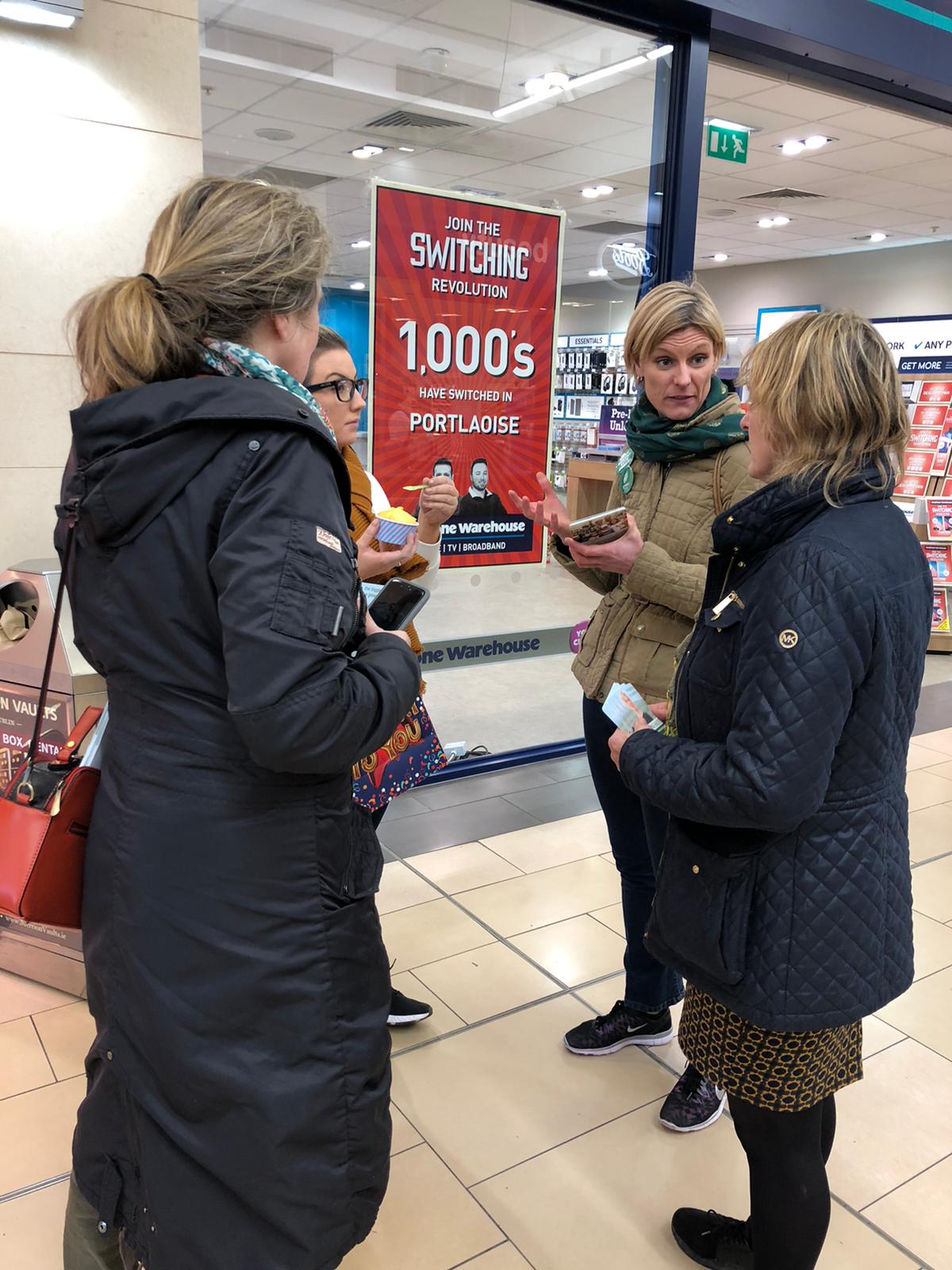 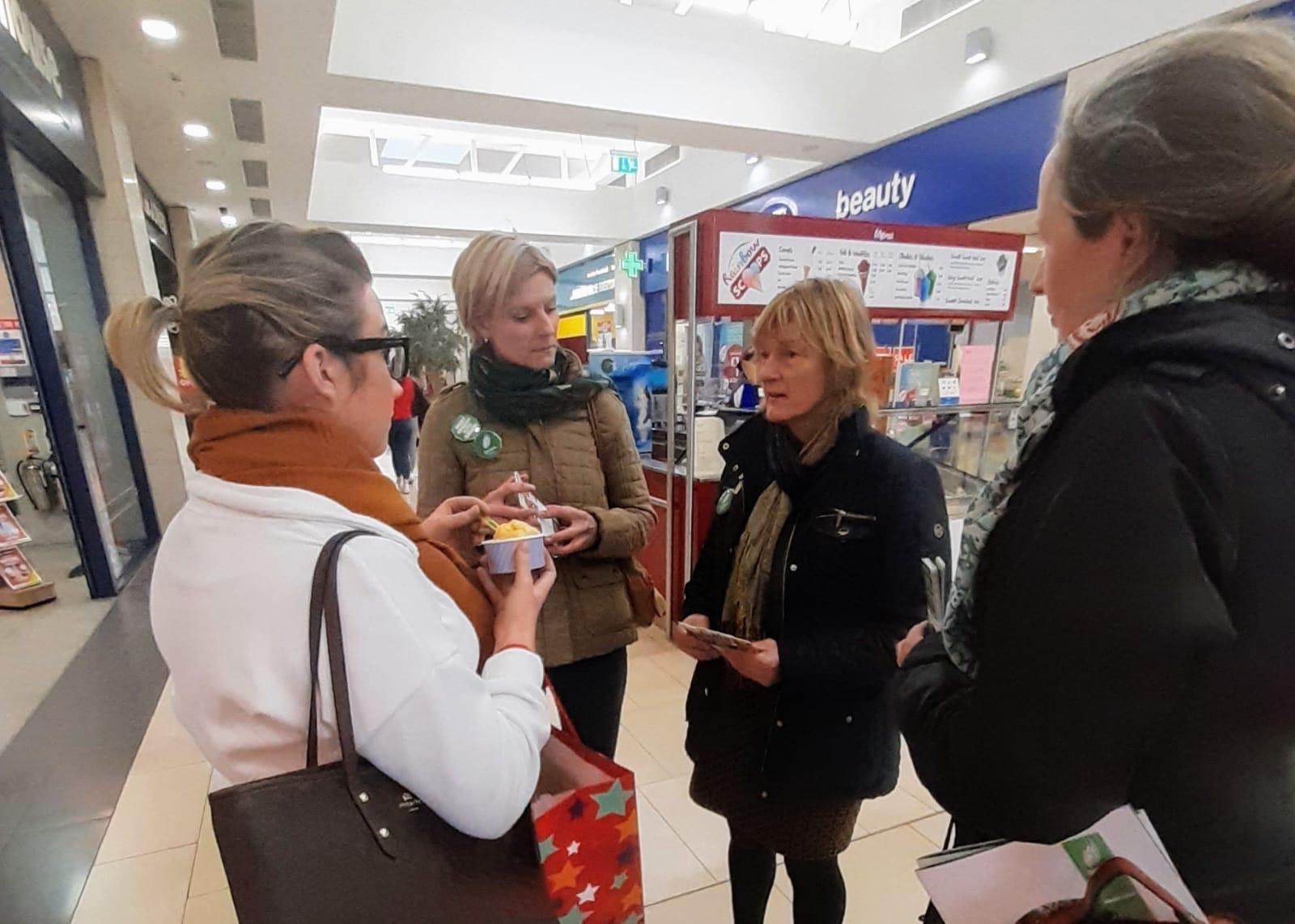 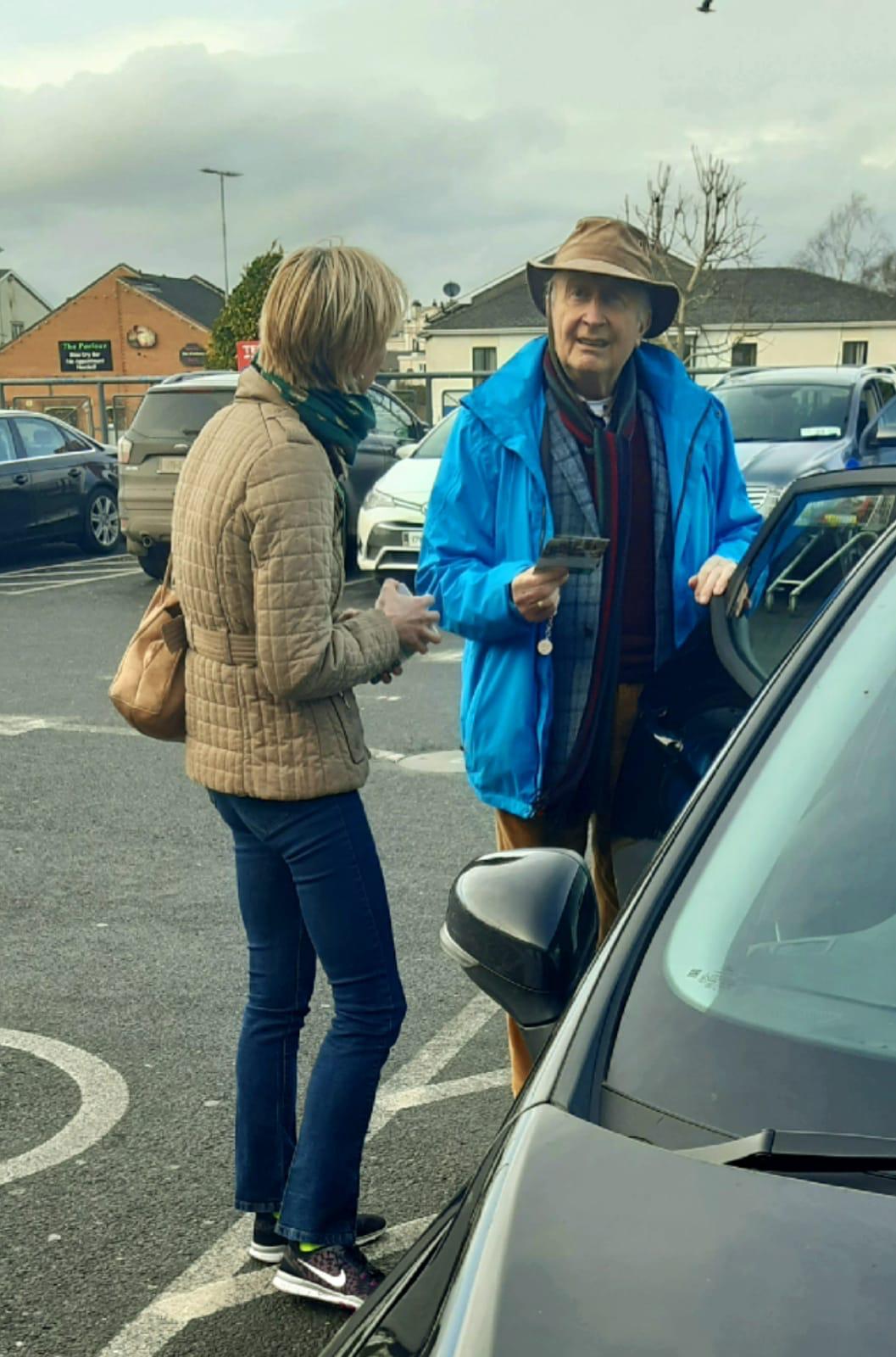 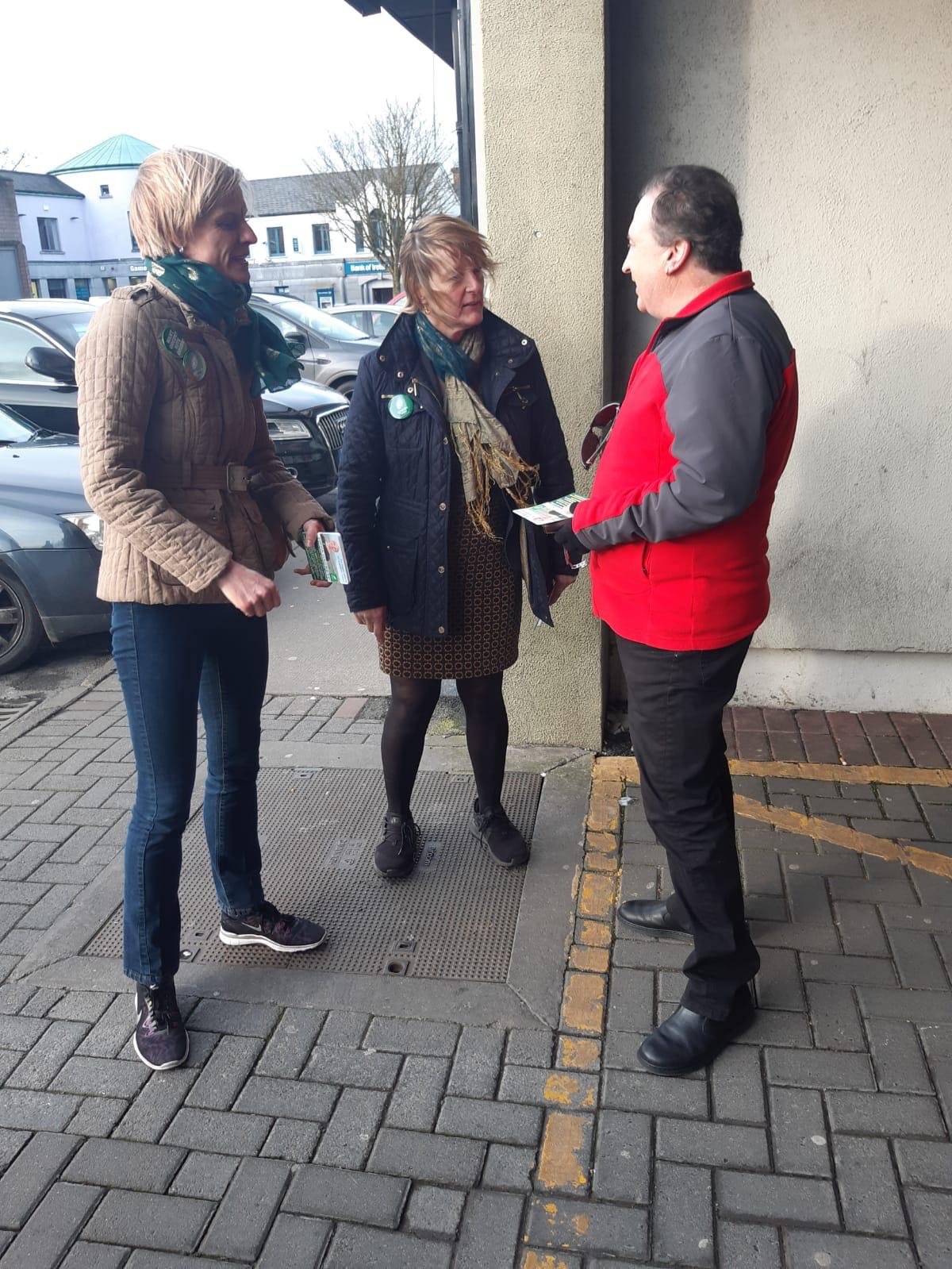 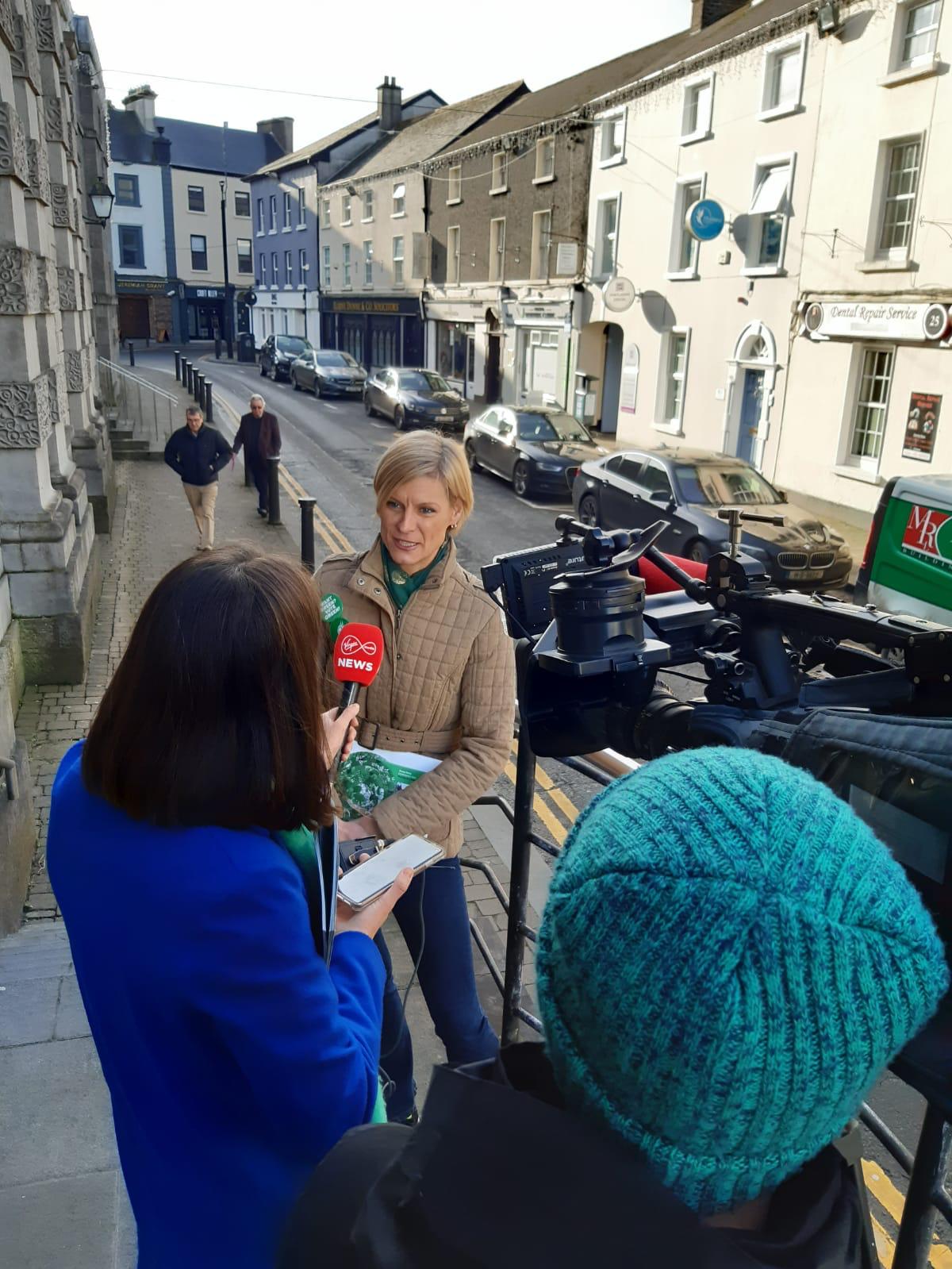 SEE ALSO – On the Canvass: For Seán Fleming’s campaign every day is a school day