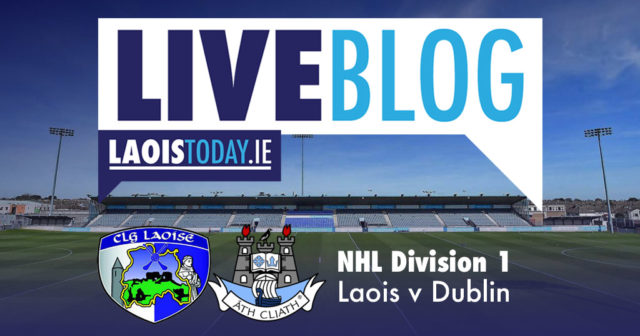 We’re live from Parnell Park as the Laois hurlers get ready to take on Dublin in Round 2 of the National Hurling League.

After last week’s brave performance against Wexford, the Laois senior hurlers are back to work in their league campaign against Dublin in Parnell Park this afternoon.

We all remember the historic win in O’Moore Park last year which saw Laois beat the side but this is a brand new season – different teams, different competition, different time of year and so on.

Laois have named the same team that started against Wexford but have since made two changes.

Ballyfin’s Allan Connolly is in for his first start in place of Ciaran Comerford while Aaron Dunphy is also back.

The Borris-Kilcotton forward is in for Aaron Bergin with the rest of the team unchanged.

He missed the Wexford defeat through suspension following his red card in the All-Ireland quarter final against Tipperary last year.

Dublin have generally had the upper hand in recent years though Laois will take confidence from last year’s memorable All Ireland Qualifier win.

Dublin comfortably won the recent Walsh Cup clash between the two, the first of three meetings this year between the counties in Parnell Park. They will also meet in the Leinster championship in May.