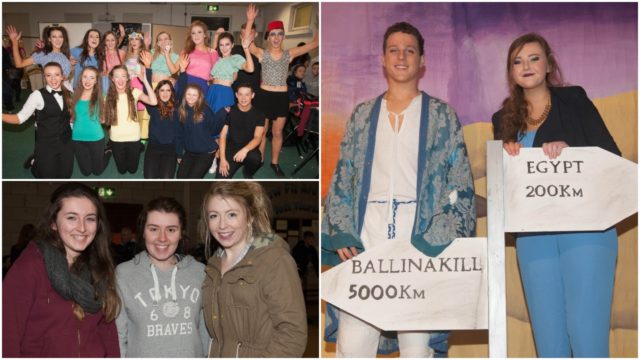 Five years ago Heywood Community School‘s transition year students put on the show of their lives when they staged their musical ‘Joseph and his Amazing Technicolour Dreamcoat.’

The performance ran from February 25 to 27 in the school hall.

Director and Musical Director was teacher at the time Niall Mulpeter.

He said “They put on a fantastic performance, they really surpassed themselves, and were very professional.”

While over half of the students performed on stage the rest could be seen working on stage design, lighting, sound, front of house, marketing and PR.

Joseph was played by Liam Oxley, with his twin brother Eamon playing Pharaoh.

The show was a great success with a near full house every night.

Alf Harvey was there on the night to take some great photographs which feature below.

Heywood have went on to produce some more amazing musicals including ‘Little Shop of Horrors’ which saw Liam Oxley receive top prize in the Best Male Performance in a Leading Role category at the Bord Gáis Energy Student Theatre Awards in May 2017.