Some people will do anything to get elected. Pauline Madigan even changed her name.

Pauline, as we all call her anyway, is now Pauline Flanagan.

It’s not that she wants to be mistaken for the other man, God forbid.

It’s just that the Flanagans are much better known than the Madigans in these parts.

There’s Pauline’s husband Gerry a well-known and popular secondary school teacher in the CBS. We know he’s fierce well liked because he goes as ‘Flano’, according to Pauline’s leaflets.

Then there’s their grown up children Meghan, Frank and Paul – all well known in their own right. All doing their own thing. But for now they too are in general election mode, press ganged into canvassing.

They do it with a heart and a half and brimming with smiles. They like meeting people.

Pauline’s the same. She does everything with a heart and half, with a smile. She too likes meeting people. She has a big heart and she’s putting her heart into this general election campaign.

Pauline lectures in Carlow IT in public relations or PR as us in the communications business call it.

Pauline is good at public relations. Maybe too good.

This is more like calling around to a friend’s house than a canvass. At this rate Pauline is going to need more time to get elected. A lot more time. Maybe the next general election.

We’re out in Portlaoise. It’s only gone six but it’s pitch dark. Canvassing is always a shot in the dark, even more so in a winter campaign.

The target for Pauline’s enthusiastic, energetic and good humoured team are the estates off the Mountmellick Road – the likes of Craydon Court, Newpark, Mill Court. 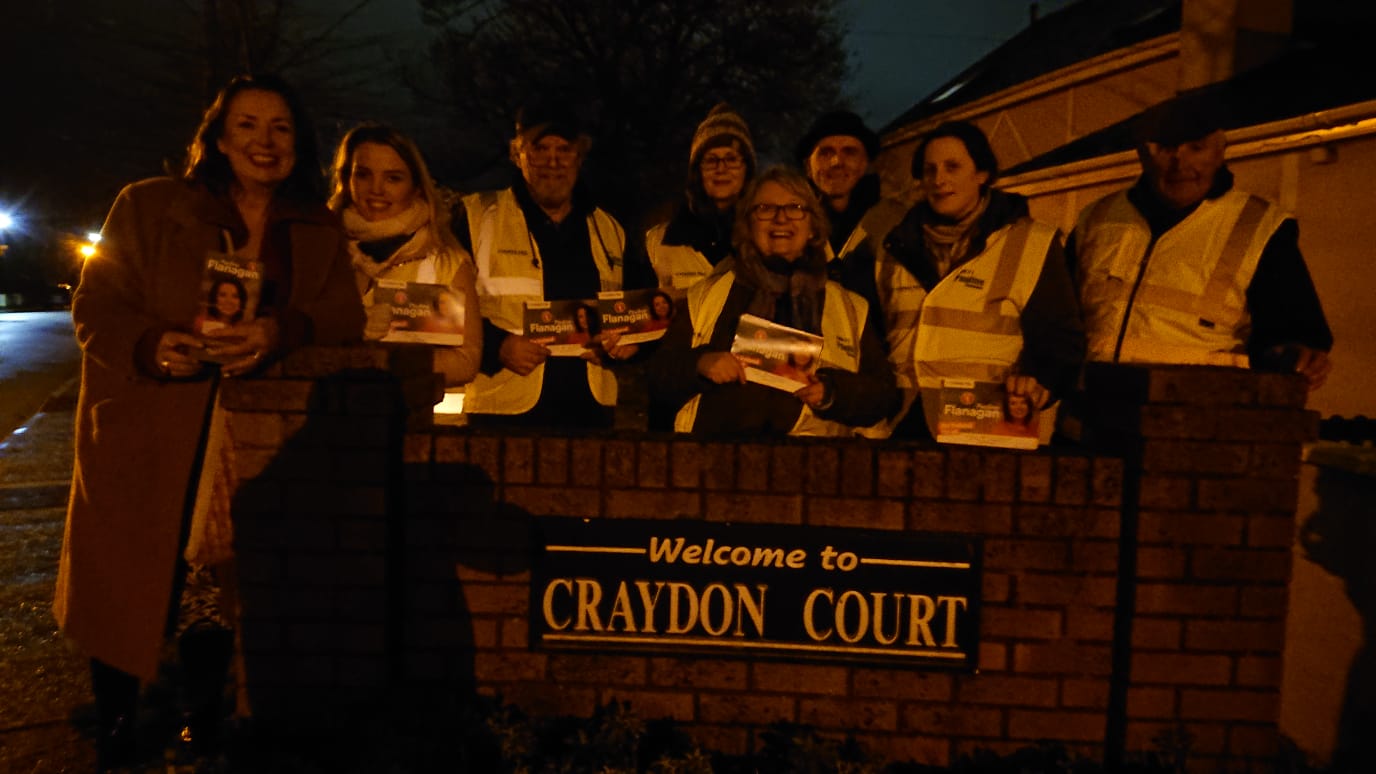 She has gotten a warmer reception on the doors than she has from her own local cumann most of whom still seem to resent her imposition as a candidate by headquarters.

Their noses are still out of joint and they point to Pauline’s poor local election outing last May to rest their case. Pauline struggled for sure polling only 326 first preferences. Between the jigs and the reels and the infighting they lost the ‘Jerry Lodge seat’ to Fine Gael.

Pauline and her team are undeterred. There is some encouragement.

“We used to be all Fine Gael, but that day’s gone. We vote for who we know now and you have our votes and all those associated with us,” comes a welcome boost from someone who knows Pauline through her PR work.

“Someone’s been eating garlic,” she sniffs. “Lots of it,” confesses Gerry. Canvassing is close quarters combat.

“I’m glad you’re nothing to do with that other Flanagan,” cautions another man, adding,

“I’m a Flanagan as well and the amount of tax I’m paying. I’d have nothing to do with that other man. I pray he doesn’t get elected. I definitely wouldn’t vote for your namesake but I’ll give you an ould vote alright,” says this other Flanagan on his doorstep just landing in from work.

Across the road Pauline is all chat to a young woman. She is originally from Lithuania and has been living in Portlaoise for nine years.

“Ah she’s lovely,” says Pauline, “She knows me from Facebook.” The lovely Lithuanian woman is not eligible to vote in this general election.

Another man wants to talk to Pauline about traffic, parking and speeding on the Green Mill Road up off Mill Court. After what seems like an age (and I mean an age) he thanks her for her time and interest; wishes her well and reveals that he is however a Sinn Féin supporter.

Pauline is philosophical about it.

Gerry would be more at home at construction than canvassing. The things you do for love.

Pauline has to leg it. She’s already late for the INTO public meeting up in the Midlands Park Hotel.

She’s running out of time …