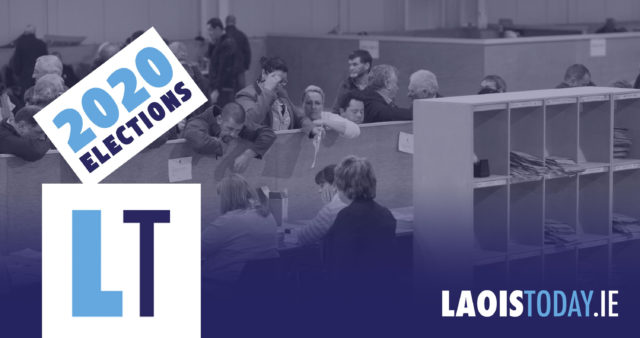 Outgoing Fianna Fáil TD in Laois-Offaly Sean Fleming was highly critical of this Government over the last number of years for creating a time bomb in relation to children with special needs.

“In the past, a lot of work and resources have been provided at primary school level throughout the Country and in Laois to make sure children with special needs and those with autism are fully supported in their primary education.

“However, the Government has utterly failed to plan and ignore the obvious fact that these children when they leave primary school will need to go onto secondary school.

“There are only two secondary schools in Laois with facilities for children with special needs and autism at second level.

“This is a time bomb. All children who will be leaving primary school and going into the secondary schools which are much bigger schools are going to find themselves without adequate services that they have been used to.

“This is going to be a major setback for these children and it will cause phenomenal grief for their families to see that their children are not getting a continuation of service as they progress through the educational system.

“This disgraceful oversight and lack of planning by this Government must be brought to an swift end.”

A meaningful tax cut for low and middle income workers?

Fine Gael is the only party that will give people on low and middle incomes back the money they’ve earned according to Laois-Offaly General Election candidate and Minister for Justice & Equality, Charlie Flanagan.

“People on the average incomes are not rich. They should not be paying the higher rate of income tax,” he said in a statement.

“Fine Gael will, if elected, ensure that workers will not pay the higher rate of tax until they earn more than €50,000.

“Everybody deserves more money in their backpocket. That’s why we will also remove any person who earns less than €20,000 from paying the USC.

“Fine Gael are the only party that is committing to this policy. Every other political party is promising no real tax cuts or tax increases on work; effectively making this worse for people at work.”

‘Fire in her Belly’ to win that final seat

Pauline Flanagan, the only female candidate in Laois in this weekend’s general election, today said that she has more fire in her belly than all the other candidates, and that this hunger matched with ability, may be the key to winning the fifth seat in next Saturday’s General Election.

Pauline Flanagan has said that what has struck her most at the doors are harrowing stories from the cutbacks that have affected parents with children with disabilities, homecarer’s, childcare issues and middle income families simply finding it hard to save for a house whilst also paying for everything else.

“As the only female candidate in Laois, I believe that I have the compassion and the ability to fight for the vulnerable people in Laois and Offaly.

“I also believe that as a new candidate, I have more fire in my belly than all the others and that this hunger matched with my ability makes me the best candidate for people to vote for on Saturday 8th February’, she concluded.

Workers in the midlands

Fine Gael is the only party with a plan that will protect workers in the Midlands, according to Fine Gael TD Marcella Corcoran Kennedy.

“The best way we can ensure that the workers of Bord na Mona, and those who have retired from Bord na Mona, are protected is to make sure that Bord na Mona is a driving force for regional and economic development in the Midlands.

“The next phase of Bord na Móna’s own plan will see a €1.6 billion development programme that will benefit the Midlands.”

Better supports for people with disabilities and family carers

The Social Democrats candidate for Kildare South, Linda Hayden says that people with disabilities have always been an afterthought when it comes to previous Government’s policies.

According to the Central Statistics Office (CSO), there are over 27,768 people with disabilities in Kildare and 11,393 in Laois.

“The Social Democrats are committed fixing a broken system where people with disabilities have to fight for every single thing,” she said.

“We have launched our disability policy today and we believe it could make a real and substantial difference to people’s lives in terms of access to education and employment.

“We are also proposing a minimum of 7% of all social housing to be allocated for people with disabilities”, she said.

In addition to providing equal opportunity for people with disabilities, the Social Democrats are also committed in giving carers a better quality of life.

“Family carers in particular need to be recognised for the phenomenal work they do. Family Carers Ireland tells us family carers provide €10 billion in unpaid care each year.

“These amazing and selfless people don’t get enough support from our Government and it often comes down to organisations such as Family Carers Ireland to provide such support.” 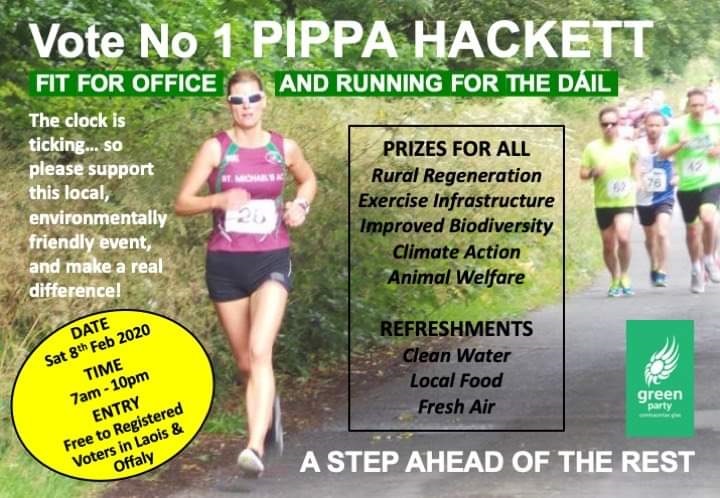 Fit for office? A run with a difference

Pippa Hackett, the Green Party candidate in Laois-Offaly and a current Senator, has posted a very quirky graphic on social media, depicting Saturday’s General Election, like an actual race. A running race.

Pippa and her family are very active members of St Michael’s Athletic Club in Portarlington and her post likens the vote to the many races you see around the country.

“Vote No 1 Pippa Hackett,” it screams above a photo of her on the road in the St Michael’s singlet. “Fit for office and running for the Dáil.

Entry si free for registered voters in Laois and Offaly and it’s all day Saturday – from 7am to 10pm.

Among the prizes, she says, are “Rural regeneration”, “improved biodiversity” and “animal welfare”. The refreshments, says the image, are clean water, local food and fresh air. 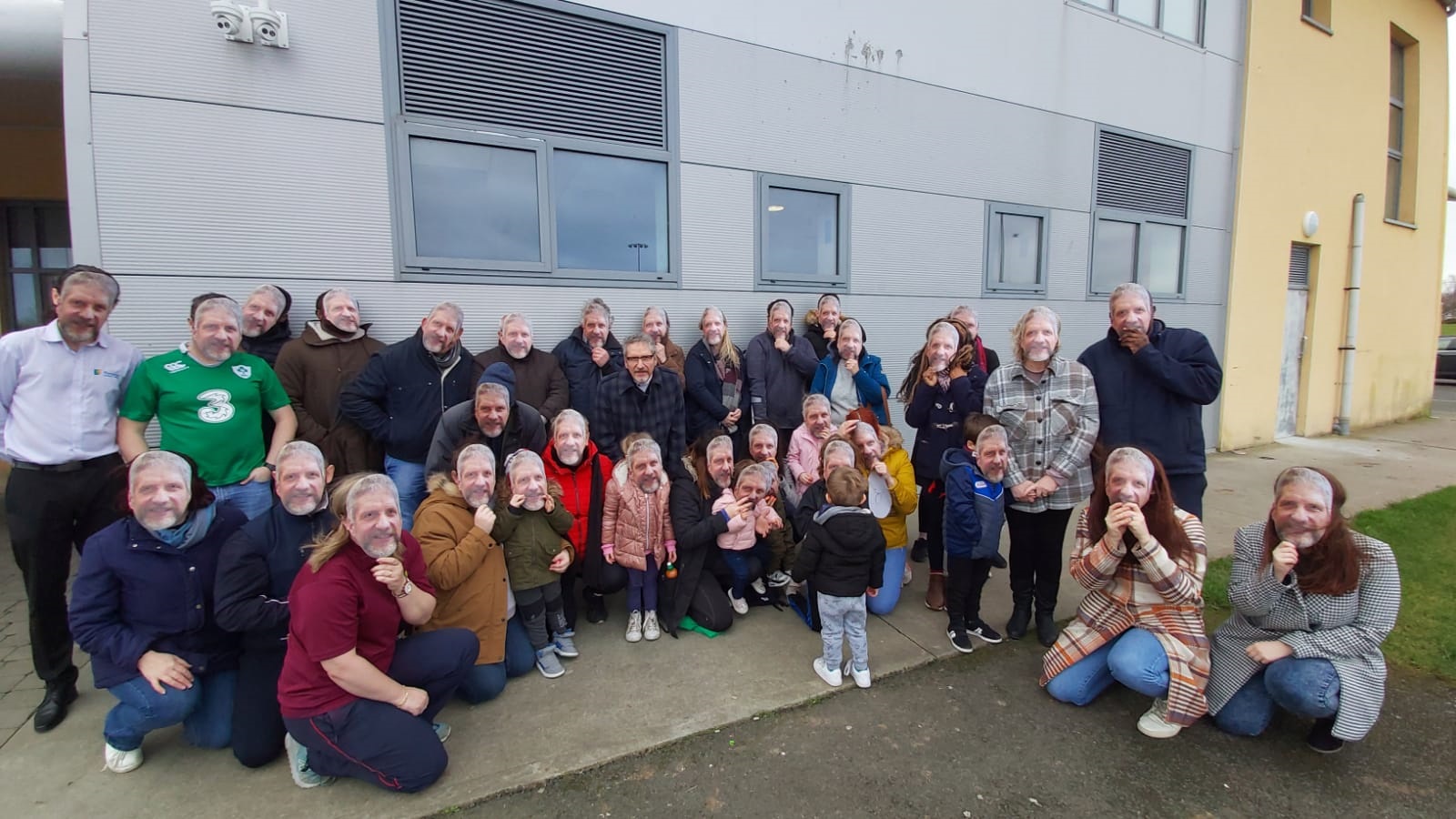 There’s only one Noel Tuohy – or is there?

To properly canvass everywhere in the Laois-Offaly constituency, you’d nearly need an actual clone – or a couple of them.

Cllr Noel Tuohy, who is running for Labour in Laois-Offaly, could be on to something.

His team of over 30 canvassers posed for a photo outside the Portlaoise Leisure Centre on Saturday with all of them wearing Noel Tuohy masks.

Cllr Tuohy got over 1,000 votes in the Local Elections last May, an increase of over 50% on his first election success in 2014. 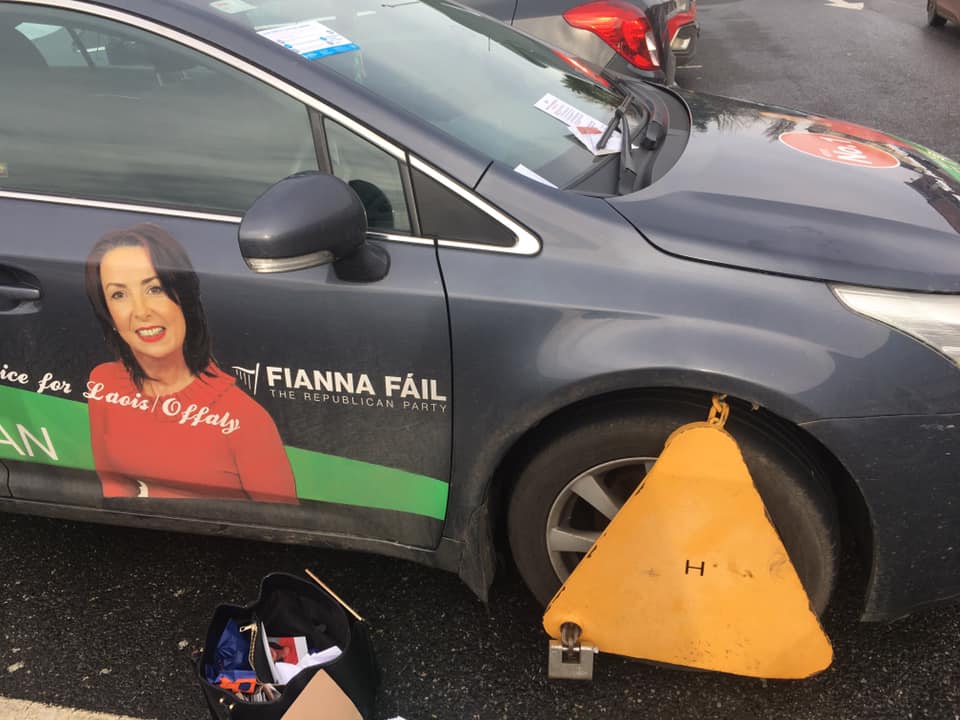 Anyone that has ever been clamped will know the frustration – with yourself, with the system, with the fine!

The afore-mentioned Pauline Flanagan was done last week when she was in Tullamore at an event for people and families with disabilities, organised by the Muiriosa Foundation.

“But I don’t care,” wrote Pauline on Facebook alongside a photo of her branded car.

“Because I got it after spending extra time with people/families with disabilities who are affected by due to budget cuts.

“It’s a disgrace what’s going on,” she added before a ‘Put Pauline into Power’ plea. “I will fight but I will also have the ability to have your backs.”

After Dublin and Cork, Limerick is Ireland’s third biggest city so it’s no surprise that they’ve produced high-profile TDs over the years.

Having been first elected in 1981, Michael Noonan is not contesting this election. O’Dea, elected in 1982, is going for his 11th straight election success.

Fine Gael have two Senators on the ticket – former TD Kieran O’Donnell and former mayor Maria Byrne (of the famed Bobby Byrne’s pub – Bobby, her father, was a Fine Gael mayor of Limerick) is the Michael Noonan candidate.

Willie O’Dea has a running mate in Cllr James Collins while also expected to be in the running is 38-year-old Brian Leddin of the Greens, whose family are rooted in Limerick politics. His mother Kathleen was an independent councillor while his late father Tim was a Fine Gael councillor!