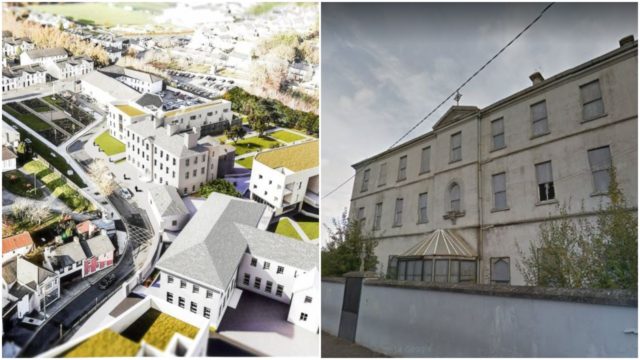 Approval has been given for work to advance on a major new social housing development and ancillary services in the heart of Portlaoise town.

The project at Church Avenue in Portlaoise is made possible by the gifting of the site to the local authority free-of-charge by the Presentation Sisters.

Their only stipulation was that the site be used for social housing for the benefit of the community.

It is a proposal which has been in discussion and under consideration for a long time and it is now finally coming to fruition.

The Council are partnering with Sophia Housing the approved housing body to make it all happen. The budget is about €10 million and the new accommodation could come available towards the second half of 2021.

The residential development on the former convent site envisages 52 dwelling units, consisting of 4 houses and 48 apartments in 6 separate blocks contained on the 1.35 hectare site at Church Avenue in Portlaoise.

The development will involve a new access road from Church Avenue at the existing school entrance.

The project will include the conservation and redevelopment of the former Presentation Convent building which is a protected structure and the Sacred Heart school buildings. Some of the buildings to be preserved and restored date back to the 1860’s.

Cllr Thomasina Connell who is chair of the Council’s Housing Strategic Policy Committee hailed the development as an important aspect of the regeneration of the town centre. The development takes place in tandem with progress on other projects in the cultural quarter of the Town including Fitzmaurice Plaza and new county library on the former Shaw’s site.

The accommodation on the former convent property will be prioritised for elderly or disabled people with an emphasis on one and two-bedroom units.

Chairman, Cllr Willie Aird acknowledged the role of the nuns in providing the site free of charge to the community and the emphasis they had placed on social inclusion in any development.

Cllr John Joe Fennelly described the project as fantastic and it was high praise too for the nuns from Cllr Mary Sweeney.

Cllr Catherine Fitzgerald said the plans for the redevelopment of the old convent site were the best she had ever seen and she commended the Presentation order for the outstanding contribution and donation they had made to the community.

Cllr Noel Tuohy observed that the clergy often come in for a lot of criticism and this was an example of the great work they do.

Cllr Caroline Dwane-Stanley felt it was a fantastic development which would enhance the status of the Town and she was glad it was so near the town centre and Main St.

The CEO of the local authority, John Mullholland said that the scale and scope of the development created a real sense of urban renewal at this central location.

He was delighted that it would provide hope and a home to 52 people and would primarily cater for one and two-person families. He too commended the massive contribution of the Sisters and he was pleased the development was so convenient to the town centre and services which also helped made it conducive to climate action.

Chairman Willie Aird said it was great that people were being brought back to life in the heart of the Town.

The accommodation planned for the former convent site in Portlaoise will provide 52 units and these are among approximately 500 units the Council has in its design and planning pipeline at present.

About 180 housing units are due for completion within the 2020 calendar year.

There are an estimated 1,700 currently on the housing waiting list in Laois.

SEE ALSO: No simple or quick solutions to flooding flashpoints in Laois towns